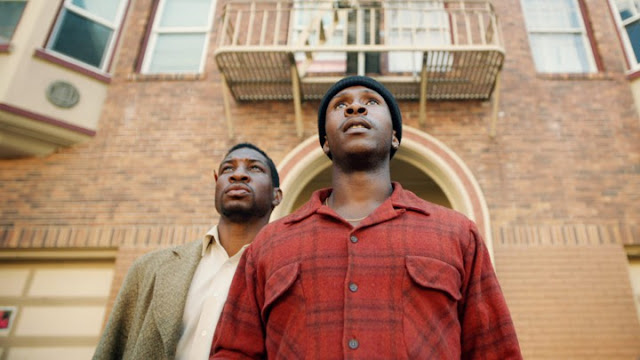 In June of 2019, the median monthly rent in San Francisco reached an all-time high: three thousand seven hundred dollars. Simultaneously, reports of an increasing homelessness problem in the city abound. San Francisco has evolved, unwaveringly, into a land of economic extremes–a desired home for the haves and a dubious haven for the have-nots. (3,700 dollars a month would land you a leafy pile on the St. Johns River in my hometown of Jacksonville.) Perhaps this startling economic disparity makes The Last Black Man in San Francisco, which opened in June, even more urgent. The film was conceived by Joe Talbot, making his directorial debut, and actor Jimmie Fails, playing a version of himself: a young black man with an obsession for a house. Not just any house: his childhood home in San Francisco’s Fillmore district, a house which, Jimmie informs us, his grandfather built with his own two hands.

Even though Jimmie’s family was forced to leave when he was very young, he visits every other week, “fixing” the property and the exterior, to the confused dismay of the current tenants, a middle-aged white couple. It’s an act of preserving not just the house, but himself. The current residents don’t know, or don’t care about, the house’s history. Only Jimmie’s best friend, a playwright named Montgomery (Jonathan Majors) understands his connection. When the house becomes vacant, Jimmie and Mont claim squatters’ rights, gathering all the old furniture from storage, and recreating the past.

The Last Black Man in San Francisco opens with a close-up of a girl, looking down. As the camera retreats, we see the object of her attention: debris that’s been culled from the Bay, by a man wearing full protective gear. Nearby, a man in his 30s stands on a crate on the side of the road, ranting about the poisoned water, like a preacher sermonizing to an empty church. Jimmie and Mont watch him from the bus stop (a mound of grass by the side of the road). “Does he do this every day?” they wonder. The bus seems to be in no hurry, so the two men take flight on Jimmie’s skateboard, and as they weave through the streets of the city, the film’s poetic imagery (framed by Emile Moseri’s totally gorgeous music score), you feel dazzled and haunted and drawn into the vibrant world of this film with such totality that you can’t help but be overwhelmed.

The city of San Francisco has long been a fertile ground for the movies; in fact, it’s almost as prolific a city as Hollywood itself. Hitchcock, of course, marshaled its haunted mythology to great effect in Vertigo, and Philip Kaufman transformed its bold, unapologetic eccentricity into a source of terror in the 1970s remake of Invasion of the Body Snatchers. But The Last Black Man in San Francisco may be the first film to fully capture the poetry of San Francisco. Cinematographer Adam Newport-Berra deserves much of the credit here for grounding us, wherever we are: he wows us with the city’s architectural funkiness, sure, but he never loses sight of the human connection, whether it’s Jimmie and Mont crammed in Mont’s converted bedroom, or Jimmie emerging from a secret room in his grandfather’s house to scare an unsuspecting couple taking a tour of his lost family house, not on the real estate market, or a naked homeless man sitting next to Mont at a bus stop. (Their conversation is amusing because Mont has absolutely no reaction: this is apparently not the first time he’s seen something so unusual.)

We’re not likely to emerge from the theater thinking of San Francisco as “a character in its own right,” the way people talk stupidly about really New Yorker-y movies. San Francisco as depicted in The Last Black Man is much more than that. For Jimmie, it’s a canvass, a battleground, and a home. It’s all of these things, mind you. As dehumanized as the city has made Jimmie, he can’t seem to let go of it, even though he probably ought to. “Fuck San Francisco!” one of his relatives jeers, and Jimmie wrestles with whether or not to embrace this mantra. Later, on a bus, Jimmie overhears two rusty young woman, obvious transplants, complaining about living in San Francisco. “We should just go to L.A.,” one of them sniffs. Jimmie responds: “You have to love it to hate it… Do you love it?” You don’t have to be from San Francisco to understand Jimmie’s point. You just have to be from somewhere.