"Blindspotting" channels its exuberant anger like no other film this year. 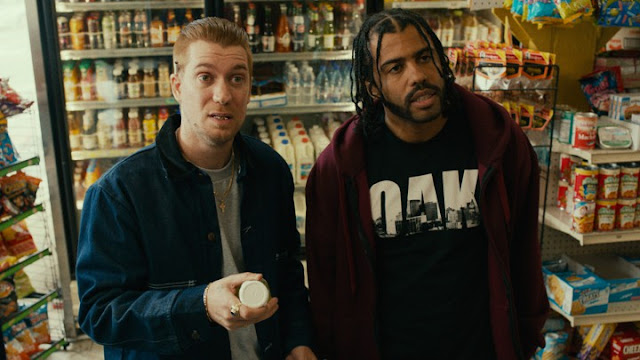 “Kill a hipster...Save your hood.” These words, stenciled on a T-shirt Miles (Rafael Casal) wears in the exuberant comedy-drama Blindspotting, capture this film’s deliriously funny and dark sensibility. The film takes place in Oakland, California, which is apparently experiencing a hipster invasion. At the beginning of the film, when Miles and his best friend Collin (Daveed Diggs) are at the grand re-opening of their favorite fast food joint, Miles discards a vegan hamburger on the ground in disgust. “Did you specify that you wanted meat?” a well-meaning employee asks. Miles is apoplectic, and Collin has to defuse Miles, whose short temper is always getting Collin in trouble.

The friendship between Collin and Miles is somewhat problematic, especially for Collin, because Miles is white (although he affects a “wigga” accent) and Collin is black. This is because Miles, being white, has the luxury of being allowed to lose his temper without serious consequences. Not so for Collin, who’s been serving a year of probation (after doing hard time for a felony) for just that. The film takes place during the last three days of Miles’s probation: for the past year, he’s been confined to special housing for ex-convicts, and must adhere to a strict eleven o’clock curfew. From the beginning, we feel tense in our awareness that something is going to get Collin back in jail, and more alarmingly, something he has little control over. We see this almost immediately, when Collin finds himself in the backseat of a car as Miles, riding shotgun, peruses a mutual friend’s arsenal of illegal handguns for sale. Miles waves a pistol around like it’s a toy as Collin nervously begs to be let out of the car. But as much as Miles may be in some ways a bad influence for Collin, their friendship is the heart of this movie, and we find ourselves rooting for it to survive its own self-defeating elements.

The infinitely quotable Blindspotting is perhaps my favorite movie of 2018. It marks the feature directing debut of Carlos López Estrada, and was co-written by its two stars, Daveed Diggs and Rafael Casal. Diggs and Casal reportedly worked on the script for nearly a decade, and the result is a movie that feels lived in, both in terms of its characters and in terms of its humor. This is a movie that, likes it main characters, seems to be having a party in its head, even as it addresses heavy, urgent issues like racism (Collin witnesses a black man being gunned down by a white police officer, and it begins to haunt him, especially because he feels powerless to report what he saw), gentrification (an issue that’s more complex than one might think: Collin’s mother, on moving: “Why would I leave now that there’s finally good food in this neighborhood?”), and, in the end, the ways that people perceive us based on our race and class.

As a director, Estrada seems equally adept at shaping tensely dramatic moments or loose, giddy comedic riffs, like when Collin and Miles walk down a lonely street late one night, making up raps, partly for their own amusement, but also, as a way of expressing the frustrations they feel powerless to mitigate. These are both men who’ve been shaped by circumstance. We never really understand why Miles has chosen to act like a black man, but it’s his identity, and his friends seem to accept him. But Collin’s ex-girlfriend Val (Janina Gavankar) urges him to dump his buddy, who may impersonate a black man, but ultimately enjoys the rights and privileges of a white man. For Miles, such luxuries simply do not exist, at least not on the same level. Never before has a film channeled its anger with such brio, wit, and heartbreak.

by Jacob Lusk @ pannedreview
Email ThisBlogThis!Share to TwitterShare to FacebookShare to Pinterest
Tags 2018