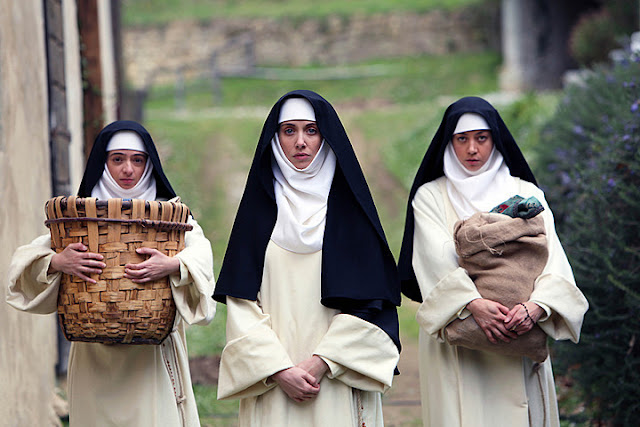 The Little Hours, a happily deranged comedy from writer-director Jeff Baena, doesn’t always work, but you have to admire the movie’s exuberant madness. It is by turns a Monty Python-esque period spoof, an improv comedy wet dream (the dialogue is mostly extemporized, the setting deliberately anarchic), and a philosophical meditation on the nature of existence. (It’s based on two stories from The Decameron.) The film is set in a Medieval convent somewhere in the Italian countryside, where three nuns, named Sister Alessandra, Sister Fernanda, and Sister Genevra (Alison Brie, Aubrey Plaza, and Kate Micucci, respectively) experience a sexual awakening. These three nuns look out upon their drab, cloistered little world with a kind of yearning that they can barely put into words. Then along comes the hunky young serf Massetto, (Dave Franco), who’s on the run from his angry master, Lord Bruno (Nick Offerman) after sleeping with the man’s wife (the delightful, snarky Lauren Weedman, whose dialogue is the equivalent of an endless series of glaring eyerolls).

The three sisters are all immediately drawn to Massetto, partly because he’s pretending to be deaf and mute, a ruse devised by the priest (John C. Reilly) who runs the convent. Massetto’s silence is for his own protection, against the volcanic temper of Sister Fernanda. Early in the movie, when she and the others are passing by the previous gardener, she unleashes her comic fury, hurling curse words and turnips at him because she dislikes the convent food. The allegedly deaf-mute Massetto, non-threatening yet smoldering, emboldens the women to act on long-repressed sexual desires.

Then again, what would you do if the puppy-eyed, svelte Dave Franco showed up at your doorstep? Genuflect by day, and carouse by night, of course. The sisters, it turns out, are far more evolved than perhaps even they realize. It’s as if they’ve been waiting for something to set their desires into motion. And Sister Fernanda, in particular, isn't content with washing garments and tending the garden and saying her morning prayers: When she whips up a love potion using belladonna weed, she has more on her mind than romance: Sister Fernanda is part of a coven of witches, and she has her eye on Massetto as a potential sacrifice for an upcoming fertility ritual (!).

Even though The Little Hours can be jarring in its tonal shifts (the movie may be guilty of trying to be too many things), it’s never boring, and the performances have an other-worldly quality, partly because the dialogue is all modern. This anachronistic touch works especially because Baena doesn’t rely on it too much. The fact that Plaza, Brie, and Micucci talk like women from 2017 who’ve been transported back to 1398 (they curse like sailors, or perhaps teenagers posting selfies on Instagram), is a gimmick, but not the film's only source of comedy. It’s just a device made to loosen things up, so that Baena and his cast can explore and make fun of the world they've created, including the ways that the characters (and by extension, most humans) compartmentalize their lives. For example: John C. Reilly's priest, who’s in love with the soft-spoken mother superior (Molly Shannon). Their love isn’t portrayed as sleazy or clandestine; it’s longing and tender, and almost tragic in the way the romance in Brokeback Mountain was tragic, because it’s arbitrarily forbidden by the culture in which they live. The performances alone make The Little Hours worth seeing. All three of the leads seem to be harboring little sticks of comic dynamite inside them, and you never know when the next explosion will happen. All you can do is wait for one of them to get that look in her eyes.
by Jacob Lusk @ pannedreview
Email ThisBlogThis!Share to TwitterShare to FacebookShare to Pinterest
Tags 2017, Alison Brie, Aubrey Plaza, Dave Franco, Fred Armisen, Jeff Baena, John C. Reilly, Kate Micucci, Lauren Weedman, Molly Shannon, Nick Offerman, Paul Reiser