"The House" goes too far, which is exactly what comedies should be doing. 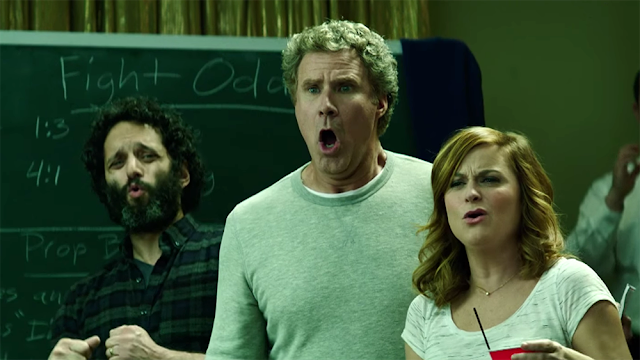 In The House, straight-laced suburban couple Kate (Amy Poehler) and Scott (Will Ferrell) Johansen, strapped for their daughter’s college tuition, go into the casino business with their self-destructive friend Frank (Jason Mantzoukas), whose wife is leaving him and whose house is about to go into foreclosure. Their venue: Frank’s nearly empty house (the wife took all the furniture except for some chairs and a TV), which looks a little bit like the one from The Brady Bunch. Their clientele: all of their friends and neighbors in the sleepy little community of Fox Meadow. Fox Meadow, a perfectly manicured hamlet of square houses and square people, feels utterly boringly real, and the movie quickly recasts both the people and the place in a new, delightfully alarming alternate universe. The House envisions suburban America as a prison in which “keeping up with the Joneses” is really just a form of self-imprisonment. The movie’s mission? Parole, for very bad behavior.

The House, though an imperfect comedy, has a delightfully dark and looney sensibility. The director, Andrew J. Cohen, co-wrote Neighbors (2014) with Brendan O’Brien, and they reunited for the screenplay on The House. Both Neighbors and The House have something that most other recent comedies lack: a willingness to descend into madness and never return. There’s no big attempt at reforming the protagonists once they delve into their bizarre business endeavor.

And this trio, Poehler, Ferrell, and Mantzoukas, is weird in all the right ways. They embrace their glamorous life of crime just as you would expect suburban people to do so: to them, it’s as if they’ve somehow traveled into an episode of The Sopranos. Their homegrown casino suggests a lurid, grown-up fairy tale, and also the adult equivalent of a Looney Toons short.

Frank is the self-destructive one, and the catalyst for Kate and Scott’s own descent into transgressive behavior. But they’ve always had this urge in them. They’re weirdos at heart who’ve been in suburbia for too long. We get hints of this by their interactions with their daughter, Alex (Ryan Simpkins), like when they try to inform her about date rape with an improvised “scenario” that goes horribly wrong.

The turning point is the scene in which Will Ferrell accidentally chops off a customer’s middle finger with an axe in Jason Mantzoukas’s garage. They have just caught the man counting cards, and in a hasty decision, they strong-arm him out of the casino with plans to scare him. But he’s a legit criminal who works for some tough crime boss (Jeremy Renner, who figures in a hilarious cameo in the third act), not at all intimidated by these three “soccer moms” as he calls them. Scott, who has so much repressed rage (or is it merely repressed passion from the dullness of his very normal life?) strikes, intending to scare the man, but instead hacks off his finger. And then, in full-on Italian splatter movie style, blood spurts everywhere, dousing Ferrell’s face as he screams in horror at his actions. That’s when people start calling him “The Butcher,” and acquires a new degree of fear-based respect from his neighbors.

But it’s not just Ferrell’s character who’s transformed by their foray into illegal gambling. The casino brings out the Id in everybody: two men engage in a knock-down-drag-out fight, but before they can commence, the other customers turn it into a betting war, and the “house” begins to host fights between neighbors; two women, who have fired passive aggressive shots at each other in town hall meetings past, take their aggressions to the ring, in an amazingly brutal, uncomfortable scene.

So few comedies have the courage of their convictions. They want to shake things up temporarily but then restore normalcy. (This is the Judd Apotow syndrome, and it has had a deadly effect on the genre.) But The House wants to tear “normal” to shreds. The new identity that Scott and Kate have formed for themselves reignites their passion for each other, their sense of being alive. The House goes too far, which is exactly what comedies should be doing. We’ll figure out the boundaries later.