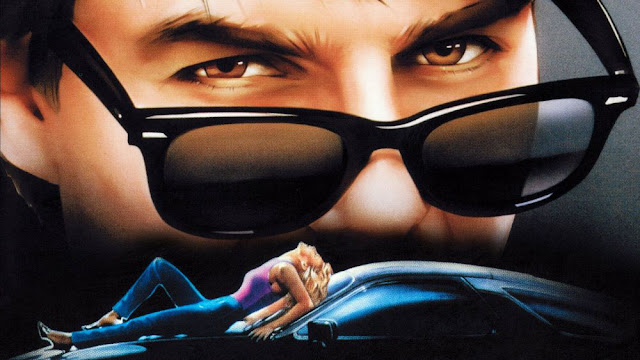 Nearly 35 years later, Risky Business seems hardly to have aged at all. It was the 80s’ answer to The Graduate, a youth comedy having an existential crisis, and featuring an emerging star, Tom Cruise, who even resembles Dustin Hoffman, especially when he sports a pair of dark sunglasses atop his hawkish nose. But there’s a difference between the actors, too: Hoffman has a subdued quality that he occasionally overcomes; Cruise is manic, perpetually revved up, which makes his character, the careful, obedient Joel Goodson, all the more inviting: When his parents go away for a week, Joel turns on the stereo and struts around the living room in his skivvies to Bob Seger’s “Old Time Rock and Roll”; it’s one of the sexiest moments in the movie, not to mention an iconic scene for the 80s.

Surely this was the moment when audiences knew a star had arrived. And say what you want about Tom Cruise (he’s taken a good bit of unfair shellacking from fans and critics for a long time): the man has star power. And he's totally believable. You have to stretch your imagination ever so slightly to believe that Dustin Hoffman’s in heat for Anne Bancroft in The Graduate, but we can practically feel Tom Cruise’s racing pulse when he encounters Lana, the upscale call girl who turns his life upside down.

When Lana, played by the startling, icy-tender Rebecca de Mornay, enters the Goodson residence (a stately WASP-nest in suburban Chicago), it’s like a fever dream, practically lifted from a horror movie, with an eerie wind blowing the French Doors open, and leaves rustling and spilling into the house, and Joel, vulnerable yet expectant, lying on the couch, waiting for his unknown lover to come and ravish him. (Not before he’s visited by a male escort in women’s clothes, in a surprisingly hip and amusing scene.)

Like Cruise, Rebecca de Mornay was unknown at the time Risky Business premiered, but her performance shapes the role into something meaningful and magnetic. She’s not a floozy. De Mornay gives Lana a cool, powerful moxie that is both a turn-on and a foil for Joel Goodson, the boy with too many desires and not enough outlets for them. He’s goaded by his buddy Miles (80s teen comedy favorite Curtis Armstrong, of Revenge of the Nerds), who gives Joel a big speech about letting go, saying, “what the fuck” every once-in-a-while. When Joel finally heeds these words, disaster after disaster unfolds: Lana purloins his mother’s priceless glass egg (a ridiculous accoutrement that sits on the living room mantel); Joel sinks his dad’s porsche into Lake Michigan; and, seeing an ideal market in Joel’s steamed-up high school buddies, Lana turns the Goodson house into a makeshift bordello. Risky Business has a deliciously complex view of American values, which are inherently hypocritical when it comes to sex: Joel imagines the police encircling his house because he’s got a girl in his bed; it’s sexual policing, and he’s been caught red-handed. (The neon sign burning over his window casts an X-rated hue over the night scenes in Joel’s bedroom.)

Risky Business has been advertised as a comedy for far too long, with that famous Tom Cruise underwear-dance suggesting a lightweight tone akin to Sixteen Candles. Not that I have anything against comedy, but Risky Business defies genre-labeling, and so to expect this movie to be Porky's, for instance, is to invite disappointment. Of course, the movie is funny at times (and its sensibility is often comical), but director Paul Brickman’s vision is darker and more complex. Unlike Ferris Bueller’s Day Off, a movie that reinforces the underside of capitalism (because Ferris is a spoiled upper-middle-class kid with no conscience who gets everything he wants), Risky Business has a deep discomfort with the capitalistic age of the 80s, and Joel becomes a vehicle for that discomfort.

Joel’s teenage angst is transmuted into a deeper, richer kind of angst, one that will probably stay with him past his youth. He's afraid of the future, afraid of making a mistake, and it's pretty clear that in Joel's world, one slip-up could destroy everything else. If many of those lighter 80s comedies are beloved classics in their own right, Risky Business stands apart from them in that it’s more complicated and adult in its sensibility, and as such it asks more troubling questions, without pandering to its audience like The Breakfast Club, which concludes that teenagers are right about everything. Risky Business exposes the hypocrisy of adults without congratulating the adolescents for their purity: Most of them are just as corrupt, as we see in the scene when Joel’s friends announce their plans to “make a lot of money,” and he’s struck by their brazen materialism.

But that tug-of-war between making money and being happy–and making a contribution to the world–rumbles in Joel’s mind too. He’s terrified of ruining his life, of not getting into Princeton and making a good living, but he’s also terrified of becoming his parents. And Paul Brickman does not provide easy answers. If one of the marks of a great movie is its lingering effect on us, Risky Business may in fact be a great movie. This movie transfixes us, and we wonder about the characters. What became of them? What did they accomplish? Did they end up together or apart?

The absurd (and funny) ending (another iconic moment) when Joel must buy back all the furniture from his house, which has been stolen by a vengeful pimp named Guido (Joe Pantoliano), adds to the film's otherworldly, out-of-body-experience vibe. And Brickman uses Tom Cruise’s narration, conveying a cynical hopefulness, and Tangerine Dream’s great neon waterfall of a score, to great effect. It's hard not to fall under the spell of this movie, and so we too are walking around in a dreamlike state, just like Joel. It's like a John Hughes teen comedy mixed with a Michael Mann thriller with a little Buñuel surrealism thrown in for good measure. Risky Business has the makings of great pop cinema: it is distinctly American, it is cool and sexy and bold, and it pushes us, making us feel things we don’t expect, bending genres, taking unfamiliar turns down dark alleys, and all the while, we're confident that this movie knows exactly what it's up to.