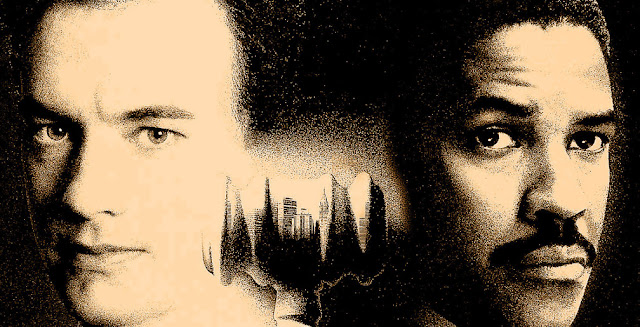 Jonathan Demme’s passing has already been noted – by writers far more qualified than me. But I want to offer a few words on his films, particularly Philadelphia, which I just recently watched. Encountering Demme’s work in the way I have, in a random and unpredictable fashion (more on that later) reminds me how much of my film knowledge has been accumulated in haphazard, almost nonsensical ways, devoid of historical context. I saw Demme’s slick, terrifying thriller Silence of the Lambs (1991) years before I saw his wacky, clever comedies Married to the Mob (1988) and Something Wild (1986). I haven’t seen Melvin and Howard (1980), the film which put Jonathan Demme on the map, or Stop Making Sense (1984), the Talking Heads concert movie that remains one of the most critically acclaimed concert movies ever. And this week, for the first time, I sat down and watched Philadelphia (1993). I knew enough about Philadelphia to feel as though I’d seen it. My parents used to watch it frequently, or at least my vague memories suggest that Philadelphia was on the rotation cycle. They like Tom Hanks and Denzel Washington. My family is conservative and Evangelical Christian. We were raised to believe that homosexuality is a sin. We were probably taught that AIDS was something bad people got (although I don’t remember my own parents saying this, thankfully) because they had it coming.

I sat down to watch Philadelphia partly because it was mentioned on the Slate Culture Gabfest’s recent episode about Demme. But more importantly, I needed to watch something depressing. I was in the throes of an unbearable depression, and I thought maybe if I watched enough sad movies, I could just let the pain bleed out. Is anything sadder than watching Tom Hanks, the Everyman of the 90s, die of AIDS? Is there anything more gratifying than watching Denzel Washington, the other Everyman of the 90s, defend him in court?

I wept. But I don’t think Philadelphia is a great movie. I used Philadelphia because I knew it would milk the tears out of me, and the movie did its job. But I don’t feel the same affection for it that I feel for other sad movies that I love, like Manchester by the Sea and You Can Count on Me, or Moonlight, or Ordinary People. Philadelphia exists on some other plain for me. It’s a very well-made and socially conscious movie with two great actors, and as much as this movie makes me feel its pain, it’s hard not to feel its intentions, which are admittedly very good intentions, announcing their presence.

Philadelphia exists to show homophobic people that gay people are human beings. It’s not the most complex depiction of gay people, and it’s certainly dated nearly 25 years later, but there’s an undeniable power in its grim slick Hollywood texture, in the choice of Tom Hanks, a comedy star, to play this lawyer who’s fired by his firm for being gay (and afflicted with AIDS). The homophobic man (or woman) is asked to identify with the Denzel Washington character. Washington plays Hanks’s lawyer, a local TV celebrity who despises gay people even as he defends one. Washington’s performance reminded me of his character in Fences, a character I really found insufferable. But, unlike so many lofty yet hollow message movies, Philadelphia has a real, beating heart, and that is the heart that Jonathan Demme infused into all of his movies. Even in something as unsuccessful as Ricki and the Flash, Demme’s final film, he could make us care about the characters. We move beyond congratulating him for having lofty social intentions, and just feeling like we’ve spent two hours getting to know a few people exceptionally well. So even when Demme doesn’t succeed, or partly succeeds, his work is always worth watching. As so many people have already mentioned, Demme cared deeply about human beings, and this is the thread that runs through his diverse body of work.

In fact, the most moving part of Philadelphia may be the opening credits, where we see a montage of different locations in the city, all of them populated by people: walking to work, cooking dinner, playing in the streets, cajoling and carrying on, hobbling with grim seriousness: the sequence is a moving portrait of all the varied pulsating little threads of human life that make up a city, punctuated by Bruce Springsteen’s moving, hymn-like pop ballad, “Streets of Philadelphia.” Where much of Philadelphia feels weighed down with grim importance, this opening sequence feels vulnerably light and almost sacred. What a gifted filmmaker we have lost, who could put so much thought and feeling into so many different kinds of movies.

As Peter, Tom Hanks gives a moving performance. (And of his two Oscar-winning performances, I'll take this one over Forrest Gump any day.) I think I admire him more for making the choice to play an openly gay man (whether it was a calculated choice or not), than I like the performance, as good as it is. (And trust me, I wept like a baby at the end of the movie.) But there are other performances that I savored more, like Mary Steenburgen as the opposing attorney, who tries to discredit him for being "reckless," or Jason Robards, playing his boss at the law firm, the typical old Philadelphia fogey who bristles at the thought of allowing a gay man into his fold, or darling Joanne Woodward, who doesn't have enough screen time, as Peter's mother.

But we must bear in mind that just because a movie has a walloping emotional effect on us, that doesn't make it a great movie. Philadelphia is a pretty good movie, with some great parts. In less capable hands, Philadelphia would have been a real mess, too content in its own liberal-mindedness to actually reach people. As it is, I think Philadelphia is the kind of movie that actually might change some people's minds, and more importantly, their hearts. Even if it's not a great movie, that's good enough for me.
by Jacob Lusk @ pannedreview
Email ThisBlogThis!Share to TwitterShare to FacebookShare to Pinterest
Tags 1993, Denzel Washington, Jason Robards, Joanne Woodward, Jonathan Demme, Mary Steenburgen, Tom Hanks