An Evening with John Waters 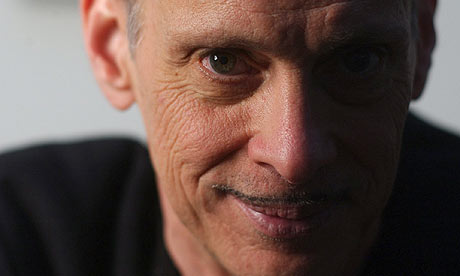 John Waters still has it: that gleeful transgressiveness that makes him one of the most delightful personalities working in entertainment today. Nowadays, Waters does a lot of touring (because making movies has become almost impossibly expensive). Last night, Waters came to Jacksonville and treated a sold-out theater to a live commentary of his 1994 film Serial Mom, the deliciously nutty Kathleen Turner vehicle, in which she plays a suburban Baltimore housewife who becomes addicted to murder. The event was held at Jacksonville’s beloved independent movie theater, Sun-Ray Cinema, as part of their inaugural Sleeping Giant film festival.

Sun-Ray Cinema has been working hard to bring a vibrant film culture to the city of Jacksonville, and last night was a reminder that they’ve more than accomplished their goal. All this weekend, movie-goers can attend a variety of eclectic film programming at Sun-Ray, ranging from new release features and documentaries to repertory films, including Serial Mom, Donnie Darko, and the Herschel Gordon Lewis exploitation classic Blood Feast. (You can check out the festival’s website for more information about the schedule for this weekend.)

Of course, the pièce de résistance of any event is the appearance of John Waters, the Prince of Puke, the Pope of Trash, the Duke of Dirt. A man whose movies have delighted and enraged movie-lovers (and movie-haters) for decades. (Also, have you read his books? They’re fantastic.) Waters appears in a bright-orange-red suit with a red tie (he has always possessed a sense of fashion daring), and suddenly I’m ashamed for coming to this event in a t-shirt and shorts like some cretin; where is the reverence that our self-called “Filth Elder” deserves? In fact, I’m amazed Sun-Ray Cinema patrons didn’t burn incense, and imbibe the elements (a single leaf of arugula, which is what John Waters says he would have for his last meal, were he ever given the death penalty), for this movie-goers' mass, a sacred night in any psychotic cinephile's calendar. But I digress.

As the production logo appeared, Waters remarked, “That company [Savoy Pictures, which financed Serial Mom] is out of business. Probably partly because of this movie.” The audience laughed; we cheered every time a familiar name appeared on the screen: Kathleen Turner, Ricki Lake, and of course, the Dreamland players, performers who’ve been working in John Waters’ movies for years, such as the great Mink Stole, and more recent Dreamlanders like Patty Hearst (playing a jury member here). As the names of longtime collaborators behind the camera appeared, Waters spoke fondly of them: the now-deceased costume designer Van Smith, production designer Vincent Peranio, and his longtime friend and casting director Pat Moran, who’s made a name for herself in their native city Baltimore. These people are part of a cult that any self-respecting Waters fan wishes he or she could belong to.

John Waters was seated in the front of the auditorium, illuminated under a slightly green spotlight, the perfect color for a man like Waters, who made his reputation with offensive, naughty, “sick” movies like Multiple Maniacs (1970) (recently re-released in theaters and now on Criterion Blu Ray and DVD), Pink Flamingos (1972), and of course, his more mainstream films Hairspray (1988) and Cry-Baby (1990).

I was just a kid when I accidentally discovered John Waters, in a book about midnight movies; at the time, I was obsessed with Night of the Living Dead, another cult classic, and read any book which even mentioned that movie; after reading and re-reading the chapter on Night, I began exploring the rest of the book, which contained chapters on films such as El Topo, Eraserhead, The Rocky Horror Picture Show, and of course, Pink Flamingos, opening my eyes to a film world I never knew existed.

Who is this man? I wondered. Part of me was deeply alarmed. But the other part of me was fascinated. Like most suburban kids of the 80s and 90s, I bided my time until I was able to seek these movies out.

Serial Mom is one of John Waters’ best films. Waters himself said last night that it is his best-made, “because we actually had enough money.” Even though his early, guerilla films possess a certain magical lunacy that can never be reproduced, the fact that Serial Mom had an actual budget, and the fact that it came later in Waters’ career, after he had learned so much more about not only the craft of filmmaking but the business of filmmaking, means we are seeing an artistic mind at its peak. All of the transgression is here, but merged with an eye for detail that finally has the means to reach its fullest expression.

We see Waters’ artful eye in the construction of the first murder scene, when Beverly Sutphin runs over her son’s high school math teacher (after a conference in which he criticized her son’s obsession with horror movies and suggested she was a bad mother). This scene has a demented rhythm all its own as the camera cuts between Turner’s maniacal rage, the spinning wheels of her blue station wagon (a hilarious concept for a murder car), and the terrified expression on the teacher’s face right before he’s squashed to death like a cabbage that’s fallen off a produce truck. His chewing gum falls out of his mouth as Mrs. Sutphin skids away, a visual gag that reinforces her character's bizarre sense of moral outrage: She hates chewing gum. Earlier in the movie, she asks a detective to remove his gum before entering her home; it’s an offense (like not brushing your teeth or wearing your seatbelt) that will get you killed in Serial Mom.

Indeed, Beverly is dictated by her own feverish, psychotic sense of morality. When people break her code, she exacts severe punishment, and the more Beverly plays executioner, the more she likes the power it gives her. Is she insane, or simply more consistent than the rest of us? Beverly’s son Chip, played by Matthew Lillard, works at a video store (the real-life Video America, a now-defunct store in Baltimore), which gives him easy access to trashy horror movies. But Beverly doesn’t find his obsession with gore flicks the least bit troubling. It’s the self-righteous assholes, like the stodgy customer who refuses to rewind videotapes, that piss Beverly off. And Beverly isn’t someone to wait around for the slow-burn effects of the justice system, or Karma. Beverly beats the video store customer to death with a leg of lamb while she’s watching the musical Annie. (“That [Annie] cost us $40,000 dollars,” Waters observes; “It was worth it.”) In a John Waters movie, capital punishment is reserved for people with bad taste in movies.

What makes Serial Mom so great is two things: its wickedly sharp depiction of suburban American culture (and how suburban people really are insane, only their madness disguises itself as banality), and its ingenuous attack on suburban American morality. The morals of suburban America enshrine blandness, safety, and cleanliness above all things; any thought or desire which transgresses against these values is deemed a dangerous, infesting disease; and enjoying even the slightest bad behavior (like Beverly getting a kick out of making obscene phone calls to her prudish yet Tourette's-inflicted neighbor Mink Stole), can lead to greater and greater crimes.

Today, Serial Mom is more relevant than ever, in this age of fake news and Trump’s politics of chaos. (The caption at the beginning of the movie assures us that the events of the film are completely true; Waters laughs to himself, saying, “People actually believe this.”) In the big courtroom scene at the end of Serial Mom, Beverly defends herself against accusations of murder. Beverly fools the judge and the jury, even the media, although her family knows, deep down, that she’s completely bonkers. When the not-guilty verdict is announced, Beverly beams across the courtroom at her husband, played by Sam Waterston, whose face is a such a perfect blend of relief and horror that the audience erupts in giddy laughter.

By the end of the night, my face hurt from laughing, and I felt a remarkable sense of relief. I think everyone in the theater did. Serial Mom is the kind of movie we desperately need more than ever, because it gives us permission to laugh at (and criticize) the ridiculousness of our own world. John Waters, and his movies, have always provided a visceral liberation from the constraints of reality. I suspect they always will.
by Jacob Lusk @ pannedreview No comments:
Email ThisBlogThis!Share to TwitterShare to FacebookShare to Pinterest
Tags 2017, John Waters, Kathleen Turner, Pink Flamingos, Ricki Lake, Sleeping Giant Fest, Sun-Ray Cinema
Newer Posts Older Posts Home
Subscribe to: Posts (Atom)