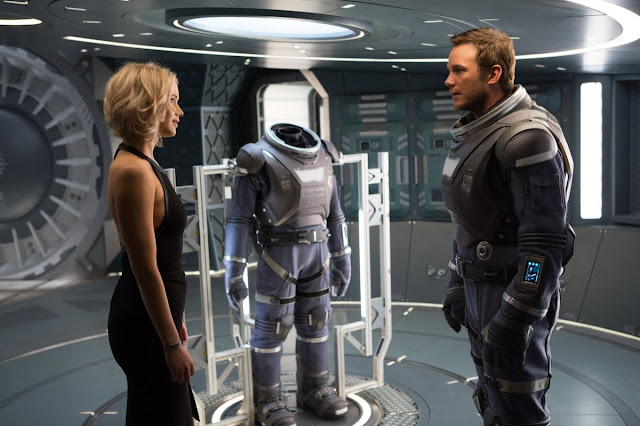 If you could start your life over on a new planet, even if it meant going into hibernation and sleeping through 120 years to do so, would you? That’s the premise of Passengers, a new science fiction thriller which borrows from classics of the genre but reduces everything to the basics: a big, expensive ship, some pretty advanced robots, two humans in love, and a race against time. But instead of fighting aliens or evil corporations, they’re fighting technology, and not a malicious technology, but a malfunctioning technology. In reducing the science fiction drama to such a simply structured story, Passengers does what few of its ilk remember to do: it breathes. This is a movie that allows us to soak in the peculiar, mind-bending grandeur of being alone in outer space. But the film has a much bigger problem: its creepy Sleeping-Beauty ethics. (More on that later.)

That sense of the vastness of space permeates the great sci-fi movies, like 2001: A Space Odyssey and Solaris and Alien: the power of these films lies in their ability to make us feel like we’re there, partaking in the trippy mysteries of the cosmos. So often, contemporary movies are afraid to invoke such feelings of awe and mystery. Instead, they hurl shiny, fast-moving images at us like we’re infants, easily entertained and just as easily bored, always subduable under the tyranny of the next, shinier, newer object. But Passengers has the patience to linger, and so we spend a lot of time alone with Jim Preston, the mechanic-hero played by Chris Pratt, and the first of the passengers to be wrested from hibernation.

Jim comes off as a loner, someone predestined to leave Earth behind and spend the rest of his life alone on a spacecraft. He’s supposed to be the kind of guy nobody will miss, but of course, the movie must then convince us that he’s utterly missable, especially to Aurora, the fellow passenger (played by Jennifer Lawrence) who, while asleep, catches his eye (in a none-too-subtle reference to the “Sleeping Beauty” tale). When Jim watches her video interview, which he unearths through the passenger log, he's smitten. (Loneliness is a factor, but then again, she is being played by Jennifer Lawrence.)

We see Aurora, a writer, explain her reason for leaving everything behind for a new, unknown planet being colonized by earthlings. She will travel 120 years, observe and write about this exciting new colony, and then return to earth in another century, having aged nary a year. It’s the story no other journalist will have, assuming journalism still exists in 250 years. (I’d be afraid that the world as we know it will have completely died out by then.)

This greatest-scoop-ever is a clever gimmick to tempt a smart young woman into an otherwise ridiculous scenario. And these characters aren’t particularly well-developed. Aurora utters writerly pap such as, “I think we tell each other stories to know we’re not alone.” And Jim, when he realizes his predicament, telegraphs it for us: “I woke up too soon!” It sounds almost like the smarmy little kid in Home Alone who declares, “I made my family disappear,” only minus the smirking.

Much like Jack Nicholson's character holed up in that big spooky hotel in The Shining, Jim cannot handle the isolation. (He's alone for over a year, and grows out his beard so that he resembles Kurt Russell in The Thing). The movie smartly revels in the knave-like scumminess of Jim's decision to wake Aurora, condemning her to his own fate and stealing her life, just so he won't be alone anymore. But then the movie goes out of its way to defend Jim, to endorse his love for her as somehow truer than the horribleness of this betrayal, and moreover, it tries to convince Aurora that she ought to surrender to love. Sleeping Beauty, rescued by this modern-day prince, ought to be grateful. She's awake, after all.

Passengers would have been a terrific movie if not for this troubling development. Perhaps director Morten Tyldum fancies himself a romantic, although the scenario he and screenwriter Jon Spaights provide us is more on the level of Overboard, that 1987 romantic comedy where Kurt Russell convinces the amnesia-afflicted Goldie Hawn that she’s his wife and the mother of his unruly brood of boys, all for revenge. (I do love Overboard, but it's a problematic movie.) Ah, the timeless theme of men ruining the lives of women for their own gain; and the women, they may put up a good fight at first, but these movies always wear them down in the end. Surrender is inevitable.

So, if you turn off your ethics, Passengers is an entertaining secondhand science fiction movie, bolstered by the presence of two of our most appealing young stars. And it’s effective and well-made, too. That’s the shame of it, that a movie can get so much right technically but proffer such disturbing views of the world.

With Laurence Fishburne, giving the film some class as one of the briefly revived crew members, and Michael Sheen, giving the film some levity as the charming bartender-robot.
by Jacob Lusk @ pannedreview
Email ThisBlogThis!Share to TwitterShare to FacebookShare to Pinterest
Tags 2016, Andy Garcia, Chris Pratt, Jennifer Lawrence, Laurence Fishburne, Michael Sheen, Morten Tyldum