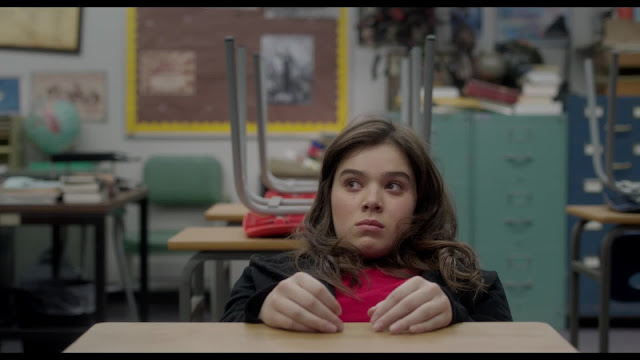 Movies like The Breakfast Club resonate with us when we’re young because they validate our emotions without even a hint of criticism or irony. But when we look back on these films as adults, we may find they no longer speak to us in the same way: the problems that seemed large and insurmountable at 16—distant or demanding parents, alienation from peers, confusion about our identities—may have faded into the background of our lives (or maybe not); and while those problems mattered and do matter, their teeth aren’t as sharp as they used to be, or we’ve grown tougher and more resilient, and gained some valuable perspective, with age. The Edge of Seventeen, a new comedy-drama about teen angst, written and directed by Kelly Fremon Craig, succeeds marvelously at sympathizing with its main character, the unhappy high school girl Nadine (played by Hailee Steinfeld), without pandering to young people. It’s clear from the beginning that while Nadine’s problems are real and difficult, she isn’t the center of the universe, and, by extension, nor are the young viewers who might find in The Edge of Seventeen their own version of The Breakfast Club. Part of Nadine’s emotional journey, in fact, is recognizing that it’s not all about her.

The heart of the story involves the giant rift between Nadine and her best friend, Krista (Haley Lu Richardson), who unexpectedly falls in love with Nadine’s charming, seemingly perfect older brother Darian (Blake Jenner). Nadine only has one friend, and all the important high school gods—of good looks, of popularity, of Straight A’s, of athletics—have smiled on Darian, and half-heartedly smirked in Nadine’s direction. She’s got her personality—which is funny and intelligent when she’s not terribly self-conscious, which is almost never—and her humor, which tends to irritate rather than amuse. Nadine is also dealing with the unexpected death of her dad, and the subsequently strained relationship with her mom (Kyra Sedgwick), who relies too much on Darian now that her husband is gone.

Steinfeld, whom readers probably remember as the fiery, determined young heroine of the Coen Brothers’ True Grit (2010), gives a funny, big, yet controlled performance. Nadine is by turns irritating, gauche, impulsive, and ultimately, lovable. She also cannot control the things that come tumbling out of her mouth. In multiple scenes, Nadine chides herself for her awkward behavior, and screams at herself, “Why do you say these things?” Those of us who, like Nadine, weren’t coasting on our good looks in high school (although Hailee Steinfeld is certainly a lovely young woman), can probably relate to this. We had to work at developing our personalities, and anytime we spoke, it was like we were taking our driving tests without any practice. The art of saying the right thing at the right time takes a lot of work for most of us, and before we perfect it, we’re all falling flat on our faces most of the time. (Now of course, these moments of verbal awkwardness are seared into the permanent record of social media and Youtube.)

Woody Harrelson gives another of the film’s standout performances, playing Nadine’s history teacher Mr. Bruner. During lunchtime, Nadine frequently sits in his classroom and dumps all her problems on him while he tries to savor his 30 minutes of peace. The teacher obviously cares about Nadine, but he often responds to her woe-is-me attitude with smart-ass quips. When she shows him an explicit text message she accidentally sent a boy on whom she has a crush, Bruner reads it aloud and then chides her for using run-on sentences. Their relationship is a prickly one, a kind of love-hate tennis match, and one more unexpected delight in a movie that repeatedly goes against the conventions of teen movies.

Sometimes, I think about what Ally Sheedy says in The Breakfast Club: “When you grow up, your heart dies,” and I feel that John Hughes cashed in on a huge lie: that life peaks during adolescence, and that the big emotions we experience in high school have to define us. Our hearts don’t die just because we become more able to deal with problems, and the things we said and did and experienced in high school do not have to define us. Kelly Fremon Craig understands this, and, perhaps that is why she doesn’t reduce the teenagers and parents in her film to good guys and bad guys; nor does she reduce young people to stereotypes. And while I still love all those 80s teen comedies because they’re my nostalgia, I’m not sure I would have loved them if I’d seen them as an adult when they first premiered. The Edge of Seventeen is sharp enough and honest enough to appeal to both a teenager and a grown-up, and while it may mean something different to the 17-year-old girl who falls in love with it and the 37-year-old woman she becomes, I think it will always ring true.