Can we stop telling stories about Howard Hughes now? 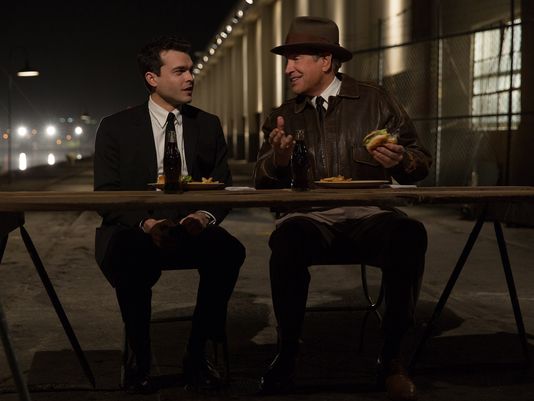 What is so fascinating about Howard Hughes that he deserves so many movies about his life? On the surface, Hughes did lead an interesting life. He was a zillionaire, a movie mogul, a daredevil in an airplane, a real ladies’ man (he was an epically bad boyfriend to many a Hollywood star) and a complete eccentric: all the ingredients required for a typical American “character”, and we sure do love “characters”. But every time someone makes another movie about Howard Hughes, the result is insufferably dull and uninspired (Scorsese’s The Aviator). And now Warren Beatty has ventured into Hughes territory with Rules Don’t Apply, which Beatty wrote, directed and stars in, as the aging eccentric himself. The film takes place mostly in 1959, with Hughes in his prolonged mental illness phase, except that he was still trying to achieve new levels of greatness as a filmmaker and an aviator and a tycoon.

Howard Hughes, like all the other memorable characters to come out of Hollywood’s golden era, is the closest thing to royalty we have: an heir to oil like a British monarch is an heir to royal blood. But there’s no lack of obtuse valentines to old rich white men in this country, and Rules Don’t Apply doesn’t break any new ground in its quest to understand, or mock, or merely exhibit, Hughes’s eccentric life. Warren Beatty, who did excellent work in films like Shampoo (1975), made a common mistake of many an actor-turned-director (starting with Reds in 1981): he turned to “important” material (in the case of Reds, the Russian Revolution) as a way to elevate his filmmaking, forgetting that much of the best American filmmaking of the 1970s eschewed the effrontery of prestige. Rules Don’t Apply makes a similar error, refusing to contain its man-obsession with Howard Hughes, who was essentially a real-life Jay Gatsby, the kind of man we’ve been trained to idolize: self-made and rich and eccentric, yet not really self-made, because in Jay Gatsby’s case, he resorted to organized crime to earn his millions, and in Hughes’s case, he inherited his first big swath of cash (just like our new President).

As a film, Rules Don’t Apply is beautifully made, and every costume, every prop, every wall, seems to have been designed with care and precision. But it's also frustratingly uneven. Hughes was known for being stubborn, unpredictable, and erratic. The movie’s tone and rhythm somehow internalize these Hughesian qualities, and as a result, we never feel confident or secure in the narrative that Beatty is trying to tell. Movies should be unpredictable, but they shouldn’t feel so shaky that we question the very competency of the storytelling, as though the movie itself is Howard Hughes, and we’re Frank, the dutiful assistant played by Alden Ehrenreich, who incidentally gives the film’s best performance. Ehrenreich has star appeal: a pleading look in his eyes and a sense of daring-do beneath that handsome face, like he could easily turn into a rascal or a hood if called upon. (He’s been cast to play a young Han Solo in some new Star Wars offshoot.)

The plot involves Hughes’s coterie of starlets, impressionable would-be actresses he’s set up in Hollywood bungalows with a salary of $400 a week and a driver at their beck and call, not to mention vague promises of a screen test. The main starlet in question is named Marla Mabrey (played by Lily Collins), a stuffy fundamentalist girl from Virginia, who doesn’t drink. Collins gives an earnest performance, but she never satisfies in this movie about stars, because Marla isn’t really star material. Indeed, Marla displays refreshing honesty about her prospects as a movie star. At one point she says something to the effect of: “I can’t sing that well, I don’t have big bosoms, and I think too much. I know how this business works, and that’s not what they’re looking for.” At least she’s self-aware, and the choices Marla makes leave her with her dignity mostly intact. And, star or no star, Marla does catch the eye of Frank, her driver, but their budding romance is complicated by Hughes’s draconian rules: his girls aren’t supposed to engage in any extracurricular activities with Hughes’s employees. (Their love story is, finally, the most compelling thing about Rules Don't Apply; it's the thing that keeps us watching.)

As Hughes, Beatty gives an impressive performance, but even that is marred by the film’s tonal incongruities. We never know if Beatty’s adoration for Hughes is totally sincere, or tongue-in-cheek. He’s certainly nowhere near the dark, critically poetic level of Orson Welles, depicting the empty, selfish life of William Randolph Hearst in Citizen Kane. And after multiple scenes where the camera closes in on a dimly lit shot of Hughes crying about his daddy, viewers may decide they’ve had enough of Hughes, even if the relics of Hollywood haven’t.