Happily in the Dark: Reviews of Two Horror Movies, and Some Notes on the Genre 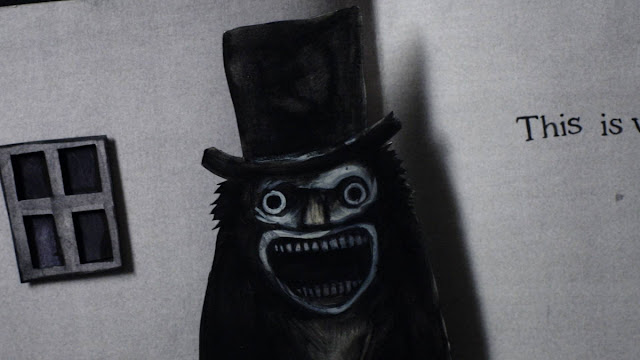 During the extended hurricane weekend, I found myself watching two horror movies with family and friends, one of them old — 1954’s The Creature from the Black Lagoon — and one of them relatively new—2015’s The Babadook. I’d seen Creature many times (it was a childhood favorite), but had been avoiding The Babadook because, despite its critical acclaim, the film seemed like a dreadful experience waiting to happen. That fear of dread sums up my current apathy for the horror genre, a genre in which I took great pleasure as a child, and which in many ways formed the foundation for my love of movies. It’s also the reason I feel particularly excited when a really fine offering emerges, such as this year’s The Wailing, or 2015’s The Visit (by far the most entertaining M. Night Shyamalan film).

It’s virtually impossible to nail down the reason that some horror movies are delightful and others are hard to watch. (Aside from the horror movies—and there are plenty of them—that are just terribly made, and thus unwatchable except as fodder for ridicule.) The moment we apply some set of conventions, a movie comes along that breaks them and flaunts our silly rules. Not to mention the fact that sometimes we soften toward movies we didn’t like before. (I’ve gradually grown to appreciate and even enjoy the first two Texas Chainsaw Massacre movies, both of which I initially hated.) In the end, horror movies, like all movies, must possess that living, vital, heartbeat that makes some movies magical rather than mechanical. But even this rule doesn’t always stand up, because one could certainly argue that a movie like Creature from the Black Lagoon is mechanical: it has the makings of a studio assembly line product, from a director who made a number of other B sci-fi pictures, Jack Arnold. 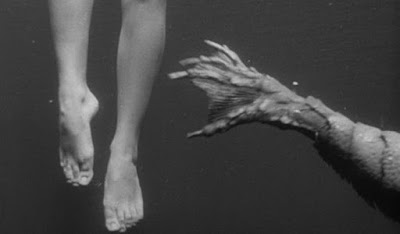 As hokey as Creature from the Black Lagoon is, the film still works. The setup is the ideal one for any horror film: a small group of people cut off from the rest of civilization, pursued by some kind of monster, in this case, The Gill-Man (who looks like a rubber man with collard greens glued all over his body), one of the transitional life forms during the process of human evolution. Creature begins with a banal, self-righteous narrator preaching to us about God and the first explosion of life as it transformed from oozy single celled organisms to more complex creatures, then sets us in the Amazon, where this Gill-Man attacks some unsuspecting natives who’ve been working for an American research team. Not long after, we cut to the next expedition, which includes several scientists, among them the beautiful Julia Adams, who becomes bait for the monster.

Everything about Creature from the Black Lagoon is preserved in a 1950s brine: the cheesy dialogue and the bad soap-opera love triangle between Adams and her two colleagues, Richard Carlson and Richard Denning, the long speeches about the importance of science, the half-hearted repression of sexual innuendo (like when Adams, in her skin-tight one-piece bathing suit, does breast strokes in the lagoon and the Gill-Man swims right under her, simulating a sexual encounter). 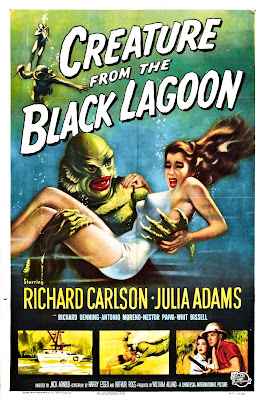 But despite Creature’s corny elements, it’s still a fun movie to watch, especially in a large group. And what’s more, the Gill-Man emerges as a tragic figure: He’s taunted by the scientists who see him as nothing more than an opportunity to make their own careers shinier; their complete disregard for the world around them, which they see as theirs for the taking, becomes a fitting commentary on U.S. politics during the age of the bomb and the space race: Achievement trumps environment.

In Jennifer Kent’s The Babadook, a single mother named Amelia (Essie Davis) begins to suspect that a creepy character from a children’s book, called Mister Babadook, has possessed her seven-year-old son Samuel (Noah Wiseman). The idea of a character from some sinister children’s story coming to life is enticing enough, and when we see Amelia flipping through this particular book, which appears in their house out of nowhere, it’s quite an effect: Mr. Babadook has the long arms of Count Orlok in F. W. Murnau’s Nosferatu and the pale, ghastly face of Cesare from Wiene’s The Cabinet of Dr. Caligari. Also, it's a pop-up book, so freakish houses and creatures and eerie threats emerge from inside the pages, like secret warnings. The book troubles Amelia, but at first, as in every horror movie set-up, she thinks little of it. Then Sam begins acting out, making weapons to fight the Babadook (and taking one to school, which gets him in hot water with the administration).

As the movie progresses, we wonder if Kent hasn’t placed us in a Turn of the Screw-like situation: Has Mom just gone completely bonkers, perhaps a grief-induced madness? (Sam’s dad died on the day he was born, and this tragedy haunts them both.) The Babadook, whatever it is, has either gotten loose and started playing with reality, or both mother and son are turning into variations of Jack Nicholson’s character from The Shining. Watching all this unfold is less than enjoyable.

As a director, Jennifer Kent does impressive work in The Babadook, her first feature. She values subtle creepy things, she values the accumulation of subtle creepy things, and she cares deeply about Essie and Sam. (So many directors seem to hate their characters.) We feel great sadness for the plight of Amelia and her son: not just the horrific series of events chronicled in the movie, but the grief they’ve been living with for seven years. Sam’s bratty cousin taunts him at her birthday party: “Your dad left because of you!” and Sam screams the truth at her, but cannot contain the anger and the fear her words engender. He bloodies her nose, and becomes the "bad kid" at her birthday party.

As well-made as it is, The Babadook cannot recover from its essentially grim, unpleasant tone. We feel weighed down by the horribleness of the story, particularly because Kent humanizes the mom and the boy so effectively. Surely this is the whole point of the movie (Kent herself said she was addressing grief, and the fact that people tend to bury their grief rather than work through it); and apparently enough people were drawn into the film, as it received high praise from critics after premiering at Sundance, and has since become a sleeper hit.

But this general unpleasantness—the same unpleasantness I remember feeling in other recent horror movies like Don’t Breathe and Green Room and It Follows and The Conjuring—ruins the movie for me. At the screenings of Don’t Breathe and Green Room, I remember feeling a desire to simply get up and leave the theater. But aren’t we supposed to experience dread in horror movies? Yes, but somehow, some horror movies get dread right, or perhaps they get the right level of dread mixed with a number of other varying ingredients like humor, satire, irony, and of course, all the various artistic qualities that make a movie more interesting. The Babadook is a grey and murky movie, except for the scene in which Essie looks through the book, and the film becomes something starkly, surreally beautiful, like a scene out of Night of the Hunter.

[spoilers for The Babadook below]


And, perhaps, The Babadook fails because we know pretty well what’s happening. We’ve seen it all before, and nothing in The Babadook comes as a surprise. Contrast that to The Wailing, a movie that unspools multiple mysteries simultaneously, while constantly switching our allegiance to its opposing characters, and which, in the final act, resolves certain plot elements without giving everything away. In its defense, The Babadook wisely chooses not to explain the monster, instead turning Essie and Sam into its caretakers: They must feed the thing worms while it lurks in the cellar, engaged in a prickly neutrality. Horror movies deal in the terrifying mysteries of life, like a shaky old gypsy at her tarot cards, and the most effective ones do not explicate those mysteries too much. They lead us deep enough into the cave to lose us, and then they leave us happily in the dark.
by Jacob Lusk @ pannedreview
Email ThisBlogThis!Share to TwitterShare to FacebookShare to Pinterest
Tags 1954, 2015, Essie Davis, Jack Arnold, Jennifer Kent, Julia Adams, Noah Wiseman, Richard Carlson, Richard Denning