At this point, fans of the 'The Walking Dead' should be asking to be put out of their misery. 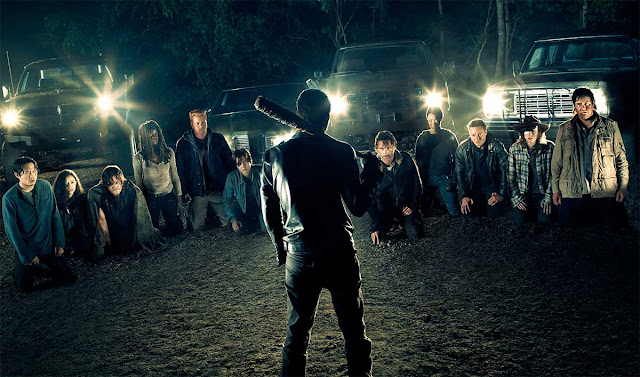 Promotion of the season premiere of The Walking Dead reached new lows this month, with ads promising that one of the show’s most beloved characters would be killed, and interviews with actors and writers from the series, grimly warning its loyal fans that this episode would be painful, that the death of at least one major unidentified character would “propel the series in a new direction,” according to make-up expert Greg Nicotero, one of the show’s executive producers and occasional directors. AMC obviously needs to keep the fan base whipped up into a frenzy so that ratings will increase (or at least, stop decreasing), especially given that the show’s considerable viewership finally plateaued during the fifth season. But this kind of cheap manipulation riles me, and leaves me wondering why any fans would put up with being treated with such contempt.

But then again, the numbers have dwindled, so maybe people are beginning to vote with their remotes. During the 2014-15 season, approximately 14.4 million people watched the series on average; that figure shed a million viewers during 2015-16; perhaps nothing to be alarmed about, but then again, AMC has been commanding big ratings for some time now. But their efforts to sustain those numbers have been largely reprehensible if you care about art. The final episode of Season 6 ended with a by now typical cliffhanger, in which a villain named Negan (Jeffrey Dean Morgan) threatens to kill one of the gang. (He even uses such big-boy tactics as reciting the "eeny meeny miny moe" rhyme. Quelle surprise!) That was six months ago: fans have been waiting all this time to discover the truth, and the trumped up ad campaign over the last few weeks has only whetted their appetites, with BS teasers and heaps of speculation. The fans got their answer last night, even though the episode dragged on pointlessly for nearly half the running time before finally revealing the deaths of not one, but two, major characters. (I’ll withhold their identities for those who haven't watched yet.)

Killing off beloved characters is kind of the latest American pastime, except it’s a tradition that’s been around much, much longer. (Shakespeare, anyone?) And experiencing an emotional reaction to a character’s death in a TV series or a book or a movie is usually a sign that the text has connected with us in a big way, that it’s certainly become more real to us than say, the actual deaths we hear about on the news every day. I won’t fault any show or book or movie for doing that. But I will fault ad campaigns that salivate over the sadistic protractedness of this “ordeal.” The Walking Dead’s devoted viewers deserve a little better than that. What’s more, they deserve a better television show. (Or do they?)

In the first two seasons particularly, The Walking Dead offered surprises, exciting plot developments, and satisfying growth in characters. We fell in love with the hot-headed bow-wielding redneck Daryl, we rooted for the transformation of abused housewife Carol into a bold warrior, and we tolerated the sometimes ridiculous love triangle between Rick, his wife Lori, and his best friend Shane, which fueled much of the show’s drama. (I never thought I’d be tuning in to a show about a zombie epidemic to find out who the father of Lori’s baby was.)

But The Walking Dead meanders on, well after its characters and its stories have worn out their welcome. What’s left is a talky show, steeped in grimness and unflinchingly self-indulgent. We keep hearing that the writers want to go for at least ten seasons: that means three to four more years of their contemptible audience-bating. God help us. And there’s no turning back from the show’s dopey, repetitive tone: It’s either as serious as the plague or as noxiously saccharine as The Brady Bunch (like when Rick remembers the group gathered around a large table for a feast, all of them smiling in the bright, clean, happy sunlight).

In the season opener, Rick keeps imagining different characters (all of them parade through his mind like the in memorium segment of the Oscars), as though he’s going through the same tortured experience as the viewers: “which one will it be? I love them all so much.” That is not good story-telling. When a show has exhausted the same old narratives, when it’s become utterly humorless, when the writers have even forgotten the best part—the zombies—it’s time to end things. But The Walking Dead has the luxury of good ratings, even if they’ve fallen a little, and sometimes (most times), good ratings trump bad art.
by Jacob Lusk @ pannedreview
Email ThisBlogThis!Share to TwitterShare to FacebookShare to Pinterest
Tags Andrew Lincoln, Jeffrey Dean Morgan, The Walking Dead