'American Honey' is an exuberant, happily aimless story of a lost youth finding herself. 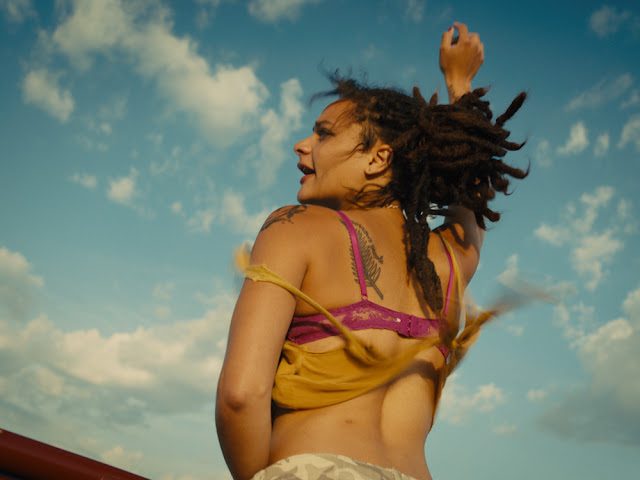 American Honey, from British writer-director Andrea Arnold, vividly captures the lives of America’s invisible lower-class. And like 2015’s Tangerine (the movie about trans prostitutes in L.A.), it does so with verve and gusto. This is a full-blooded, hearty slice of life, about a girl named Star, just eighteen, who joins a nomadic group of fellow young people who sell magazines for a living. Star is played by newcomer Sasha Lane, and her face burns into your mind and lingers there long after the movie has ended. American Honey has texture and a menagerie of often fascinating characters, but Lane gives the film a heart and a soul, and when the film meanders—it’s a road trip movie with no final destination—we’re still drawn to Star’s story, and we’re waiting to see how she will make out in the end.

When the movie opens, somewhere in the midwest, Star is dumpster-diving with two young children, presumably relatives, although it’s never completely clear. She locates a discarded whole chicken, among other things; once back home, the little boy struggles to rip open its plastic container with a stick. They live in squalor, with a sleazy guy who’s drunk when Star and the kids come home from their work. Star makes him dinner, he gropes her while his favorite music drowns out her despair, and she makes a decision: She will leave this zero, after dumping the kids off with their actual mom. (Why Star was looking after them isn’t apparently important, except that it establishes Star as a caretaker, a person who, even at age eighteen, has a sense of moral responsibility.)

Star’s new job selling magazines introduces her to a variety of odd, crazy, lost youths just like her, all of them bound by a similar yearning for community, as well as a desire to see the world. Traveling with ten or more bodies packed into an oversized van isn’t exactly luxurious—nor is peddling magazine subscriptions to snooty rich people or grubby truckers or even people in reduced circumstances like their own—but it affords them the opportunity they never had: the chance to travel.

This group is a world unto itself, complete with a power-hungry leader, Krystal (Riley Keough), a girl who only likes her staff when they’re making money for her (she collects 70% of their earnings, although some of that covers motel fees and transportation). Krystal runs this little organization like an army, and she’s the general. She even stages fights between the two lowest-scoring employees of the week. She also has a penchant for taking lovers (despite rules against romance within the group); so when Star catches the eye of her boyfriend Jake (Shia LaBeouf), jealousy festers in Krystal’s thoughts. (This is a girl who at one point in the movie is sporting an ill-fitting confederate flag bikini.)

Andrea Arnold’s sense of America is apt, perhaps because American Honey doesn’t claim to be some kind of definitive statement about America. Instead, this is a film that tells a particular story of youth. And we aren't made to pity these kids; in fact, their lives often seem far more interesting than the boring existence of wealthy suburban kids. (Don't get me wrong: they encounter horrible experiences as well, like sexual abuse.) When people degrade the poor as being money-grubbers, they’re really scorning the same quality they dislike about themselves. These seemingly aimless youths dream of having money (although they’ve never had any to begin with, and have no prospects of making in the future), but when they drive through a wealthy neighborhood in Kansas City, their reaction amounts to shock, like a tribe of natives seeing their first Europeans: they feel displaced by the lavish wealth, and sure, jeaous, but ultimately not that impressed. Jake later says, “I want my own place, but nothing large: just a small house on my own.” (I’m paraphrasing.) Star doesn’t dream of a big house either, just her own trailer, and “lots of kids.” When the group stops in a particularly depressing town somewhere out west, Star happens across two children whose mom is clearly doped up on something. She brings them groceries. She’s eighteen and she has no reason to be selfless, except every reason: Star has been dealt a particularly empty hand in one sense, and yet, she is a fully living person, and every bit herself. American Honey is about a girl embracing her womanhood, and the powers that come with it: the power to love on her own terms, the power to say Yes and to say No, the power to find her own way.

If that sounds like a lot of cant, don’t be fooled: American Honey is a movie of grime and grit and sweat and blood and people living on the margins of life, people who are by no means "together". (But then again, how "together" are rich people?) When I saw Tangerine last year, I kept thinking about how uncomfortable those girls were walking in the hot streets of Los Angeles in the summer heat. This movie gives off the same sense of palpable humanity. Its earthiness is its chief charm.

As for Shia LaBeouf, his performance is good enough to forgive some of the ridiculous behavior he’s exhibited in real life over the years. Jake is jealous and daring and crazy and cocksure. He's also manipulative, yet we sense that his passion for Star is turning into love. But he's also patronizing and hot-headed, and Star wants to prove herself to him. In one scene, she ditches him for a trio of older Texas longhorns driving in a convertible. They take Star back to their house (the whole time we’re waiting for something terrible to happen to her), and Star swallows the worm from a tequila bottle in exchange for 400 dollars cash. Then Jake catches up, brandishing a gun and forcing the men into the swimming pool. Jake and Star take off in the car, and it’s in this moment that we feel these two could morph into a modern-day Bonnie and Clyde.

American Honey doesn’t go in that direction though. I think I know why: to turn these characters into savage criminals would be confirming the often baseless assumptions people make about poor youths in the first place. Instead, Andrea Arnold explores the idea that these kids, all of them rejected by society and rejecting it right back (with a boisterous middle finger) might just possibly be human beings capable of loyalty and kindness and their own code of morality—along with plenty of human flaws like jealousy, addiction, and arrogance.

With McCaul Lombardi is Corey, a Baltimore kid who likes to flash his junk whenever possible (which then prompts the other guys to chase him and wrestle him to the ground), Arielle Holmes, Crystal B. Ice, Chad McKenzie, Garry Howell, Kenneth Kory Tucker, and Raymond Coalson. Written by the director.
by Jacob Lusk @ pannedreview
Email ThisBlogThis!Share to TwitterShare to FacebookShare to Pinterest
Tags 2016, Andrea Arnold, McCaul Lombardi, Sasha Lane, Shia LaBeouf