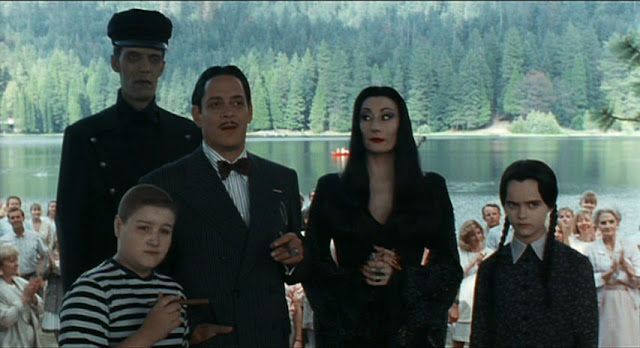 The 90s seemed to be obsessed with turning bad and sometimes beloved American sitcoms into bad movies. But there was one adaptation that stood out from the rest: Addams Family Values, the 1993 sequel to The Addams Family (which is pretty good too). The casual, cheeky gothic tenor of the show isn’t lost on director Barry Sonnenfeld, who brings out the best in his cast. Addams Family Values is, I think, cherished in the memories of kids who grew up in the 90s, and for good reason. 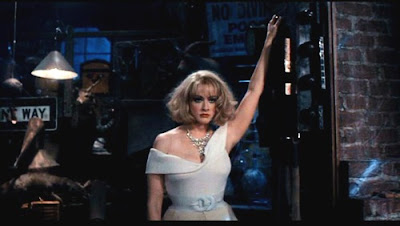 Where do I start? With Joan Cusack. Cusack was no stranger to comedy. She’d turned in small performances in John Hughes movies like Sixteen Candles, supporting roles as the bestie to Melanie Griffith and Michelle Pfeiffer respectively, in Working Girl and Married to the Mob (both 1988), and played the killjoy love interest in the Steve Martin-Rick Moranis mob comedy My Blue Heaven (1990). Addams Family Values gave Cusack a chance to carry a larger role and play a femme fatale: the deliciously psychotic man-leech Debbie Jellinsky, who marries Uncle Fester (Christopher Lloyd) for his money. She ingratiates herself into the Addams household by posing as a nanny (she’s actually a serial spouse-slayer), and when the older kids figure out her scheme, she sends them off to a chipper summer camp to keep them from blabbing. Cusack has a big personality, and she's a woman who seems totally embodied: you don't fail to notice a Joan Cusack appearance. Those soft eyes can bat at you and steal your heart, and then a moment later elicit a glare of comic rage that's both funny and terrifying. And that blonde hair, so strikingly different from Cusack's usual red-brown, provides the maniacal finishing touch. Cusack practically steals the show. 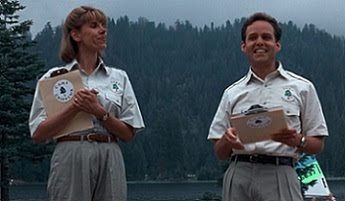 And then there’s Christine Baranski, Broadway star (and sitcom BFF to Cybill Shepard on her now forgotten series Cybill), playing one of the blissfully dopey camp counselors trying to inflict her cheerfulness upon poor Wednesday Addams (Christina Ricci) and her brother, Pugsley (Jimmy Workman). When the elder Addams kids are shipped off to Camp Chippewa, they’re immediately subjected to the counselors’ joyish terrorism. Peter McNicol plays Gary Granger, and Baranski plays his wife, Becky Martin-Granger: they favor the bratty mean girl who thinks she’s talented because she’s pretty, and ridicule all the misfit kids (including a hypochondriac Jewish kid named Joel, who becomes Wednesday’s first boyfriend). No comedy ever captured the tyranny of relentlessly cheerful extroverts more aptly. When Wednesday refuses to smile, she’s forced to spend 24 hours in the “Harmony Hut,” which plays The Sound of Music, Annie, and episodes of The Brady Bunch on a loop. 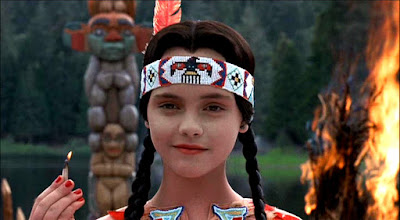 Which brings me to Christina Ricci, who had a prolonged moment in the 90s playing the damaged, dark, cerebral teenage girl in movies like Ghost World. (She was more cynical than Reese Witherspoon and wittier than Thora Birch.) Ricci may have become pigeon-holed as a black-lipsticked goth girl, but she left her mark, and she registers as one of the most important and endearing 90s movie kids. (There were so many annoying ones, taking their cue from those little monsters in The Goonies.) When Wednesday stages the attack on Camp Chippewa—by sabotaging the big Thanksgiving-themed play—it’s the triumph of anarchy over conformism. No hipster could have done it better than Ricci, dressed as Pocahontas, treating the pilgrim-kids to a little reverse imperialism. The scene, which is my favorite in the whole movie, echoes the unashamed violence of a Bugs Bunny short, and channels John Waters' giddy anarchism too. 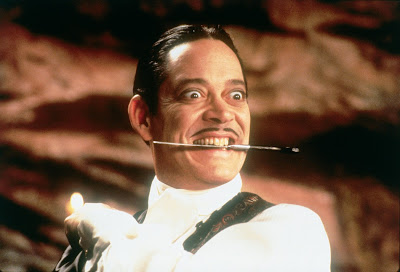 That’s what is so wonderful about Addams Family Values (and about the Addams Family brand in general): its pointed, joyful rejection of the worst elements of mass culture and its love of anarchy. We’re told that movies like The Sound of Music are great entertainment because they’re wholesome, and good for us. But it’s wholesomeness for the sake of money, money milked from the wallets of audiences, and what good is wholesome culture when it denies reality? Let’s remember that The Sound of Music and The Brady Bunch were products of the 1960s, the same decade that brought us such atrocities as Vietnam, the assassinations of JFK and Martin Luther King, Jr., and such urgent, often tragic cultural moments as the civil rights movement. Addams Family Values dares to smile and laugh in the dark, and happily subverts all the fears that so often consume us, that drive us to the lies of The Sound of Music. 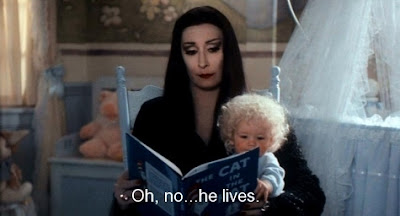 I’ll close with an appreciation for Anjelica Huston and Raul Julia. Huston gives the most understated performance in the film, which makes her wonderful acting easy to overlook. She imbues Morticia Addams with an exuberant sadness that glimmers through her pale white skin and throws her black hair and wardrobe into relief. And Julia, wide-eyed and ever the gentleman, has such life in him that you could never believe his own life was coming to an untimely end.

When Morticia conceives a baby, she and Gomez are delighted, until it morphs into a blond, curly-haired, smiling toddler. Morticia is horrified, as though she’d delivered a werewolf. (Actually, a werewolf would be a welcome improvement.) Gomez weeps in despair even as he tries to comfort his wife. But nothing can comfort you when your perfectly strange baby suddenly turns...normal. Addams Family Values takes delight in a world that is off-kilter and strange, but it's our "normal" world that becomes increasingly suspect in the process.
by Jacob Lusk @ pannedreview
Email ThisBlogThis!Share to TwitterShare to FacebookShare to Pinterest
Tags 1993, Anjelica Huston, Barry Sonnenfeld, Carol Kane, Christina Ricci, Christine Baranski, Christopher Lloyd, Joan Cusack, Peter MacNicol, Raul Julia