The new restoration of 'Multiple Maniacs' offers yet another insane vision from the mind of John Waters. 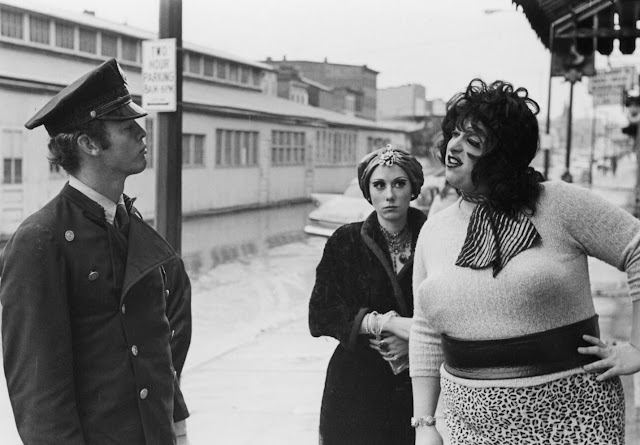 This week, Jacksonville’s Sun-Ray Cinema is screening a restored print of John Waters’ 1970 anti-establishment film Multiple Maniacs. Waters, who’s somehow become a household name, of sorts, despite—or perhaps because of—his eccentricities, is best known to mainstream audiences as the director of Hairspray (1988), Cry-Baby (1990) and Serial Mom (1994) (all of which I’ve reviewed on this blog). Multiple Maniacs is his ode to the Manson family, so-to-speak, a movie that’s tickled with its own transgressiveness. Waters was so fascinated and disturbed by the murders of Sharon Tate and six others (in August 1969) at the hands of the infamous Manson cult, that he attended the trials of guru Charlie (aka Jesus Christ) and his followers, including the three girls who are forever burned in our memories with their shaved heads and the crude crosses engraved on their foreheads: Susan Atkins, Lesley Van Houten, and Patricia Krenwinkel. The film suggests that they've got the wrong people, as Divine later hints that her boyfriend is responsible for the crimes, and even holds up an actual newspaper that reads “Arrest Weirdo in Tate Murders,” just to scare him. (In reality, Waters has become a friend of Lesley Van Houten, who was recently recommended for release by the California Parole Board, only to be turned down by Governor Jerry Brown. You can read about their long correspondence and friendship, and Waters’ convincing argument for why Lesley should be released from prison, in his book Role Models.)

Multiple Maniacs follows The Lady Divine (played by Divine), a woman who dreams of having real success in the performing arts even as she “headlines” off-the-wall free shows featuring “homosexuals, druggies, and freaks.” The M.C. (David Lochary), who's also her (frustrated) boyfriend and manager-of-sorts, stands outside a white tent, shaming passers-by until they break down and enter this traveling carnival of sickos, where they can see horrible things. (You can see the mixture of disgust, fascination, and curiosity in every last one of these ordinary onlookers, even as they snicker and make fun of the freaks on display to them.) Once this troupe of exhibitionist weirdos has accumulated enough audience members, they tie up the terrified crowd with rope and steal their money and jewelry. (Not before concession girls pass out hamburgers for a buck each.)

But even as John Waters venerates bad taste, and exhibits mockery of traditions, he cannot resist reminding us of his considerably wide appreciation of the arts. The makeshift sets (houses of family and friends in Waters' Baltimore hometown) display various movie posters (many of them art house fare from the likes of Ingmar Bergman). John Waters is a man who appreciates the ways that bad taste subverts good taste, even though he's secretly a snob himself. (Well, he's more upfront about it these days, if you pay any attention to his books and interviews.) Waters reads literary fiction voraciously, doesn’t own a television set (or at least, doesn’t watch any TV), and boasts an extensive art collection. You see, John Waters has always maintained a healthy love for the whole spectrum of art and trash, which is why he was born in exactly the right time and place. Multiple Maniacs, a movie that jokingly glamorizes the dregs of society, drags the respectable and the conventional people of the world, kicking and screaming, into its lair and confronts them with what they cannot accept on their own: their own banality, perhaps, or maybe the fact that their form of culture isn’t any more valid than what they consider garbage.

Multiple Maniacs isn’t likely to be everyone’s cup of tea. At 82 minutes, the movie somehow feels too long, because Waters, when he was making his early films, didn’t always know when to cut a scene. The movie has static moments, but it’s a sight to behold all the same. Divine was always a devoted star, even when his performances registered as mostly amateur work. (He got better and better though, and in Multiple Maniacs his Elizabeth Taylor-vamping occasionally turns surreal.)

What’s most exciting about Multiple Maniacs, besides the fact that it was the penultimate step toward Waters’ crowning filth-de-resistance, 1972’s Pink Flamingos, is that this movie provides a window into the insanity of the 1960s. All that sizzling, lunatic rage against society has been captured for those of us who can only experience the 1960s by proxy. If the Manson murders drove a dagger into the heart of the Peace and Love movement, Multiple Maniacs was there to record the fall: John Waters has always been able to tap directly into the bloodstream of the here and now: He knows what’s going on in the world, and he filters it through his own deliriously happy vision. The anger and the humor and the irreverence have lost none of their power. Multiple Maniacs is stabby and proud of it.