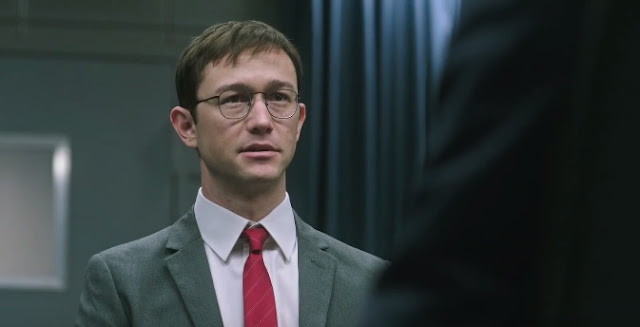 Nothing excites in Snowden, the latest film from Oliver Stone, for whom the Edward Snowden case seems a rather obvious next step in a career spent shedding light on America’s demons—or at least pointing to the darkness in which they skulk like ever-present Boogeymen. Stone’s movies, as we all hopefully know by now, aren’t meant to be treated as historical documents. (For that matter, neither should any other director’s movies, no matter how “based-on-a-true-story” they claim to be.) Rather, the best of Stone’s work (such as his mesmerizing masterpiece JFK), asks us to question the status quo, to remain skeptical of what we’re told by the powers-that-be. That’s where Stone shines as a director, even when his thesis feels practically emblazoned on the screen like a permanent caption, or like the opposite of something you’d see with those dark sunglasses in They Live: QUESTION AUTHORITY.

Joseph Gordon-Levitt tries his damnedest as Edward Snowden, the CIA contractor who in 2013 released classified intel about the NSA’s troubling surveillance practices, and who now resides in Russia, because if he returns to the U.S., he will face charges—of espionage and other crimes—that will likely put him in prison for the rest of his life. But both Snowden the man and Snowden the movie fail to generate any heat as a subject: While the real Snowden remains a significant news story and an important—and controversial—figure in contemporary history, he’s essentially a pasty middle-class computer nerd, and the things he discovered can only be dramatized by distilling often inscrutable computer jargon. Watching someone type things on a word processor, or transfer files from a computer to a chip, just isn’t that exciting, even if in reality human lives across the globe are held in the balance.

When Oliver Stone made JFK, he was in full command of the medium. JFK runs around three hours, yet it speeds along like the best kind of crackling, tingling pot-boiler. Stone used actual footage (including the famous Zapruder film of the actual assassination) and intertwined it with dramatizations, following every kooky conspiracy rabbit trail down into its respective, labyrinthine rabbit hole. What Stone created was a movie equal parts truth and fiction, but brilliantly fused together with Stone’s sharp eye for detail and the best kind of bombastic performances. (Even Kevin Costner seemed alive in JFK.) But where JFK rivets, Snowden languishes.

Like JFK, Snowden implores us to pay closer attention to our government’s actions, but this time Stone is going through the motions. The film would benefit from a more paranoid, eerie sensibility, like those great conspiracy thrillers of the 1970s (e.g. All the President’s Men, a movie in which we constantly feel a sense of impending dread, and in which the subject, an ominous and paranoid President Nixon, is ultimately more interesting than pasty, friendly, Charlie Brown-esque Edward Snowden). There’s only one scene that comes close to this style: When Snowden is speaking to his superior (played by Rhys Ifans) via telecast, and the man’s face is framed by the enormous screen so that Snowden stands like the meek silhouette of a chess pawn in the wake of this sneering, scowling, terrifying countenance, which represents government overreach and duplicity at their worst. It’s worth noting that Joseph Gordon-Levitt speaks at a lower octave than usual, apparently imitating the real-life Snowden, and that this monotone, dulled-out effect on his voice represents a metaphor for the rest of the movie. We’re dulled out too, even if the movie does raise extremely important questions about the nature of surveillance and the ways in which our government monitors other countries, not to mention its rationale for so-doing. If Stone is right, then we’ve ostensibly used the War on Terror to justify our own fascistic agenda, and that is indeed something to worry about. But Oliver Stone has lost momentum: there’s no vitality to this movie. Even the exchanges between Gordon-Levitt and Shailene Woodley, who plays his longtime girlfriend Lindsey, feel uninteresting: They fight essentially about the same thing over and over again: He can’t communicate (because he’s bound to keep silent about his work with the CIA), and what he knows is eating him up. But their skirmishes feel like the stuff of bad soap operas, and Woodley is reduced to playing the nagging, concerned wife, a role that Sissy Spacek had in JFK (although Spacek made it work better than Woodley.)

Stone’s intentions may be admirable, but this kind of juiceless dramatization of real events is inherently un-cinematic, at least when it comes to narrative film. I don’t think anyone else could have done much better. Nixon made for great cinema because of, well, Nixon, not to mention Deep Throat and the aids sneaking through the Watergate hotel, and eerie scenes in dimly lit parking garages, and because there’s something more dramatic and exciting about hard-scrabble journalists sniffing out a story and pounding away at typewriters. Moreover, while Snowden has a clear hero (assuming you take up Stone’s side of the argument, which is the only side you’ll get from this movie), the villain isn’t quite as clearly shaped. It’s the impersonal face of bureaucracy, without a Nixonian head, a King Coopa to destroy once you get to the hellish castle. All of these may be reasons to see instead CitizenFour, the Oscar-winning Snowden documentary that Laura Poitras directed. (Poitras, incidentally, figures into this film too: She’s played by Melissa Leo.)