"Maggie's Plan" insists that you CAN return your annoying husband back to his first wife, for a full refund. 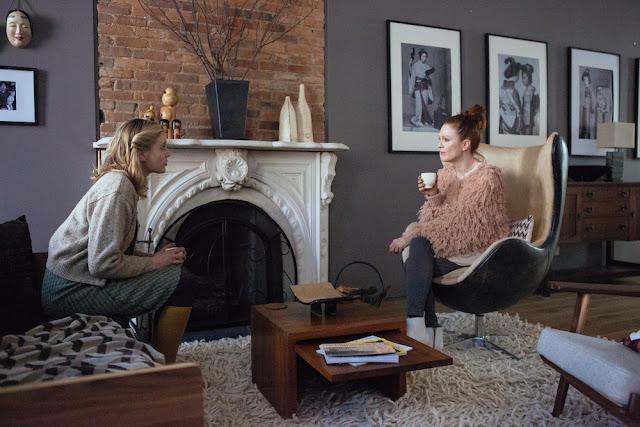 What do you do if you’re in a bad marriage with a man who’s still in love with his ex-wife? Well, if you’re Maggie, you hope and pray that you can give him back for a refund. That’s the “plan” at the heart of the movie Maggie’s Plan, a Parent Trap of a different sort, and a film that happily thwarts the conventions of the romantic comedy. Maggie’s Plan itself is not a romantic comedy proper, but somewhere inside, there is a romantic comedy trying to get out. Instead, it’s a study of a mistress-turned-wife, an ex-wife, and the man they have to share. Each of them is fully equipped with eccentricities and neuroses. And while director Rebecca Miller often comes dangerously close to turning these three into caricatures, she knows how to rein herself in, molding them into complex human beings instead.

At the beginning of the film, Maggie arranges for an old college friend named Guy Childers (Travis Fimmel) to be her sperm donor. He is a self-described “pickle connoisseur” (perhaps a subtle allusion to a romantic comedy I adore, 1988’s Crossing Delancey). But then Maggie meets John (Ethan Hawke), a struggling academic/writer who’s married to Georgette (Julianne Moore), a brilliant professor at Columbia. John feels ignored by the far more successful Georgette (with whom he has two children), so when Maggie agrees to read a chapter of his novel, an unexpected romance develops. Cut to a few years later: Maggie and John are married with a kid of their own, but Maggie’s unhappy. She worries about being trapped in a loveless marriage, because she’s kind of tired of John, and especially because: she’s convinced that John is, in fact, still in love with Georgette.

For better or worse, Greta Gerwig has found a niche playing a wistful girl of 30 who’s a little lost, a little eccentric, and a little too smart for her own good. In Frances Ha, she was perpetually falling apart but somehow blissfully unfazed by it; in Mistress America, her wistfulness turned her into a monstrous figure, a woman hungry for social power, whose grandiose tales often defied fact-checking. And now, in Maggie’s Plan, Gerwig plays a woman trying to make a family for herself, despite the fact that she’s never been in a stable relationship for “more than six months”. Gerwig, more than any other actress, has become a poster child for the millennial generation, lost in the fragmented sea of modern life. But that’s not to say being lost is always a bad thing. What makes Gerwig’s performances likable is an often madcap defiance against her own circumstances. In all three films, she is propelled by her own definite notions of what ought to be rather than what is.

Julianne Moore’s Georgette is French, and Moore affects a sometimes distracting but, for me, enjoyably exaggerated accent that sounds like Madeline Kahn’s Lily von Schtupp in Blazing Saddles (even though Lily was German). When we first meet Georgette, she’s participating in a discussion panel, moderated by Wallace Shawn, about the Occupy movement, along with her husband. Georgette appears to be a cold, ruthless, intellectual bitch. She’s fashionably basic, and her little top-knot bun feels like the finishing touch on a woman who could kill you with merely a glance. But Julianne Moore, God bless her, hasn’t turned into Bette Davis yet, and Rebecca Miller has genuine feeling for Georgette, who’s a lot more vulnerable than it would first appear. So instead of degenerating into the villain of the movie, she becomes Maggie’s confidant.

Ethan Hawke has the least flashy performance, which probably makes his work the hardest. John is self-absorbed, the kind of guy who likes girls who like the things he says and does. And since he’s a writer, this flaw is compounded by the fact that’s already the typical needy, self-effacing artist. But even John, it turns out, is capable of love, and not merely a jerk.

The surprise MVPs of Maggie's Plan, however, are Bill Hader and Maya Rudolph, playing Maggie's married friends Tony and Felicia. Maggie once dated Tony, but while their romance fizzled, their friendship blossomed; and she works with Felicia, who says things like, "people say I'm a bitch, but I think I'm pretty nice." Every scene with these two needed to be longer.

Maggie’s Plan feels a tad slight, but the performances of Gerwig, Moore, and Hawke give the film a much-needed substance and vitality. It could easily be just another quirky indie film about quirky New Yorkers; and it while it kind of is that, the film is also something more interesting: a meditation on the ways men manipulate women (and vice versa). Georgette controls John, makes him feel invisible, but she also makes him feel needed; his relationship with Maggie is a complete reversal of that dynamic: he turns her into his housekeeper and book editor. There’s no longer any genuine love between them. And Maggie, always stuck on her own moral impulses, cannot endure a phony marriage, or a marriage that is, as he puts it, dead. “I’m in such deep oatmeal right now!” Maggie cries early in the film. It’s a wonderful, goofy line, indicative of Maggie’s character: She gets herself in plenty of messes without ever knowing how to clean them up; but somehow, she survives.
by Jacob Lusk @ pannedreview
Email ThisBlogThis!Share to TwitterShare to FacebookShare to Pinterest
Tags 2016, Bill Hader, Ethan Hawke, Greta Gerwig, Julianne Moore, Maya Rudolph, Rebecca Miller