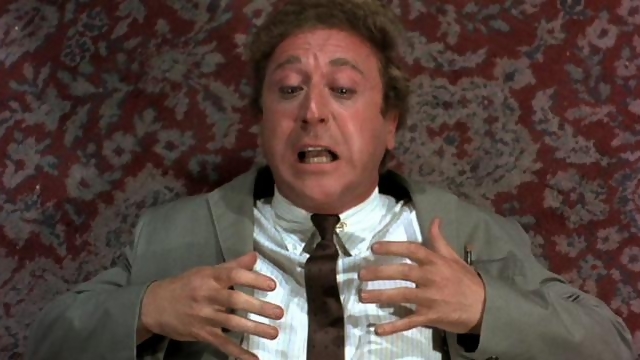 To generations of kids, now grown up, Gene Wilder will always be the madcap maestro of candy, Willy Wonka. But for me, I can't help but picture him in 1968's The Producers, screaming frenetically on the floor to a bewildered Zero Mostel, "You're going to jump on me! I know you're gonna jump on me!" Wilder, who died this week at the age of 83 from complications of Alzheimer’s Disease, had a seemingly endless reservoir of insane comic energy. He gave voice to all of us who were being jumped on by life, because he could scream and flail and cry when we couldn't. In Willy Wonka that energy is relatively reserved, which is why that performance is somewhat unsettling, somewhat less than all the others: the fact that he’s exercising control of this madness feels almost like a false note. I don’t mean to criticize the performance, especially since I too grew up loving Willy Wonka and the Chocolate Factory. But have you seen Gene Wilder in The Producers?

But when you compare Gene Wilder in Willy Wonka to Gene Wilder in The Producers, or Young Frankenstein, you realize just how much he was capable of going bonkers on camera, of channeling that comic energy into a brilliant force that filled us with glee. For me, Gene Wilder's loss of control on screen became a weird source of comfort. I think of the scene in Young Frankenstein when Wilder, playing the tormented grandson of Victor Frankenstein, accidentally spears himself with a scalpel during a rant to a smug medical student, like a maestro ushering in the final note of a symphony with the wave of his baton. He gathers his composure and dismisses the class before plucking the scalpel out of his leg. That marriage of chaos and control, of gentleness and genius, is what made Gene Wilder a great performer.

Mel Brooks got a lot of mileage out of Gene Wilder, casting him in his directing debut, 1968’s The Producers as a sad, meek little man, a tax attorney named Leopold Bloom. Bloom is terrified of his business partner, the big-as-life Max Bialystok (played by the sweaty, comb-over-wearing, scenery-chewing Zero Mostel). When he enters the first scene of the movie, Max is engaged in foreplay with an 80-year-old rich woman. Bloom is horrified and embarrassed, and so neurotic that he can barely bring himself to speak, let alone flee the scene and forget he ever saw anything in the first place. But that scared deer-in-headlights look soon transforms into mania, when Max gets in Bloom’s face and Bloom explodes. Nobody ever screamed as humanly as Gene Wilder did. A Gene Wilder scream isn’t scary or unnerving, it's funny and sympathetic and full.

In Blazing Saddles, which required Wilder to play a more subdued character (a drunk gunslinger-turned-deputy), that sweet, serene nature was enough to win us over; and it was the antidote to the toxic racism lampooned within Blazing Saddles. When Bart, the first black sheriff of Rock Ridge (played with aplomb and savvy by Cleavon Little) returns from a humiliating walk about town, it's Gene Wilder's sad Jim who makes him feel better: "These are people of the land: you know, morons!" Little laughs, and it's as though a weight has been shattered. That was what Gene Wilder did.

Wilder showed early promise in a small appearance in the 1967 Bonnie and Clyde, where he played a similar character to Leopold Bloom: a neurotic nobody who gets temporarily swept up in the drama of the criminals. And even in lesser works, like The Adventure of Sherlock Holmes' Smarter Brother (1975, which he also directed), or the 1986 fiasco Haunted Honeymoon (co-starring his wife, the wonderful Gilda Radner) or the forced 1989 Richard Pryor vehicle See No Evil, Hear No Evil, Gene Wilder shows up and gives everything he’s got. 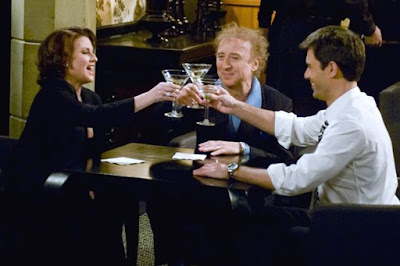 In his final acting appearances, on two episodes of Will and Grace, Wilder played Will Truman’s eccentric boss, who strikes up an unlikely romance with the drunk, monstrously funny Karen (Megan Mullally, in some ways a New Wave Madeline Kahn) after the two of them, along with Will, have all sworn off dating because it’s only brought them heartache. While Will is distracted, they paw at each other like two teenagers at a Christian summer camp, hurrying back to neutral position as soon as Will returns; later, in an office meeting, Wilder resorts to his classic approach: speaking in that soft, lilting voice just before furiously banging his hands on the table in a frenzy of energy, just like he did in Young Frankenstein when Teri Garr said, “Look! You haven’t even touched your dinner.”

by Jacob Lusk @ pannedreview
Email ThisBlogThis!Share to TwitterShare to FacebookShare to Pinterest