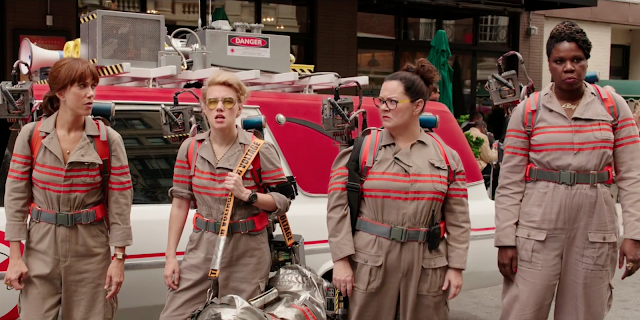 It would have been sweet justice if the new Ghostbusters were really terrific, because its very existence received such vehement criticism from devoted fans of the original film, taking to the Internet—even before the movie was released—to voice their outrage that director Paul Feig was casting four women to fill the shoes of Bill Murray, Dan Aykroyd, Harold Ramis, and Ernie Hudson. But I’d like to think that was a very small cadre of web trolls, because why does it matter that the main characters are all women? What matters more is that it’s funny. Unfortunately, the new Ghostbusters isn’t funny enough. This isn’t the fault of its stars, either. Kristen Wiig, Melissa McCarthy, Leslie Jones, and Kate McKinnon have proven themselves to be very, very funny. The fault must be laid at the feet of our current studio structure, in which even comedies have to be big, eye-popping, exhausting entertainment machines. This system often squeezes the life out of viable projects.

The original Ghostbusters was actually a victim of this same kind of studio bloat: The problem has only gotten worse since 1984. (See Pauline Kael’s seminal essay “Why the Movies Are So Bad” in her book Taking It All In.) Even some of the most beloved movies of the 80s, including Ghostbusters `84, Batman `89, and the Indiana Jones trilogy, all acquire tunnel-vision in the last act, when they ratchet up the stakes the only way they know how: by going as big as possible. It’s the reason we feel a sense of closure when there’s an explosion in a movie. We’ve been trained well.

It’s depressing that a movie like Ghostbusters must adhere to such exhausting, banal conventions, but it’s the reality. And this reality becomes clear right at the beginning of Ghostbusters, when a glowy green ghost terrorizes a tour guide inside a haunted mansion. The terrified man tries to escape from the house, but winds up in the basement, where the floor begins to move as some kind of green oozy stuff bubbles up underneath it and threatens to engulf him. Soon, the powerful and apparently very pissed off ghost rushes through and then the scene ends.

This opening reveals a lot about the movie’s flaws. It’s not just the bigness of the production. The writers, Paul Feig and Katie Dippold, somehow forget that they’re making a comedy. They’re hyper-focused on the story, to the point that it often plays like a straight horror flick, or better yet, a straight Marvel Comics installment. Especially at the end, Ghostbusters looks no different from a superhero movie in which an all-powerful villain destroys New York City, smashing through whole buildings without actually harming any citizens. At times, there is nothing funny happening on screen, which is usually when the film employs the one-liners of Ghostbuster #4, Patty, played by Leslie Jones, who dishes out quips like she’s dealing cards at a casino.

The girls have their moments. I’m a devoted fan of Kristen Wiig, who can do comedy and drama with equal finesse, and who has a knack for whimsical flakiness, a quality — or perhaps an affectation — she exhibits in Bridesmaids when she’s in an uncomfortable or threatening situation or when she’s trying to be funny. But Wiig is basically the straight-man in this film, save a few moments where she dishes out a sliver of her brand of fizzy insanity. In one scene, Wiig bursts into a fancy restaurant where the Mayor of New York is having lunch, trying to warn him about an impending ectoplasmic apocalypse. The secret service agents attempt to eject her from the room as she grips the table, pulling it with her out the door. Wiig is game when it comes to these acts of silly, delightful humor, and I kept wanting more moments like that for her.

And then there’s Melissa McCarthy, so often miscast as the punching bag of any comedy, who sort of fades into the background in this movie. One of McCarthy’s least acknowledged talents is her painfully sharp delivery, which she employs here to some effect. And, just as in Spy, McCarthy is funnier here when she’s competent and in on the joke. But both Wiig and McCarthy are overshadowed by their co-stars, Kate McKinnon and Leslie Jones, which isn’t always a good thing. I’ve relished McKinnon’s Hillary Clinton impersonations on Saturday Night Live, but she gives a surprisingly limited performance in Ghostbusters, ceaselessly mugging for the camera in every scene. McKinnon’s face is like a neon skyline: every attribute is screaming for your attention. The schtick is funny until it’s not, and until it feels like schtick and nothing more. McKinnon’s Jillian Holtzmann stands in for Egon, the nerdiest member of the original Ghostbusters, played by the late Harold Ramis. But Ramis had some genuinely human moments, like when he tells a woman, “I collect spores, molds, and fungus,” knowing she’ll be turned off by his hobby but nonetheless defiantly proud of his interests. Or later, when the ghostbusters are about to use their ghost-catching devices for the first time and realize they could be endangering their own lives, Egon says, “I feel personally responsible.” Beneath his nerdiness and his savant-like knowledge, there’s a beating heart. McKinnon’s character never grows beyond the conception of a one-note SNL sketch. Leslie Jones fares better, even though she’s ostensibly cast as the stereotypical sassy black character. She’s the most endearing one of the bunch, hired as the fourth Ghostbuster because she’s a New Yorker who knows the city inside out.

Fans of the original will enjoy the cameo appearances of Bill Murray, Dan Aykroyd, Ernie Hudson, Annie Potts (who’s so underrated), and Sigourney Weaver. But as much as I enjoyed seeing these wonderful performers make little appearances in the film, part of me longs for movies that aren’t so dependant on nostalgia. The new Ghostbusters tells its own story to be sure. It’s not a direct remake. But its existence is absolutely based on people’s nostalgia for the original, which may explain why so many fans were annoyed about Paul Feig’s casting choice. His casting is fine. The movie, though, needs work.