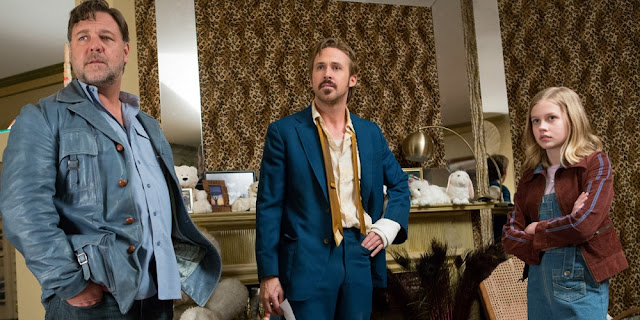 In The Nice Guys, Ryan Gosling and Russell Crowe play private eyes who are forced to join together in their pursuit of a missing porn star named Amelia, whose mom (Kim Basinger) works for the Department of Justice. The film is set in Los Angeles in 1977, which proves to be a fascinating milieu. Writer-director Shane Black immerses us in some of the social crises of the day: gas shortages, the alarming rate of air pollution in L.A., the post-sexual revolution rise of access to pornography (and the way this access affects various groups of people). But The Nice Guys fundamentally doesn’t work. Like so many other neo-noirs of late, it forsakes the thrill of a crackling good mystery for the allure of irony. The result is a disappointing movie full of interesting details and performances.

Shane Black clearly has an affection for the mystery/film noir genre. After making his reputation as a screenwriter for the Lethal Weapon movies, Black wrote and directed the indie favorite Kiss Kiss Bang Bang (2005), itself an ironic ode to the trashy delights we experience in consuming pulpy mystery thrillers. That film starred Robert Downey, Jr. and Val Kilmer, playing an actor and a detective, respectively, who get embroiled in a crime in modern-day Los Angeles. If your experience was anything like mine, that movie worked on you, once. Watching it a second and third time, I felt that all its charm had somehow been drained out, and all that was left was a chatty, too-clever-for-its-own good plot that was so ironic, so hip, that it wasn’t willing to let us truly enjoy the actual mystery.

The Nice Guys feels like the fourth or fifth viewing of Kiss Kiss Bang Bang. It's tolerable, at times funny, often meandering and jumbled. Once we figure out the mystery, which is confusing and aimless for half of the movie, the film’s quirky, self-conscious sensibility becomes increasingly tired. It’s as though Shane Black deliberately muddled the story for as long as possible because he knew there wasn’t much to it. But there is one encouraging note about Black’s directing: He has a sharp eye for genuinely comic situations.

Perhaps the funniest scene involves Russell Crowe’s character, Jackson Healy, confronting Ryan Gosling’s character, Holland March, in a public restroom. March must maneuver all of the following while sitting on the toilet: a handgun, the door of the bathroom stall, the magazine he’s using to cover his privates, and the cigarette in his mouth, which he tries to hold on to while speaking to Healy. It’s a terrific set-up, and Gosling plays it perfectly. He’s utterly sincere, and that works for his character.

Has Ryan Gosling ever gotten to do this much physical comedy in a movie before? His performance is the one pleasant surprise of the movie. Gosling is such a stoic actor, like a modern-day James Dean without the allure or the facial ticks, that his performances often get lost amid other more interesting and compelling actors. Here, Gosling uses his habitual brooding for comic effect, perhaps because Shane Black casts him as a relentless, bumbling screw-up, a single father whose thirteen-year-old daughter Holly (Angourie Rice) often aids him in his investigations, much like the character Penny in that old cartoon series Inspector Gadget. (Rice, incidentally, gives a fine performance: her character is the epitome of the 1970s latchkey kid, raising herself, and practically raising her dad: she even drives when he’s had too much to drink.)

While it’s delightful to watch Gosling play a fool and a failure, it’s disheartening to see a puffy Russell Crowe, dressed in baggy clothes, playing a sad version of his character, Bud White, in L.A. Confidential. Bud White was fit and competent and driven by a sense of duty. Jackson Healy feels utterly useless. He’s like a sad puppy. And Crowe seems utterly lost in this movie. He only comes through when he’s attacked by bad guys and gets to do some fighting. There are some movie stars who can do sad really well; but Russell Crowe has been branded the hero, and that is where his talent lies.

Fallen knights like Holland March and Jackson Healy, who are really just the latest iterations of Don Quixote and Sancho Panza, are all too familiar in this genre. Filmmakers cannot seem to get enough of the idea of the loser private eye sinking amidst all the rot and decay of Los Angeles. These themes do seem appropriate in L.A., but it’s hard for Shane Black to improve on Chinatown or The Long Goodbye. Curtis Hanson, director of L.A. Confidential, understood how to explore that decay with tongue in cheek (with the help of the sickly brilliant mind of writer James Ellroy). All of these movies suggest that politics, not Hollywood, is the real source of corruption. It’s a compelling argument, and a canny defense of the arts (because they so often need defending against people who treat them as suspect), but even that defense gets mucked up in The Nice Guys, because we’ve stopped caring by then. (Although there’s a great joke at the end about a porn film that’s been made to raise consciousness about the government’s dubious relationship with the auto industry.)

There’s also a really unsettling thread in The Nice Guys: the movie keeps putting young teenagers in weird sexual situations. At the beginning, a young boy sneaks into his parents’ room in the middle of the night and pries a dirty magazine from under the bed. While he’s pouring over the pages in the kitchen, a car crashes into his house. (In one of the best shots in the movie, we see the headlights through a window, and suddenly the car loses control and tumbles down the canyon.) When the boy investigates, he finds that the driver is Misty Mountains, one of the centerfolds in the very magazine he was reading! And not only is Misty Mountains right there in the flesh, but her flesh is prominently displayed as she breathes her last in front of this very confused boy. (It’s an amusing jab at puritanical self-guilt: Did his actions induce this dramatic form of punishment?) Later, Holland’s own daughter winds up at a party of porn stars, and she wanders around asking questions about the missing girl in her dad’s case, somehow blasé about all the things going on around her.

Black is obviously making a point here about how ineffective these men are at their jobs that they wind up relying on the observations of children. He both mocks and affirms the old cliche that children are growing up too fast, seeing too much. “These are the kids my daughter has to grow up with,” Holland moans after encountering a disturbingly frank 13-year-old boy. After all, Los Angeles, which has always been branded as a city of sin, is home not just to celebrities and pornographers, but regular families with kids, just like any other place. It’s the convergence of these worlds—the glamorous, the seedy, and the ordinary—that Shane Black seems most interested in.