Jodie Foster's "Money Monster" is a compact and compelling thriller about corporate greed and class rage. 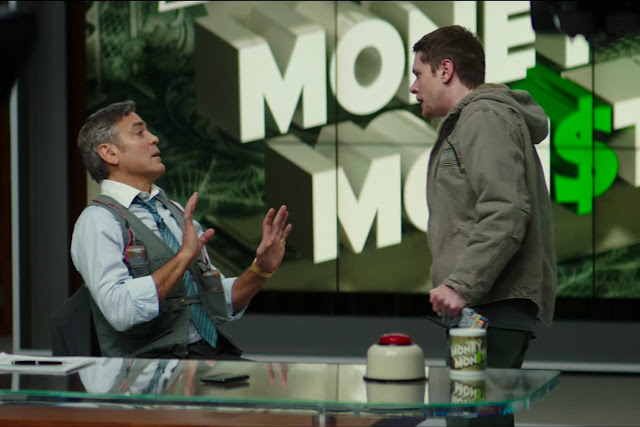 Money Monster, Jodie Foster’s fourth film as director (following 2011’s The Beaver), is a compact, delectable, indignant thriller that takes place within the span of about ten hours, but has all the power of a three-volume Charles Dickens novel. Dickens understood how the class system, succored by greed, devalues our humanity, and in its own way Money Monster bristles with indignation at the ways human beings stomp all over each other for the sake of greed. Perhaps Money Monster is ultimately a shallow dream about social change, because I don’t think any of us expects a Hollywood movie to summon some new classless society. But the film dramatizes all the rage that is bubbling up in real people right now, and in that sense, Money Monster is urgent and compelling. It’s also funny and touching and sad, and populated with a dozen or more characters, all of whom have, by the end, seized our attention either by their loathsomeness or their lovableness (or both, as in the case of George Clooney’s character).


George Clooney plays Lee Gates, the obnoxious host of a weekly show called “Money Monster”, on which he gives viewers hyped-up, often reckless advice—steeped in the false security of statistics and the force of his own personality—about how to invest their money. It’s really a sideshow: Gates, who often enters each episode garnished with some ridiculous accessory—like a golden top hat— enters the stage dancing to some ridiculous hip hop song, accompanied by two young women dancing on either side of him. Gates is essentially Ebenezer Scrooge for the digital age: he loves money and himself, although he hates being alone (because really, he hates himself). “I haven’t eaten alone since the 90s,” Gates says after a dinner engagement cancels on him. (He’s shocked that anyone would cancel on him.) He has a friendly but complicated relationship with the show’s producer, a seasoned broadcasting show-runner named Patty Fenn (Julia Roberts), but even she has gotten sick of his annoying personality. She’s about to leave the show for a competitor, only she hasn’t told him so yet.


It’s initially a shock to see Clooney playing such an ugly human being, but that’s the point, of course. We know from the get-go that this is a film about one man’s transformation. This may be the movie’s biggest misstep, because making the story all about Lee Gates’s change of heart feels meaningless in 2016. But it’s also a classic way to grab the hearts of an audience, and Money Monster never loses sight of this second goal: to be a crowd-pleasing piece of entertainment, which it is.


The drama, of which readers are probably aware by now, involves an angry young man named Kyle (played by Jack O’Connell) who’s lost his life savings because of a bad investment deal he made based on Gates’s recommendations. It turns out, Gates was plugging the stock of a massive corporation called Ibis, which suddenly “misplaced” 800 million dollars. We see the show’s technicians cue up a previous episode, where Lee urged: “It’s safer than a savings account.” Not so safe, as it turns out, for Lee, who finds himself strapped to a bomb, and Kyle threatening to blow the whole building to smithereens unless he gets some answers.


Money Monster is an exciting thriller, one that doesn’t let go of our attention once it’s grabbed hold. Much of this film’s appeal is, surely, linked to its two stars: But Clooney’s character is utterly unlikable for at least the first half of the movie. It’s only when we see how insignificant he really is to other people—except as a ratings bump—that we start to feel for him. Julia Roberts, who knows how to be mouthy and in-control, offers up a pleasing performance, and her character Patty is ultimately the one we most sympathize with, at least at the beginning. Patty decides to stay in the control room despite the impending bomb, and she desperately feeds Lee with information through his earpiece, hoping something will quell Kyle’s anger.


The film succeeds more on the level of a satisfying thriller, perhaps less as a provocative critique of American values. It’s hard to really buy what they’re selling when you know that Jodie Foster, George Clooney, and Julia Roberts are all millionaires. However, it’s hard not to be affected by Jack O’Connell’s performance as Kyle: He’s a working man who has had too many bad things happen to him, and now he’s lost control of his rage. How many suffer in silence in the real world, until they’re consumed by the years and decades of calcified anger? (O’Connell represents smart casting: he’s relatively unknown, which helps him embody the working man persona of his character.)


Kyle is a man who’s lost everything he values. When Kyle’s pregnant girlfriend confronts him (she’s summoned by police to try and talk some sense into him via Skype), she completely belittles him (and her piercing, embittered insults are broadcast to millions). Conversely, Lee is a man who has nothing of real value. That sort of makes these two a perfect match: The bond that forms between them—which is surely deeper than mere Stockholm Syndrome—is one of the most interesting elements of the movie. It’s not long before Gates himself joins in Kyle’s quest, which leads them to the CEO of Ibis, played by Dominic West.


The confrontation, incidentally, is pretty fantastic. West plays the CEO villain with icy pompousness. He’s exactly the kind of rich, privileged, arrogant prick that we can project all of our own class rage onto. (And maybe this is a weakness, because maybe it lets Lee Gates off the hook too much.)


Director Jodie Foster may be striving for some kind of Frank Capra-esque indictment of our monetary system, but she doesn’t let prestige hamper the power of her story. Nor does she squander opportunities for levity. The film is sprinkled with funny, tension-relieving moments, and it’s to her credit that Money Monster, which sat on the vine for a while in production deals, is as riveting and emotionally powerful as it is. It’s not perfect, but Money Monster is a corporate concoction with brains and heart, anchored by the force of three of our best stars.