The genre-defying film "A Bigger Splash" works an evocative spell on the viewer. 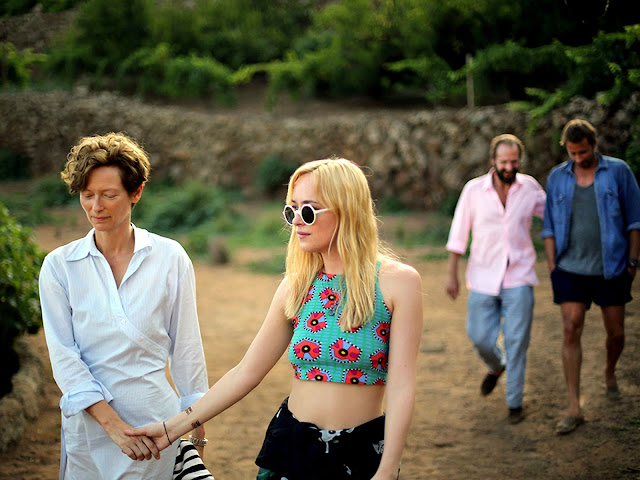 Truthfully, A Bigger Splash isn’t interested in genres but in people, and as such it flouts conventions as it honestly excavates the hearts of its characters — Marianne, Paul, Harry, and Penelope — who have been pushed together (for reasons explained later) on a small Sicilian island. And while [mild spoiler] the film does end with an act of violence and a death, to call it a thriller would be inaccurate. And even though the film is certainly erotic, it doesn’t wear its eroticism on its sleeve. Director Luca Guadagnino fixates on the balancing act of being human, of toggling between goodness and badness, love and hate, friendship and enmity, of being spurred by our own little tragedies and triumphs and insecurities.

Here’s the plot: An English rock star named Marianne Lane (Tilda Swinton) is recuperating on the Sicilian island of Pantelleria, along with her boyfriend Paul (Matthias Schoenaerts). Marianne isn’t aloud to speak for several months because her vocal chords have been damaged. But the couple’s idyllic summer alone together is threatened by the unexpected arrival of Harry (Ralph Fiennes), Marianne’s ex, a volatile music producer, who brings along his mopey, bored 22-year-old daughter Penelope (Dakota Johnson). Marianne and Harry have maintained a friendship, although it’s obvious from the beginning that Harry is not over her. Quickly we suspect that Harry and Penelope are interlopers with ulterior motives.

Director Luca Guadagnino lets the tension build without revealing too much too soon. He’s also concerned with another priority: feasting our eyes on Pantelleria’s natural beauty. This island is a sun-scorched paradise: it’s dusty and hot but bursting with life, life embroiled in a constant struggle for survival against the heat. It’s easy to be overwhelmed by all the sights, but there is purpose behind this beautiful yet hard setting. We know when humans have been placed in picturesque little corners of paradise, they are going to wreck it for themselves, and half the fun is in watching them bring about their own destruction. (If that’s your idea of a good time; I can think of worse ways to spend the evening.)

Tilda Swinton has admitted in interviews that the gimmick of not being able to talk appealed to her as an actress. In the hands of a lesser performer, such a contrivance might have been limiting. But Swinton has striking features: she’s always interesting to look at. A Bigger Splash concentrates our focus on her expressions and her body movements. She occasionally does speak, when she’s provoked, or in flashbacks, but the performance is full and commanding without words. As Penelope, Dakota Johnson, whom viewers will remember as the ingenue in 50 Shades of Grey, embodies a certain blasé sexiness: her most effective power is that she’s always bored. Matthias Schoenaerts, playing Paul, delivers the most sympathetic performance. We learn that Paul tried to kill himself — by crashing his car — and according to Harry, “it’s the most interesting thing he’s ever done.” Paul is haunted, vaguely, and we’re never quite sure if he will exorcise his demons. Harry has demons too, but he likes to invite his demons in and party with them, which isn’t really Paul’s style. Marianne finds herself torn between these two men: one of them kind and compassionate and nurturing, the other one wild and unpredictable.

The film takes unexpected turns, partly because these four are such mysteries to us. For a long time, it’s not clear if Harry and Penelope are really father and daughter. Penelope has only just met her dad recently; but their relationship feels downright Oedipal at times. (Harry even admits he finds her attractive.) And even as Penelope half-enjoys the attention of her newfound father, she’s obviously unhappy about being pawned off on him, because he’s erratic and drinks too much and riles people up. It’s also clear that both Harry and Penelope want to infiltrate, even destroy, Marianne and Paul’s peaceful relationship.

Guadagnino’s great skills as a filmmaker are his immersive powers and his restraint. We see Marianne and Paul sleeping on the beach, covered in mud; we’re right in the backseat of their jeep as they tear across the seemingly endless winding roads toward the airport. These scenes give the film texture, they attach us to the world of the movie. And the tensions between the characters unfold gradually, as if bewitched by the island and rendered sluggish. There’s a great little scene in which Penelope is pealing and devouring a fruit (I couldn’t tell you what kind of fruit) as though she's defiling it: everything she does, even this, is sensual and fraught with temptation. It’s as though Harry has only brought her with him to tempt Paul so that he can get Marianne back. Later, when Paul leads Marianne to the beach by way of a dusty trail through the brambles, we sense that it’s Penelope who’s leading him, a Siren in his own midst.

Guadagnino gets a lot of poetry out of Pantelleria, but it’s muted poetry, faded in the blistering sun. Yet under the surface A Bigger Splash is a movie as dramatic as something out of Tennessee Williams, without the hyperbole. This movie works an evocative spell on us, like a purple, dreamy myth. But I could do without that title.
by Jacob Lusk @ pannedreview
Email ThisBlogThis!Share to TwitterShare to FacebookShare to Pinterest
Tags 2016, Dakota Johnson, Luca Guadagnino, Matthias Schoenaerts, Ralph Fiennes, Tilda Swinton