'Whiskey Tango Foxtrot' is a muddled war comedy with moments of brilliance amidst its own uncertainty. 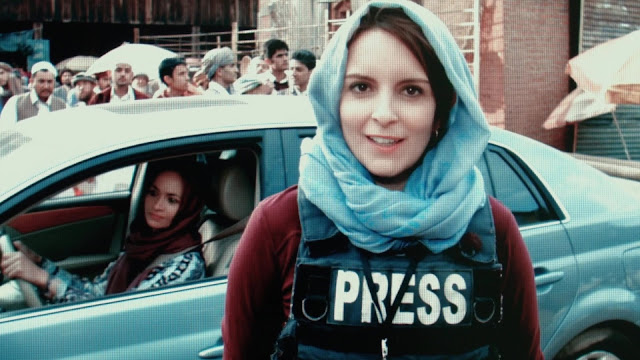 In Whiskey Tango Foxtrot, comedy darling Tina Fey plays a harried war reporter sent to Afghanistan in 2003, where her coverage of the war becomes increasingly ignored, much like the war itself, in the wake of other more exciting stories (as in Iraq). Whiskey Tango Foxtrot represents a departure for Fey, whose previous vehicles were merely cashing in on her success with 30 Rock, a show that, while never commanding big ratings, garnered an avid cult following and oodles of critical praise and awards.

My feelings about this movie vacillated almost from the beginning. The movie opens in 2006 during a rager of a party, where Fey’s character, Kim Baker, curses like an Afghani sailor (if such a thing existed in this landlocked desert country). The subtitles reveal the depth of her knowledge after having spent three years in this country, which has somehow, strangely, become a home to her. But Kim is an utterly ambivalent character, which is one of the movie’s biggest problems.

Kim’s ambivalence makes sense. Whiskey Tango Foxtrot effectively and correctly explores the war in Afghanistan as a complicated, often confusing project, and a mission that becomes increasingly more complicated by our involvement in Iraq. Kim jumps at the chance when she’s initially offered the job because she’s desperate for a change. As Kim puts it, she’s afraid she’ll become “an ottoman” in her office. What’s more, she’s involved in a comfortable relationship that’s become a little too comfortable. She and her significant other exchange brief words at the airport (he’s just returning from a business trip, and she’s departing for what she thinks will be three months in the Middle East). Her boyfriend suggests a quickie in the mens’ room, which Kim rejects, and that’s almost the last we see of him. (He turns up in a few abortive Skype conversations, marred by the bad internet connection.)

Kim’s arrival in Afghanistan only further expands her feelings of ambivalence. Afghanistan, we’re told, is a country that literally has shit in the air, but for Kim, it represents purpose and career advancement and the chance to cover something real and important. She befriends a British reporter named Tanya Vanderpoel (Margot Robbie), who requests that Kim hand over her stacked bodyguard Nic, for sex. Kim is shocked that anyone would ask her permission, and still more shocked when Robbie’s character appraises Kim’s sexual capital: “You’re probably a 7 in New York, but you’re a 10 in Afghanistan.” Kim’s baffled reply: “What are you, then, a 14?” (Robbie is, after all, the girl who explained boring housing market terms to us in a bubble bath in The Big Short.)

Whiskey Tango Foxtrot is a fascinating movie, but it doesn’t always work. The directors, Glenn Ficarra and John Requa, have a habit of introducing interesting scenes, scenes which might explore characters in great depth, and then short-handing them. We’re never sure if this is supposed to be a buddy movie about Kim’s and Tanya’s friendship as two reporters who find that misery truly does love company. The directors provide big moments in their friendship (a near-death experience, an act of journalistic betrayal), but these events are the sum total of their relationship: There’s no connective tissue to imbue these big moments with dramatic weight.

Part of the problem is that directors never know what to do with Tina Fey in movies. They seem to be stuck because of her character on 30 Rock. That show gave Fey just the right kind of character: the vaguely desperate, almost has-been, funny-smart nerd Liz Lemon. But Fey’s transition into movies has not been as successful. Whiskey does avoid the usual temptations of making Fey a desperate single woman looking for love (as in 2013’s Admission), and her romance with an Irish photographer named Iain (played by Martin Freeman), has moments of charm. (Iain first appears sleazy and singularly interested in sex, but he develops into a more interesting character.) But Whiskey Tango Foxtrot is a sort of a drama that’s confused by its star, a comic actress. The whole movie feels muddled and strained, and at times I couldn’t wait for it to end.

What’s more, the directors have fitted an existential and unapologetically wistful movie into a cookie cutter format. It explores questions of great nuance, but then reverts to its genre conventions, like the flawed romance between Fey and Freeman which must be redeemed. (But, to give the movie some credit, it never stops dealing with ambiguities. When Kim visits a soldier who lost both legs, she's overwhelmed with the feeling that her reporting brought about his injuries; he's able to see it differently though: it happened. It's past. Accept it and move on.)

The movie gets Afghanistan right in the sense that it never quite figures the place out. It echoes are real problems interacting with Middle Eastern countries: We don’t get their culture. Kim makes a number of rookie gaffes, like forgetting her head-dress or entering a gathering of angry men in the street, with camera in hand. But even she’s making foolish mistakes, she’s also making bold choices. Perhaps the most poignantly funny scene is when Kim informs a marine general (played by Billy Bob Thornton) that the well they keep digging for a small village, one that keeps getting mysteriously sabotaged, is actually inhibiting the social life of the village women, whose only time to interact with each other occurs during their walks to the river for water. Kim becomes their ally in that moment, and in turn she becomes what she’s wanted to be for the whole movie: necessary.

This movie never figures out what it is. It’s a curious failure, and as such, a mirror of our Middle Eastern entanglements. But sometimes failures are more fascinating than successes, and in its own way, Whiskey Tango Foxtrot achieves moments of comedic brilliance and insight that make it impossible to dismiss.