'Hail Caesar' lets a dull plot get in the way of a good time. 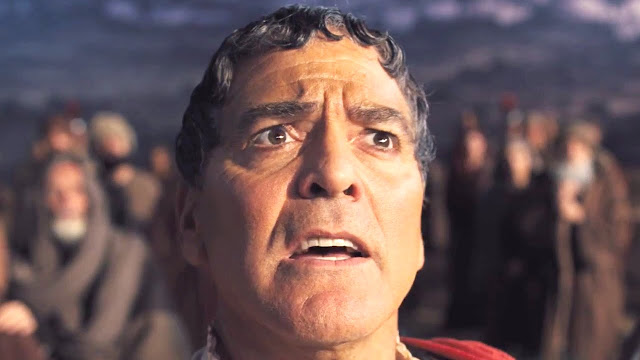 Hail, Caesar! takes us back to Old Hollywood, where the movie stars were cattle and the studio executives were kings, where those same executives traded the secret sins of lesser celebrities to protect their more lucrative properties from the scandal-mongering gossip rags. It’s the latest movie by the Coen Brothers, one that many people have been looking forward to because of the trailer, which is terrifically appealing. Sadly, the movie falters for most of its hour-and-forty-five minutes. The film’s biggest problem is its banal film noir-esque plot, which frequently gets in the way of all the interesting things going on around it.

Plots are wonderful things when they work and when they’re arresting. I found the lack of plot-adherence in Inherent Vice maddening, but I think Hail, Caesar! could have profited from that movie’s casual, who-cares attitude. The Coen Brothers never seem to be sure which attitude they want. Most of the time, the movie slavishly grinds through its own plot with little to show for it, and poor Josh Brolin suffers through with as much pluck as he can. But sometimes the movie does let loose enough to simply entertain us, as in a terrific scene recreating a Hollywood musical, in which a bunch of sailors, led by Channing Tatum, tap dance in a bar. The number they sing playfully laments the fact that they’re going off to sea and there won’t be any ladies to keep them company. 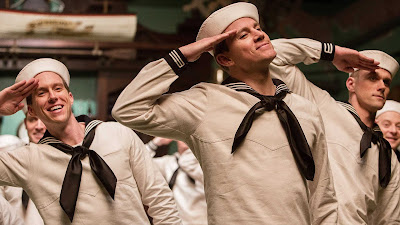 Like so many great musicals from the period Hail, Caesar imitates, this scene is purely entertaining on multiple levels: the skillful dancing and singing is fun to watch, the humor is both clever and sharp, and the choreography is in sync with the jokes, as when Channing Tatum glides across the bar much to the chagrin of the rotund bartender, who frantically grabs beer bottles about to be stepped on. Watching that scene, we’re reminded of the pleasures to be found in the best old movie, movies that work as delightful entertainment (there’s a kind of magic at work here) and as innuendo: it’s pretty clear the sailors have agreed to make do with each other by the end of the number, and we see it in their dance moves. This sexual suggestiveness is funny and a slightly sharper and more pronounced version of the innuendo we see in great musicals of the period like Singin’ in the Rain. It's the best scene in the film.

But then the plot returns. The plot involves Eddie Mannix, an executive for the fictional Capital Studios (played by Josh Brolin), who’s trying to figure out who kidnapped one of his stars, Baird Whitlock (George Clooney) off the set of a movie about the Roman Empire and the coming of Christ. Mannix is a harried man, constantly juggling the demands of the talent, the technicians, the press, and his own conscience, because he feels neglectful of his wife and kids. (He frequently goes to confession, where he bemoans his secret smoking habit much to the annoyance of the priest, who’s underwhelmed by Mannix’s “sins.”) Now he's trying to keep this kidnapping a secret, until he can figure out how to get his star back. But this story never carries much weight: it's something to pad the running time and give the movie a sense of singular direction, when what it really needs is more extravagant recklessness.

The Coen Brothers have created a sort of menagerie of all the types of people we remember from the period: the gruff studio exec, the dutiful secretary, the big star (Clooney), the new star, the sexy ingénue, the trashy journalist, even a terrifying editor (played by Frances McDormand), who sits in her dark room smoking over film prints, and whose scarf gets caught in the editing equipment in a disturbing scene.

Alden Ehrenreich plays Hobie Doyle, the kid who’s made his name in cheap Westerns and whom the studio is grooming for stardom. (He’s earnest and charming as hell and he lassos everything from a rope to a spaghetti noodle, but when Mannix plucks him out of a horse movie and thrusts him into a 19th-century English period piece, he’s all thumbs.) Ehrenreich is terrific in this, and in one scene--another movie recreation--he strums on a guitar and purs out a song about moonlight, like the scene in Rio Bravo where Dean Martin and Ricky Nelson sing together. 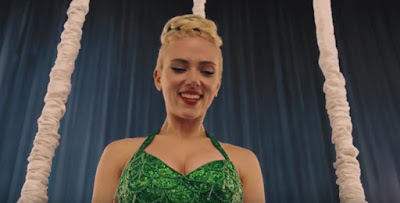 Scarlet Johansson plays DeeAnna Moran, the sexy ingénue, who in her opening scene, in which she’s playing a mermaid leading a bunch of other mermaids in an elaborate aquatic show, looms elegant, almost as bewitching as Grace Kelly was in that first shot of her in Rear Window. But when the cameras aren’t rolling, DeeAnna sheds her elegance, talking like a harried New York waitress and trying to avoid putting her illegitimate child up for adoption.

All these characters fail to add up to anything bigger. It’s as though the Coen Brothers were merely making a documentary about what Hollywood was like seventy years ago. The joke at the heart of the film, which is clever even if it, like everything else in this movie, has been done before, invokes Communism and the role Hollywood plays in sating the masses. But it’s hard to take such a pill from the Coen Brothers, who always seem so contemptuous of their audience even as they take our money and Hollywood's accolades. Parts of this movie are terrifically entertaining, just not enough of them, and by the end, the film’s darker and more existential humor wears thin. Viewers are likely to remember with fondness the lighter recreations of the movie past, and wish the Coens had conjured up a whole feature of such “simple” magic. 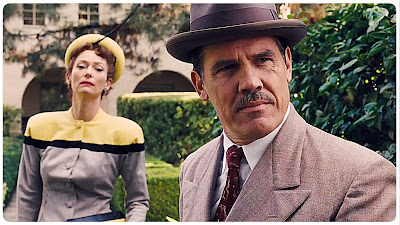