The Revenant: Who Will Survive, and What Will Be Left of Them? 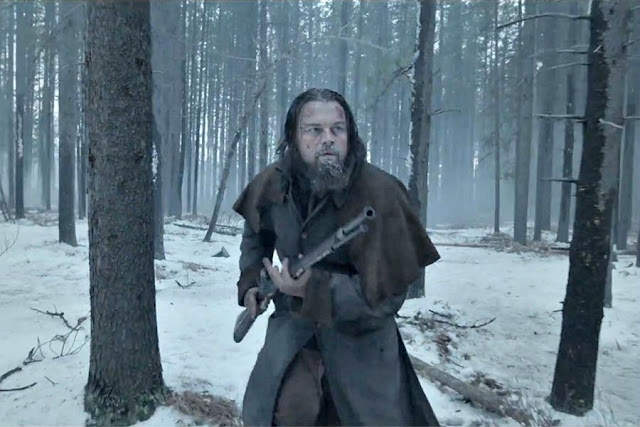 When Leonardo DiCaprio, playing a vengeful fur trapper stranded in the wintry Wyoming wilderness, slides into the eviscerated gut of a dead horse in order to stave off hypothermia (not a reference to The Empire Strikes Back), we might be tempted to confuse intense survival skills with great acting. Indeed, the thrust of The Revenant, the latest film from the dazzling director Alejandro Iñárritu, is to see how hellish DiCaprio’s battle with nature can become, and just how much the actor can endure, on his quest for vengeance. He’s playing Hugh Glass, a real-life fur trapper (although the film has been considerably altered from the actual story) who was left for dead by the rest of his men, all of them weary from a barrage of Indian attacks and the numbing, cumulatively deadening effects of the harsh winter conditions.

Glass barely survives a bear attack early in the film. The attack scene is memorable: the bear looks vividly real (I’m assuming it is the product of CGI), and its viciousness is both fierce and strangely natural, as it stomps on Glass’s inert body and sniffs his face, examining its prey just after mauling him like a side of beef. Glass has too many wounds to name, and he’s rendered speechless after the bear bites his throat, Hound of the Baskervilles-style. When most of the men in the group, including the military captain in charge (the lovely, sympathetic Domhnall Gleeson), move on, they leave Glass in the care of Fitzgerald (Tom Hardy), a gruff, determined, self-serving man if ever there was one. Also sticking behind is Glass’s son Hawk, a half-breed whose mother was an Indian. (This fact doesn’t exactly endear him to the other men in the company.) Flashbacks reveal a devastating attack that left Glass’s wife dead and, as such, infinitely strengthened the bond between father and soon.

But Fitzgerald doesn’t have any feelings of sentiment for Glass or his son, and being held back by them means risking Indian attacks and the loss of precious loot and pay. So Fitzgerald double crosses these two, and leaves Glass in a shallow grave where he will presumably freeze to death, if his injuries or infections or trauma-induced fever don’t get him first. What follows is a pure and simple survival and revenge story, filtered through the majestical gloss of Iñárritu’s cinematic mind and the wonderful camera-work of cinematographer Emmanuel Lubezki. (The two collaborated on last year’s Birdman as well.)

Watching The Revenant is like getting beaten mercilessly. When it’s over, you’re not sure what hit you, but while it’s happening you may begin to feel the effects of Stockholm Syndrome: feeling some kind of sick dependence and affinity for your aggressor. It’s particularly hard to be critical of a film like The Revenant, which is ready-made as an Oscar-generating machine. Fans of Leonardo DiCaprio, who feel he’s been unduly ignored by the Academy for years, will likely expect a statuette for him for this, for simply enduring this film. And while DiCaprio is a good actor, this movie doesn’t exactly showcase asking skills. It showcases survival skills. We see a man brought down again and again by nature and by other men, and the vengeance brewing inside motivates him to get up and keep going, like Michael Myers, the unkillable monster of the Halloween movies.

Does such “acting” really merit awards? Does Iñárritu deserve recognition for putting his cast and crew through such hellish circumstances in order to make an admittedly beautiful-looking movie? And even if the beautiful vistas bowl you over, there's plenty of carnage, and plenty of survivalist gore, like when DiCaprio pours gun powder over the hole in his throat.

Of course, in some primal way, The Revenant is a very powerful and affecting film. Iñárritu makes sure of this: the austere Wyoming setting channels both feelings of awe and feelings of terror. Like that wonderful Jack London story “To Build a Fire,” nature sorts out who’s fit to survive her wrath; but unlike the London story, The Revenant doesn't invest us enough in its plot of revenge. I at any rate did not particularly care what happened to Glass and Fitzgerald. I wanted the suffering to end. The finale, which of course features a showdown between the two, is actually quite frustrating. These skilled marksmen somehow manage to miss each other numerous times, and when Glass finally has Fitzgerald exactly where he wants him, he’s stopped in his tracks by a bit of mysticism—about letting the gods do your vengeance for you—uttered by a friendly Indian from earlier. (That friendly Indian, incidentally, is dispatched in a particularly horrifying way.)

The Revenant is, somehow, both magnificent and mediocre. As beautiful as it is, as primal and as tough and hard-scrabble its tale of survival, the movie doesn’t quite work as entertainment. We can feel the film straining for prestige in an obvious and calculated way, and it represents yet another example of movies demanding our respect by brow-beating us, by whipping us into submission.

YES!!! finally. I found it played more like a very violent videogame filled with real actors and real settings (and full symphonic orchestral backing.
Probably the most horrifying aspect of the film is the way in which audiences (because of gaming?) have become numbed to horror, torture, death, violence..........
If this is Oscar material it will create a new genre - After Marvel Comic dramatisations look out - here come dramatised video games based on high kill rates and gut wrenching special effects
Margaret