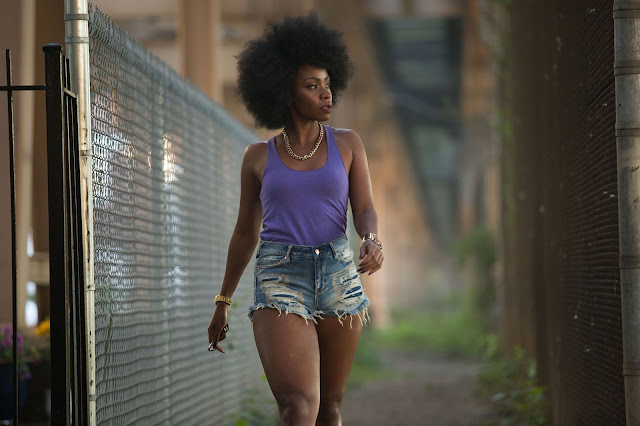 You haven’t lived until you’ve seen Spike Lee’s latest joint, Chi-Raq, the most exuberant, audacious, urgent film I’ve seen all year. Lee’s films haven’t always charmed me, despite his consistently strong work as a stylist and a social commentator. Perhaps part of the problem is that I’ve never seen them in the moment, until now. Chi-Raq is a modern-day riff on the Greek play Lysistrata, by Aristophanes. With rhyme and verse and music, Lee dramatizes the very real pain and violence rampant in the streets of Chicago, glibly renamed Chi-Raq by residents who live in their own version of terrorism right here on American soil. Spike Lee goes all in with Chi-Raq.

This film is a great big stick of dynamite, destined to offend as many people as possible; it’s both a comedy and a tragedy, a musical, a manifesto, a battle cry, and a lament. The “star” of the film (there are many characters that might share this title) is Lysistrata, played by the radiant Teyonah Parris, girlfriend of an up-and-coming hip hop artist who calls himself Chi-Raq, but without the irony. He embraces the violence, and is one of the gang leaders who live and die by the gun. Lysistrata refuses to see past the façade of fame and glory and music, until several violent attacks hit too close to home. Then she meets Miss Helen, a neighbor who spends most of her time reading. She’s a self-contained social activist just waiting for circumstances to unleash her and call her to action. Miss Helen convinces Lysistrata to do something about the violence, and Lysistrata unites the women in her community, convincing them to go on a sex strike. “No peace, no piece” is their motto, and their decision erupts across the globe as women from every tongue join in the fight against violence by denying sex to their men.

Along the way, we get Samuel L. Jackson, spruced up in colorful suits and a hat, as our emcee, narrating the film with his usual wink-and-a-smile charm and his brash, commanding presence. And we get John Cusack in an unlikely but powerful performance as a white minister of a black church, serving the community he grew up in. Cusack delivers an intense monologue-sermon-eulogy during a funeral for a 7-year-old girl. (She was killed in the midst of a recent episode of gunplay between gangs.) Cusack’s sermon is at times a grand-standing lecture on the statistics of gang violence and racial injustice, at times a riling call to action. Lee is deliberately ambiguous here: The emotionally-driven service is by turns a show-stopper and a place to mourn out in the open, in a community.

Chi-Raq is in many ways a throwback to some of the more influential work of Luis Bunuel and Jean-Luc Godard. In Weekend (an insufferable movie), Godard often pointed the camera at people so they could rant about the evils of capitalism and other assorted topics. Lee uses his camera similarly. Chi-Raq is a really good rant of a movie, but it's more than that. In Chi-Raq, these moments of sermonizing are just part of this movie’s garish, delightful, indignant brio. Lee celebrates the various possibilities of movies, never holding his movie hostage to the constraints of realism or plotting. Some may call it uneven—and there are moments when the film doesn’t totally hang together—but Chi-Raq is ultimately a masterful piece of filmmaking. It evokes extreme emotions, and the performances are big and powerful and in your face. 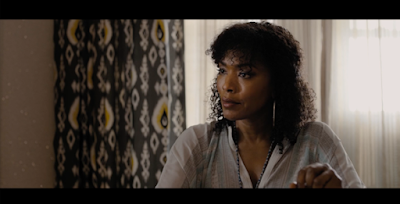 Angela Bassett's performance emerges as possibly the best in a slew of standout performances. Bassett has such power in her voice, and she commands the screen in every scene she's in. And Teyonah Parris is like a gift from the gods. She's a stunning beauty, she's witty, and like Angela Bassett, she can part the seas with a word or a look.

Of course, Chi-Raq isn’t for everybody, but it should be. The film's brash discussion of sexual politics and its complicated dissection of racism in America is inflammatory, but that's kind of the point. Moreover, Spike Lee doesn't enshrine his movie in moral rectitude. He's not here to play by the rules or tow any lines, which is why Chi-Raq is a gaudy, messy, blistering movie. And it's alive. So, so alive. Those who criticize Spike Lee for turning the movie into a farce in the second half are missing the point (and missing a bold and wonderful move of a talented director). The mark of a great movie is that it can hold an array of emotional experiences without losing its footing, without compromising its characters or its values. And moreover, that it takes chances where conventional movies play it safe. Chi-Raq blissfully flies too close to the sun, and what a beautiful flight it is.
by Jacob Lusk @ pannedreview
Email ThisBlogThis!Share to TwitterShare to FacebookShare to Pinterest
Tags 2015, Angela Bassett, Dave Chappelle, Jennifer Hudson, John Cusack, Nick Cannon, Samuel L. Jackson, Spike Lee, Teyonah Parris, Wesley Snipes