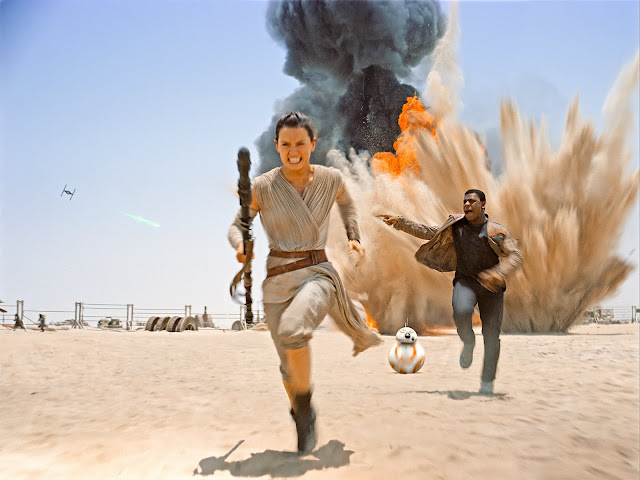 Note: I have made no attempts to conceal spoilers in this review, so read at your own risk.

After the last three films in the Star Wars franchise, The Force Awakens had nowhere to go but up. While all the superfans were still basking in their space opera reverie from opening weekend, I managed to see an afternoon showing of the latest Star Wars. Here’s my history regarding this franchise, in a nutshell: I resisted them until 4th grade because everyone else was so into them; then I really loved them for a few years, until one of my best friends—a Star Wars devotee if ever there was one, who made Star Wars home movies with his brother—scared me straight. I wasn’t going to be that cultish about it. (There were so many other things to be cultish about.) The Force Awakens is a relatively clever and entertaining jaunt into space opera, but it hits all its predictable beats with such self-satisfaction that you know what’s coming before it happens. This is pure nostaglic giddiness on the part of director J.J. Abrams, pure “Look-at-me-getting-to-direct-a-Star-Wars-movie!”

Nostalgia is the wind in the sails of The Force Awakens. J.J. Abrams has genuine affection for these movies, and he deftly adheres to all their idiosyncrasies. Force mirrors Star Wars (as in A New Hope) in a number of ways: it establishes new, young heroes Rey (Daisy Ridley), Finn (John Boyega) and Poe (Oscar Isaac), a new (old) threat in the form of Han and Leia’s corrupted Jedi son Kylo Ren (Adam Driver). And now Luke Skywalker has taken on the Ben Kenobi aura of mystery, having fled civilization in despair. (His attempts to train his nephew backfired, and he feels responsible for Kylo Ren’s conversion to the Dark Side.)

Rey is essentially the new Luke Skywalker, although Finn may sort of share that credit. Rey is a scavenger living on a bleak desert planet called Jakku, where she awaits the return of her family. (It's not quite clear what happened to them.) Her existence is very Mad Max. We see her trading machine parts for food and sitting with watchful yearning (like Luke did in A New Hope) for something better to happen to her. She's pulled into the drama of Star Wars via an adorable droid named BB-8, who's carrying important information regarding Luke Skywalker's whereabouts. (Another mirror-plot checkpoint.)

Let’s remember that the original Star Wars was itself a nostalgia trip, culled by George Lucas from serials he remembered watching on Saturday mornings as a child. That makes The Force Awakens a nostalgia trip within a nostalgia trip; add to that the fact that the kids who grew up on the originals have now lived long enough to spawn their very own Star Wars-loving progeny, and you’ve essentially got third-hand mythology. That was why, about an hour into the movie, I began to pull away from it. The new characters’ stories are compelling, but Abrams cannot fully overcome the ring of familiarity. And he’s too much in love with the series to really want to, try as he might.

There are little moments of humor that really pop, and the performances of the three young leads are winning. Acting has improved so much over the years that they’re leagues ahead of Harrison Ford, Carrie Fisher, and Mark Hamill when they first debuted in 1977. Those three, naturally, return for this new installment, with varying degrees of screen time. (Hamill seemed like a no show for most of the film, but Abrams pays it off smartly at the end.)

J.J. Abrams has a knack for tweaking pop culture iconography into his own re-packaged product. But I’m not sure that qualifies him as a storyteller. It’s perhaps good enough that Abrams is better than George Lucas. But as a director—of movies, particularly—Abrams is erratic. Some of the action (meaning plot development, not merely fight scenes and explosions) is well-structured, like the climactic lightsaber showdown between Rey and Kylo Ren. At other times, Abrams fails to fully set up a scene. When Rey is attacked by some stormtroopers in a marketplace, we see it from afar through the perspective of Finn. The scene doesn't really work unless we're up close, watching Rey's reaction, watching her fend off the stormtroopers, rooting for her. Of course, the purpose of putting it from Finn's perspective is to have him rush to save her, only to get there after Rey has dispensed with her attackers on her own. She doesn't need his help. It's a cool, enlightened moment for a Star Wars movie, and yet the scene doesn't totally work as structured.

Likewise, the dialogue fluctuates in quality. Abrams wisely goes for silence in two key dramatic scenes: when Rey and Leia embrace after the death of Han Solo, and when Rey hands Luke Skywalker his lightsaber at the end. It’s hard to imagine any dialogue that wouldn’t have sounded cheesy in those moments. But in other scenes, the dialogue is laboriously clunky, like a laughably bad moment when Han Solo and Leia discuss their son’s temptation to the dark side, like they’re expounding on the ingredients of a chicken soup recipe. It’s some of the worst dialogue in the movie: utterly lacking in emotional truth, and utterly functional. (Perhaps it’s an ode to George Lucas’s hackneyed dialogue.)

Pauline Kael once said that Star Wars was like a box of Cracker Jacks that was all prizes. J.J. Abrams has adopted a similar storytelling method. He doesn’t have the patience to let the weighty moments in the story be earned. They’re revealed quickly and haphazardly—like when Kylo Ren removes his mask. (Remember it took us three movies to see Darth Vador’s face.) And when the young man kills his father—the beloved Han Solo—it feels both too late and too soon. (Harrison Ford apparently wanted Lucas to kill his character off in Return of the Jedi, but Lucas balked at shooting such a dark ending.) It’s the right choice, but a misplaced one. Perhaps it should have happened in Part Two, but without Solo’s death, The Force Awakens would have no dramatic weight to it.

But despite all my quibbles, I basically enjoyed The Force Awakens, even if I was expecting more from it. It's certainly better than the previous three installments, although that's not saying much, and Abrams has potentially laid the groundwork for a really first-rate middle section just like the original trilogy did with/for Empire Strikes Back. We'll have to wait and see.