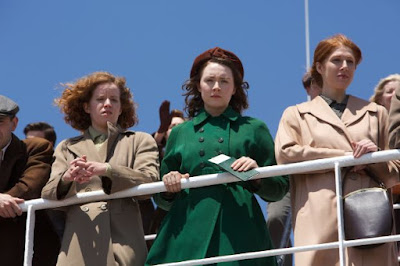 In Brooklyn, actress Saoirse Ronan plays an Irish girl named Eillis (pronounced “Aye-lish”) who leaves her homeland for America. Ronan transforms what might otherwise have been sap into something of real weight. Brooklyn is a lovely movie that achieves real sentiment without being manipulative. And it achieves something else: a deep understanding of a human being, one of the most sympathetic and moving characters I’ve seen in a movie this year. Director John Crowley and screenwriter Nick Hornby (working from the novel by Colm Toibin) have meticulously shaped the emotional journey of this young woman who feels a hard-to-define yearning to move beyond the confines of her provincial world. But the new world she steps into is equally frightening. It’s the gulf of familiarity verses the gulf of the unknown, the placebo of small town ways verses the overstimulation of the big city, the warm glow and the suffocation of family verses the alluring freedom and aching loneliness of independence. Brooklyn holds all of these complexities and dramatizes their effect on Eillis with masterful skill and grace.

In the opening scene, we see Eillis yawning at 7AM mass under the critical eye of her boss Miss Kelley, the prickly woman who runs the local bakery. They go to early mass so they can be prepared for the onslaught of Sunday customers at the shop, who line up for bread as though it were Black Friday. When one customer asks for some shoe polish, Miss Kelley subjects her to a cruel interrogation: “Why did you come for shoe polish today? These people are here for bread for their Sunday dinner. You could have gotten shoe polish yesterday. You needed it yesterday.”

Brooklyn is reminiscent of James Gray’s The Immigrant (my favorite movie of 2014), although the heroine in The Immigrant is far more transgressive than the heroine in Brooklyn. Eillis isn’t forced to do unspeakable things to save a loved one, but she is forced to make the hardest choices of her life, and all on her own. Thus, Eillis is a character we feel for, whether she’s a lonely soul submerged in the throes of homesickness, or a sophisticated young woman buffeted by a new-found confidence and a budding romance (with an Italian sweetheart named Tony, who’s played by Emory Cohen). Saoirse Ronan plays her with dignity and graciousness. She’s a bright woman—something that becomes increasingly apparent as she makes her way in the city—and she’s ever watchful of the people around her. She’s been set up in a boarding house comprised of other young Irish girls like herself, and run by an almost cartoonishly Irish-American woman named Mrs. Kehoe (Julie Walters), who’s quick to excoriate the girls for exhibiting bad manners and “giddiness.” (Her rant about giddiness is pretty terrific.)

Brooklyn’s treatment of the cultural intersection happening in New York in the 20th century is perhaps too rosy. But it’s charming nonetheless. There’s a scene where Eillis learns how to eat Italian food (so that she won’t embarrass herself in front of Tony’s family at dinner); there’s a scene where she and Tony go to Coney Island, prior to which Eillis must obtain a bathing suit. (She looks stunning in her emerald green suit.) We feel pressed up against a window, looking into a somewhat idealized version of the past. But Brooklyn is also an emotionally direct movie, a movie which deftly walks the line between sentiment and syrupiness. It all goes back to our own emotional investment in Eillis. When she’s torn between two lovers (Tony in New York and Jim, played by Domhnall Gleeson, in Ireland), we see the weight of choice and consequences placed on this woman’s shoulders.

Brooklyn at its heart is a straightforward story about a girl figuring out where to plant her feet. But within that story is a deeper, more complicated narrative about women who had to maneuver their futures smartly. The girls at the boarding house attend an Irish social every Friday night. (That’s where Eillis meets Tony; he goes to the dances because he likes Irish girls.) They’re on the market, but one of them, Miss Fontini (Jessica Paré) has been married before. “Would you get married again?” Eillis asks her (she’s contemplating her future with Tony). “Yes, then I wouldn’t have to wait in line to the use bathroom,” Miss Fontini says. There’s a cynical reality that the film accepts, even though it doesn't want to (it wants a happy ending, it wants things to work out for Eillis): Women were lucky if they got married, and luckier if the man they married was nice, and stayed that way.

One of the most moving scenes in the film happens at Christmastime. Eillis has volunteered to help serve a group of elderly homeless men—all of them Irish—and a man sings a beautiful Irish folk song called “Casadh an Tsúgáin”. Someone says to Eillis, “these men built the tunnels and the bridges.” Brooklyn may strive for an upbeat ending, but it holds the darker and sadder pages of this story close to its heart. It’s a rich, heartbreaking, deeply moving film, and I loved it.