'Spotlight' is an unflinching, urgently needed examination of power and abuse in the church. 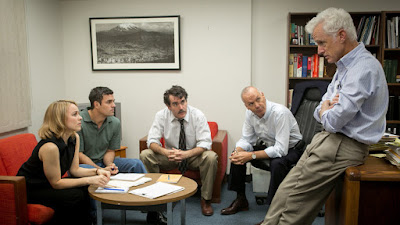 “I thought that some day I would come back to my faith. But something cracked,” says Boston Globe reporter Michael Rezendes, played by Mark Ruffalo in the new film Spotlight. For Rezendes, the truth that the Catholic Church covered up untold cases of abuse perpetrated by clergymen is the wrecking ball that decimates his already derelict faith. When you’re raised Catholic, you’re a Catholic for life, whether you believe in God or not. But to see firsthand the Church covering up its own dark sins is to have the very fabric of your soul ripped from you. It’s gut-wrenching and permanent.

Spotlight is a perceptive, unflinching new look at how the Church's power made an entire city complicit in unthinkable crimes. It’s a compulsively watchable, fascinating yarn in the nature of All the President’s Men, and its focus is as shattering as Watergate, perhaps more so, because it hits you on a deeper, more personal level than All the President's Men. We expect our governments to lie to us, to some extent. But, we have naively trusted the Church to be free of deception for far too long.

The film dramatizes the Boston Globe “Spotlight” team's investigation of the case nearly fifteen years ago. The film is set in 2001, although it opens in 1976, where we see, in hushed voices, somber Church officials begging the mother of an abused child not to say anything against the Church, because the world needs the Church. These "men of God" assure the mother, who's still clinging to this institution as a source of truth, that the pedophile priest will be sent away, that it won’t happen again. But it happened again. And again.

Director Tom McCarthy, who co-wrote the script with Josh Singer, zooms in on the investigation, minimizing the personal lives of the main characters. The “Spotlight” team—Michael Rezendes, Robby Robinson, Sacha Pfeiffer, Ben Bradlee, and Matt Carroll—played by Ruffalo, Michael Keaton, Rachel McAdams, John Slattery, and Brian d’Arcy James—are the heroes of the film, if indeed we can call them heroes. As much as Spotlight ultimately maneuvers itself into a pro-journalism stance, this movie isn’t a shameless plug for journalism. The Globe has to reckon with its own demons: It too is complicit in the cover-up by ignoring the case for years, despite the efforts of victims, now grown up, to contact them.

Michael Keaton, who was admittedly very good in last year’s much flashier Birdman, is exceptionally good here as Robby Robinson, the head of “Spotlight”. The performance isn’t flashy at all, and Keaton’s subtlety has its own kind of dramatic weight and import. What humanizes him, and all the other reporters, is their very personal stake in this investigation. Boston is a Catholic town in many ways; the culture is Catholic just as the culture in the South is Evangelical, and this culture affects you no matter your own personal religious beliefs (or unbeliefs). When Robinson confronts administrators at his alma mater, who don't want to investigate allegations of abuse against a priest-faculty member, he tells them about the man, now in his 40s, who was molested by the priest. He was a hockey player, and the priest was the hockey coach. Robinson glibly observes, "I guess we were just lucky we didn't play hockey." It's the kind of shattering remark that needs to be said.

Even as Spotlight rightly brings down the hammer on the abuses, and gives voice to the abused, the film maintains a refreshing graciousness toward belief. All of the “Spotlight” reporters were raised Catholic, and many of them went to Catholic schools. Spotlight reminds us that belief isn’t necessarily the problem. It is, however, the reason many believers are unable to deal honestly at this institution. It’s the power of moneyed institutions cloaked in religious authority, especially when those moneyed institutions can throw their weight around a city, absconding with evidence that damns them, leaning on people to protect the Church “for the good of the city.” When the Cardinal tells Globe editor Marty Baron (Liev Schreiber), “It’s good for the institutions of the city to work together,” Baron responds, “I think for us to do our job we have to work alone.”

Schreiber, it should be noted, gives a fine performance as the Globe’s editor. Schreiber approaches the Marty Baron character with a kind of laconic humility. Baron is always thinking about the bigger story, and he finds moral purpose in bringing systemic corruption to light. McCarthy establishes Baron, a Jew who had previously worked at papers in Miami and New York, as the necessary outsider who sees through the local politics and the mutual good feelings of Bostonians. It’s his sharp focus that enables him to push the “Spotlight” team further, to root out the heart of the scandal.

Spotlight is also an interesting bit of time travel to the not-so-long ago world before the Internet had totally reshaped journalism, before our current, almost total, transition from print to digital. In this way, we see yet another shard of complexity: The “Spotlight” reporters are tasked with finding stories that will sell. (There’s talk of future job cuts, because even then circulation was diminishing.) McCarthy deftly balances the self-serving nature of journalism (you have to find compelling stories to sell papers) with the moral burden of journalism (people need to hear these stories). It may be the best movie of the year; it nothing else, it's one of the most urgent and perceptive films on religion, the press, and power.