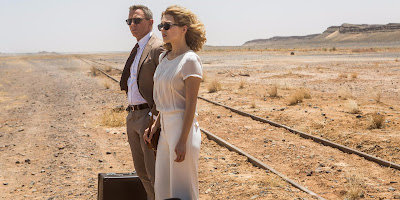 The new James Bond, Spectre, is an enthralling good time, one of the most exciting big movies to come out this year. It has one major flaw: a wrong-headed need to understand and reform its hero; but this I can forgive for a movie as entertaining and well-made as Spectre. Daniel Craig, who has talked recently of exiting the role of 007, has sometimes been criticized for being an overly serious Bond. There is something shell-shocked about Daniel Craig’s appearance: He always looks to me like he’s just returned from a tour of duty in Iraq. But he’s a remarkably fit actor, and he’s subtly funny, cautious never to venture into Roger Moore territory. Craig himself exudes a kind of enigmatic persona that works for the character.

Spectre opens with a sweeping shot of Mexico City on El Dia de los Muertos. We watch a man and a woman—both wearing masks—make their way through a crowded street, into a hotel, to their room, where they embrace. Then the man takes off his mask: It’s James Bond. Bond is always ready for a bedroom scene, if only the lady will wait a moment while he shoots someone. “Excuse me for a moment,” he says, and with sniper rifle in hand, climbs out the window of the hotel room. We follow, looking down on him from above as he maneuvers from rooftop to rooftop until he finds his perch and takes aim.

The scene is visually thrilling, in part because director Sam Mendes cares about craftsmanship, and in part because all this precision and attention to Bond’s spatial geography builds the tension: By the time Bond pulls the trigger, we’re totally invested in what he’s doing. The building that subsequently explodes (not because of the gun shot) would otherwise have been another numbing moment of cinematic destruction. When Bond, unable to escape the debris and the enveloping cloud of smoke and gas, falls down, down, down, he plops right onto a couch. This punctuating bit of humor sealed the deal for me. The rest of the film (until the end) is pure delight.

One of the most interesting parts about Spectre is its fascination with/anxiety about surveillance. Surveillance is the chief bogey of this movie, the thing the villains treasure because it begets them unadulterated power. But it’s also a fact of life, especially in Europe, where counter-terrorism measures have increased the number of cameras in public places, and, we assume, the number of phone conversations being listened-in-on. In the film, the 00 program is threatened by a new intelligence division, headed by Max Denbigh (Andrew Scott), who sees data collection as the wave of the future, and agents like Bond as relics of the past. The movie opens with the text, “THE DEAD ARE ALIVE,” and insinuates that indeed James Bond himself is a kind of ghost who visits us in our pop culture fantasies. Perhaps this explains our fascination with him, and why the current iteration of the series so desperately wants to “solve” James Bond, to know the unknowable.

Sam Mendes seems aware of our culture’s current need to psychoanalyze movie heroes to death. He makes light of this in a scene in which Bond is being evaluated by a shrink (Dr. Madeleine Swann). She doesn’t know that he’s actually there to save her from an assassin. But her questions are the questions we may have found ourselves asking—against our better judgment—over time: We want to know what makes James Bond tick, yet to understand the mystery is to take the fun of the mystery away. Unfortunately, the film can’t resist its own urges to investigate and domesticate its hero. It's a symptom of a larger pop cultural urge, this need to know everything, to fix everything, this inability to accept flaws as somehow fundamental and unchangeable and, sometimes, desirably human.

One of my favorite things about these movies is when they turn into a North By Northwest-style world geography tour. Spectre does not disappoint in this arena: We go from Mexico City to London to Austria to Tangier. Sam Mendes, with help from cinematographer Hoyte van Hoytema, captures the lushness of these disparate venues for the usual James Bond spy-movie hijinks, and lets the camera linger on them enough for us to savor the image. And the chase scenes, which are generally very well-choreographed, have been carefully wrought in conjunction with their locations. Probably the best one is the fight between Bond and Mr. Hinx (Dave Bautista), the great, hulking moose of a henchman who is this movie’s Jaws. Their tussle on a train somewhere near Tangier (if memory serves) is tense and exciting, and again, capped with a bit of throwaway humor (that doesn't work quite as well as one would hope).

As the chief villain, Blofeld, Christoph Waltz is appropriately creepy. Waltz, like Javier Bardem before him, seems made for these kinds of megalomaniacal characters. He reminds me of that great, sinister character actor Henry Gibson. But there’s something too easy about Waltz as a villain. It’s as expected as having Paul Giamatti play a weasel. And though I don’t mean to damn him with faint praise (because Waltz is really great at what he does), there’s so much else to look at and love about Spectre that the villain pales in comparison.

Perhaps the one truly lackluster note in characterization is the Bond girl, played by Léa Seydoux, Dr. Madeleine Swann. Her father was part of the ignominious SPECTRE ring, and now she’s a walking target, whom Bond has vowed to protect. Seydoux is a lovely mousy thing, and even gets to partake in the action during the extensive train fight scene. But James Bond is always more interesting when he’s being sexually one-upped by his female counterpart. Madeleine Swann is too mopey and soft, and in the end, she’s little more than a pawn (in the film’s needless final act). This is where the movie’s project to reform James Bond—by domesticating him—seems particularly idiotic. I’m not necessarily in favor of the more disposable Bond women; I just prefer Bond girls who hold their own. When Bond looks at the disarmed Blofeld at the very end and says, “I have something more important to do [than killing you],” I laughed at what until now would have been a bad sexual pun in a Bond movie. Now it’s a thesis defending Bond’s new stance on marriage as he walks off into the night with his uncharismatic lover. (He and Seydoux do generate some heat, however brief: When they engage in a passionate kiss, earlier in the film, Daniel Craig’s lips take on a life of their own.)

I thought Dr. Swann held her own, like in the scene in L'American where she tells James, "Make a move on me and I'll kill you," or whatever. I also like how she handled a gun.

As a side note, the train scene was like From Russia with Love mashed together with Casino Royale. It was nice work.

She's really not a bad character. Just not my favorite type of Bond gal.