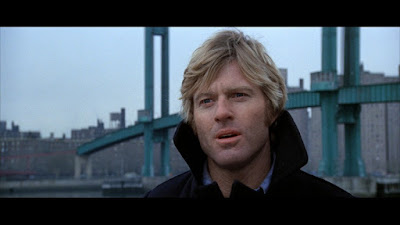 Three Days of the Condor, which was directed by Sidney Pollack, has at least one thing going for it: Robert Redford. Redford in his day was a terrific hippie-everyman. He was conservative enough in his demeanor to be mainstream, but progressive in his politics. But Redford loses some of his appeal when he starts to fancy himself a martyr for whatever cause his movies are about. In Three Days of the Condor, it's Robert Redford against the world, and it's a bit hard to take. I like him better when he's charming the world into compliance.

Condor begins well: Pollack is a slick filmmaker, and the modern-jazz-funk score by Dave Grusin works for the opening shots, sounding more than a bit like the music by Weather Report from the same period. The film is set in New York, where a reader at the American Literary Historical Society named Joe Turner (Redford) is terrified to discover all of his colleagues have been gunned down while he was out to lunch. Turner pretty quickly realises that he missed death only by sheer coincidence, and that the party responsible (the CIA) isn't likely to make the same mistake twice. Soon he's hiding out in the Brooklyn Heights apartment of an icy photographer named Kathy, who's played by Faye Dunaway.

Pauline Kael criticized the casting of Dunaway as a mistake, but I'm not sure it's the casting so much as the character herself. There's a heady sort of macho intuition in the script that bungles the movie irretrievably: Turner, who's holding the terrified woman at gunpoint, looks around at her many pictures (all of them dreary black-and-white photos of autumnal trees and empty park benches: death and isolation and such) and basically pronounces her a frigid bitch. Where on earth does he get off? What's most distressing about this is that within twenty minutes of all this, they're in bed together. So I can't really fault Dunaway for what is decidedly silly writing.

Movies are supposed to be improbable, unlikely concoctions of fantasy, but this shacking up with your hostage business smacks of an improbability that only weakens the movie. Now that Kathy is on Joe's side (a new kind of putting the screws on your audience), she agrees to help him rough up a CIA desk jockey so he can find out what's really going on behind closed doors. It's depressing to realize that Dunaway had to settle for such a flat role, especially since she was one of the reigning queens of 70s cinema for a little while. 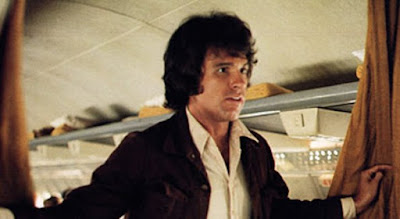 Meanwhile, Alan J. Pakula's The Parallax View (released a year earlier, in 1974), is equally muddled. Warren Beatty plays a reporter who witnesses the assassination of a politician in the Space Needle. Within a few years, six people who witnessed the murder have died mysteriously, and a frantic reporter (Paula Prentiss) turns to Beatty for help because she's convinced she'll be next.

Pakula doesn't have much facility for directing action sequences. In one case, Beatty's character deflects a gunshut with a fishing rod--by wrapping the wire around the would-be shooter's legs. It's a clumsily staged moment. Pakula's better thrillers--Klute and All the President's Men--didn't have scenes like this. He's better at transmuting static material than translating physical action to the screen.

Beatty's character, also named Joe, is a prototype for the smart-ass investigative reporter that Chevy Chase played so well in Fletch. Beatty doesn't exhibit contempt for his audience, but he does imbue Joe with a certain degree of hardness to the world. He doesn't seem particularly affected by any of the disturbing things he uncovers, particularly the strange mission of the ominous Parallax Corporation, which is apparently in the business of training assassins. If only it were as clever and interesting as The Manchurian Candidate. Instead, it's a rather obvious attempt to throw some doubt on the Warren Commission's investigation of JFK's assassination.

Of course, all of these movies are inherently connected to the Nixon Whitehouse. Without Nixon (and Vietnam), we wouldn't have likely had such an interesting spate of paranoia thrillers. (The best of them, aside from All the President's Men, are less obvious, like Philip Kaufman's terrific remake of Invasion of the Body Snatchers.) But has any other President spawned a whole sub-genre? These films are carriers of a Nixonian spirit that is quite unsettling and altogether fascinating. The fact that the movies themselves don't really hold up doesn't negate their relevance in the culture, because they're ultimately more interesting as reactionary objects, put forth to question authority.

The most successful movie to directly address Nixon may be, surprisingly, a kooky little Hal Ashby comedy called Shampoo, which also stars Warren Beatty. I remember watching it on television many years ago. But seeing a movie divided into segments by commercial breaks (and edited for cable) is no way to live. Shampoo is about an anomaly: a straight hairdresser who services unhappy rich women in Hollywood. (And he services them in more ways than one.) His name is George, and it's been suggested that he was inspired by Jay Sebring, the man who revolutionized men's hairstyles before being butchered by the Manson family at Sharon Tate's house in August 1969.

Shampoo is glib but sweet, and director Hal Ashby manages to make a film about unhappiness and moral decay without turning moralistic. George is bedding both the wife and the mistress of a big money businessman (Jack Warden) from whom he's hoping to finance his own salon. The ladies are both unhappy, but unwilling to forgo the various pleasures afforded by George's services. (The wife, Felicia, is played by Lee Grant, and the mistress, Jackie, is played by Julie Christie.) Meanwhile, George's official girlfriend, Jill (played by the sunny, wide-eyed Goldie Hawn, who's a willowy flower with a spark of fire inside her), is equally muddled and dissatisfied with her boyfriend.

Warren Beatty looks perpetually stoned in Shampoo. (He looks more lucid in The Parallax View.) This is the right look for his character, a man who concludes that he's basically happy--even despite his career failings--because he gets to sleep with a lot of women. We feel for George, genuinely, when he's left alone at the end, a consequence of prior indecision.

Shampoo is set during Election Day and Night 1968, and at the end, we see actual footage of Nixon making his victory speech. It's easy to see how he won in `68--a slick and skilled politician playing against someone his own age, Hubert Humphrey--despite a blistering loss in 1960 to the suave John Kennedy. Shampoo thus signals the death knell of the Peace and Love Moment. It was, after all, Nixon and Manson who signaled it.