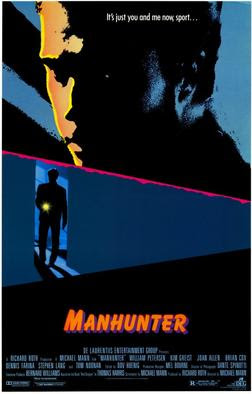 Based on the Thomas Harris novel Red Dragon, Manhunter (1986) has a lush veneer but nothing underneath it. The film follows a detective named Will Graham (William Petersen) as he tracks a serial killer nicknamed the Tooth Fairy (Tom Noonan) with the help of incarcerated murderer Dr. Hannibal Lecktor (Brian Cox). Manhunter looks cool: Michael Mann has an eye for framing a scene, and he’s adept at using lighting and modern architecture to full effect. But there’s something soulless about his films. When Brian De Palma gives in to his urges for heavy stylization, we profit by it: De Palma’s best thrillers are fun to watch, and there’s some kind of pathos amidst the swirling camera and garish colors. Michael Mann has learned the skills of filmmaking without any particular understanding of how to make us care. So the best I can say about Manhunter is that I admired the craftsmanship and liked the music—a synthsezied score by Michel Rubini and The Reds. The protagonist is supposed to be a skillful detective because he can get into the heads of the killers, which put him over the edge before. But somehow, the emotional weight of that never affects us. Petersen gives a good performance (he looks like he was lifted from Miami Vice), and so does Dennis Farina as his superior, who drags him back into investigative work after a much-needed sabbatical. With Kim Greist, Joan Allen, and Stephen Lang.
by Jacob Lusk @ pannedreview
Email ThisBlogThis!Share to TwitterShare to FacebookShare to Pinterest
Tags 1986, Brian Cox, Dennis Farina, Joan Allen, Kim Greist, Michael Mann, William Petersen