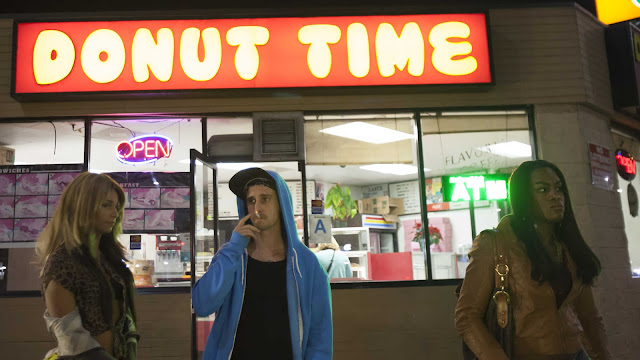 Tangerine follows two Los Angeles prostitutes—who happen to be transgender—as they traverse the sun-baked sidewalks of their L.A., the L.A. that reminds me a lot of Orlando: It’s a concrete jungle of endless traffic and punishing heat. It's a city of exhaust fumes and sweat and blood and a kind of grittiness that would give John Waters' Baltimore a run for its money. Tangerine brings new meaning to the word “earthy.” It is audacious and unpredictable and unkempt, because it takes place in a world of impoverished people, the kind of people that we don’t often think about when we think about Hollywood. This movie is unapologetic in its brashness, and the performances by Kitana Kiki Rodriguez and Mya Taylor, two diamonds in the rough if ever there were any, seem to have been plucked from the world of reality television.

In fact, Tangerine retains the sensibility of reality TV too. It thrives on drama and outrageousness, and these ladies thrive on it too. They are very much the embodiment of the stereotypical drag queen, from their pointed exaggeration of femininity to their intense emotional responses, which have the explosive power of dynamite in a coal mine. Etiquette is for the privileged, and these ladies, whose names are Sin-Dee and Alexandria, are barely hanging on. They don’t have time to be nice, their lives are too hardscrabble for them to value the veneer of decorum that people with money—and their own transportation— take for granted.

So when Sin-Dee, just out of jail, learns that her boyfriend has been cheating on her (with a lady who was born a lady), she becomes obsessed with tracking the girl down. Alexandria accompanies her, but insists that she will not partake in any drama, as though she could avoid it. Sin-Dee tracks down the "bitch" (a word whose meaning is delightfully fluid in this movie), named Dinah, at a makeshift bordello run inside a dank-looking motel room. To call it sleazy would be too kind, because this motel exhausts the parameters of sleaze. Sin-Dee kicks in the door as if the motel belongs to her ("You forget, I got a dick too!" she later preens to a stingy trick, before beating him up, and it's this same triumphant self-possession with which she breaks into the motel room). She proceeds to drag Dinah kicking and screaming across town to confront Chester, a drug dealer who does his business at Donut Time, on an iPhone. The Donut Time confrontation becomes complicated by Alexandria's own disappointment (she's been promoting a little show of hers that almost no one attends) and the arrival of an Armenian trick named Razmik (Karren Karagulian), who's married but secretly yearns for the trans women.

Incidentally, Tangerine was shot entirely on an iPhone 5S with the help of a handy anamorphic lens. This gimmick, if indeed it can be called a gimmick and not simply a harbinger of the future, allows director Sean S. Baker to keep our noses up against the glass of his sideshow. We’re encouraged to tap on the glass, but there’s no guarantee that we won’t get bitten. That’s what makes Tangerine stand out, what makes it not just a novelty picture that happens to incorporate two trendy topics—trans people and modern technology's complete intrusion (or integration) into our lives. This movie feels delightfully transgressive, and simultaneously like watching your trashiest relatives fighting at a family reunion after too many beers.

There's something utterly tangible about this movie experience, as sensory as the Odor-rama cards that theater-goers received at the premier of John Waters' film Polyester in 1981. But there's no tangible object for us to scratch and smell. It's more ingrained. Tangerine is so attuned to filth that we feel it, we smell it. Sin-Dee is told to pop a Tic Tac (by Dinah, who looks like she hasn’t seen a hot bath in days, and who is forced to parade around L.A. with only one flip flop). Afterward, every time Sin-Dee screams in someone's face, it's hard not to imagine the stench of bad breath. Later, two would-be tricks douse Sin-Dee with urine, and we see Alexandria wiping her down with a wet paper towel. (This moment comes after a huge fight between the girls, and it deepens their friendship and our emotional identification with them.)

Of course, it’s a disgusting and degrading moment for Sin-Dee, but she gets over it quickly. She’s accustomed to a certain degree of griminess that comes with being on the street, with having to walk everywhere in the hot sun, with doing business in sweaty cars with sweaty dudes. Baker plays it not as tragedy, but as one more notch in her belt, one more thing that Sin-Dee has had to survive. What's so surprising is how much this movie stays with you, and how much the friendship between these two endears itself to you long after the movie is over. The title sums up the movie: It's tart, sweet, messy, and refreshing.
by Jacob Lusk @ pannedreview
Email ThisBlogThis!Share to TwitterShare to FacebookShare to Pinterest
Tags 2015