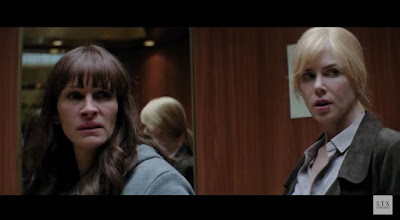 As depressing as it is to see an actress like the ebullient Julia Roberts transformed into a droopy-faced, grief-stricken shell, her new movie, Secret in Their Eyes is pretty entertaining. In fact, she's sort of the female equivalent to one of those characters played by Liam Neeson of late (in films such as Taken and Non-Stop). Roberts plays a Los Angeles detective whose daughter is murdered. By a cruel coincidence, Roberts and her partner, played by Chiwetel Ejiofor (12 Years a Slave) are the detectives called to investigate the crime scene, never suspecting the identity of the victim. The film jumps back and forth between 2002, during the immediate investigation of the murder, and the present day, after the case has gone cold.

Secret in Their Eyes isn’t by any means a perfect thriller. And it’s hard to say if anything you’ll see in this grim procedural drama will differ much from any number of investigation-themed television dramas like Criminal Minds. But the yarn it unspools is compelling enough, and the film is bolstered by the performances of its three leads, especially Nicole Kidman as the district attorney who’s caught between her obligation to follow the law and her devotion to her friend and colleague.

Secret in Their Eyes is in essence a revenge fantasy. As a culture, we've been primed for this kind of movie based on our incessant consumption of true crime TV. We're constantly fascinated by stories of murder and the devastation wrought on the victims' family members. We yearn for justice, yet we know that not even execution of the killer will bring back the dead. Revenge fantasies are deceptive, because they're a heightened version of a longing that cannot be fulfilled. Writer-director Billy Ray understands the double-edged nature of revenge, but he's also happy to milk the fantasy all the way to the bank.

One of the most intriguing aspects of this movie is the role of the September 11th attacks in halting the investigation. The prime suspect in the case is a valued informant, who’s been feeding info to counter-terrorism detectives about a local mosque, a hub for suspected terrorists. The film tries to delve into a surprisingly complex moral problem: Is it morally right to keep a killer on the streets if doing so can prevent more deaths? (I'm not sure the movie satisfactorily answered this question; but it gets points for asking.)

Billy Ray favors convenient plotting, so every scene is primed for maximum plot juice, like an overripe orange. Ray likes his pulp extra-pulpy, and so we get such dramatic wallops as Julia Roberts sobbing over the dead body of her daughter, inside a dumpster; or the ongoing plot complication of a conflicted crush between Ejiofor and Kidman, who’s married; or scenes of Roberts, now hardened by her grief, contemplating a little vigilante justice. “My daughter was the thing that made me me.” This logic is unhealthy, and what’s more, I think it is a truthful observation about too many parents. Of course, the loss of a child is a tragedy that probably no one can recover from fully, but the idea that your kids define you is troubling nonetheless.

Nicole Kidman stands out in her controlled, commanding performance as the D.A. In a scene in which she chides her colleague (Ejiofor) for badgering a suspect despite having no sufficient evidence against him, she goads the suspect into angrily striking out at her. It’s a masterful bit of manipulation, and a reminder of Nicole Kidman’s particular brand of deceptive power. She’s seductive and the smartest person in the room. (But it's also decidedly sexist, because she insults his manhood, hoping it will anger him. When it does, he whips out his member in an act of pure brutishness. Earlier, though, Kidman congratulates Ejiofor on his gender sensitivity.)

Julia Roberts is very good—she has always had an earthy quality that’s made her someone you can root for under any circumstances—but this character feels like a downer in light of her repertoire. It would be like seeing Cary Grant play the creepy pedophile Humbert Humbert in Lolita. We love Cary Grant for being Cary Grant, and we love Julia Roberts for being Julia Roberts. There’s a little bit of that Julia Roberts here, but not much. And even though it feels wrong-headed to criticize an actress for doing something different, especially if she's proficient at it, I always wonder about the motivations of taking on such a role. Are we as a culture so dead to the Julia Roberts of Pretty Woman and Erin Brockovich (a great performance)? Will we turn Julia Roberts into an angry sociopath as we have done Liam Neeson, who went from saving thousands of Jews during the Holocaust to becoming a taciturn, rich man's Rambo?

But all of these quibbles don't undercut the fact that I had a good time at this movie. Secret in Their Eyes has surprising moments of humor and some well-staged moments of suspense, even if it’s an essentially dumb and emotionally manipulative experience. But the dumpster scene gave me chills; but I also felt irritated by it. Which kind of cinematic manipulation is acceptable, and which crosses a line? I’m not sure myself.