Ridley Scott’s pop space adventure “The Martian” has the heart that all of his previous films were missing. 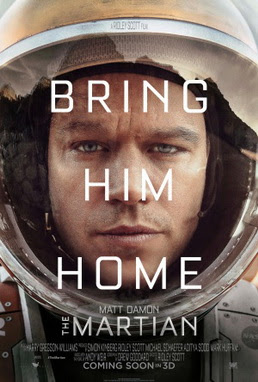 As much as I love Alien, I’m not much of a Ridley Scott devotee. Blade Runner has put me to sleep at least twice, and many of Scott’s other films are cold and clinical, which Alien kind of is too (only somehow, with Alien, it works). That’s why I was so pleasantly surprised by The Martian, Scott’s follow-up to his enormously self-plagiarizing Prometheus (2012). With The Martian, Ridley Scott seems to have stepped into an invigorating ray of sunshine that’s loosened him up as a director. This movie is a crowd-pleasing space epic in the best sense, with an irresistible performance by Matt Damon, our current cinematic Everyman.

Normally, this kind of movie bores me to tears. But Ridley Scott and Drew Goddard deftly weave together two exciting, suspenseful narratives: one of the lone astronaut, the other of the NASA scientists and PR people back on Earth, who initially believe Mark is dead, but who soon discover photographer evidence to the contrary. Their rush to build a payload of supplies—to send to Mark so he can subsist while the rescue team comes—is yet another opportunity to show us the brilliance of science and the processes of scientists. This movie is essentially a plug for the scientific method and the apparently boundless possibilities of science.

There have been several pro-NASA movies of late, and several noteworthy space thrillers too. This year, the uneven comedy-drama Aloha (from director Cameron Crowe) lamented the death of NASA and used that historical moment to craft a darker narrative about space exploration falling into the hands of greedy private enterprisers. Last year, there was Christopher Nolan’s high-minded space opera Interstellar (also featuring Matt Damon), which was a humorless and fatty cinematic experience that tried to out-Stanley Kubrick Stanley Kubrick’s 2001: A Space Odyssey. Before that we had Alfonso Cuarón’s magnificent but stressful (and overly sentimental) Gravity. Between the three of them, The Martian achieves the most balance: it’s emotionally affecting without resorting to cheap dramatic tricks, and its obvious admiration for NASA and science as a methodology does not inhibit our enjoyment of the film. It also takes itself less seriously without sacrificing the sense of galactic and human awe it evokes.

Matt Damon, of course, is the heart and soul of The Martian. When he faces the reality of his situation and the likelihood of his death, he takes a sober breath and simply utters, “So, yeah…Yeah,” and with those simple words, and with Damon's look of utter acceptance-cum-vulnerability, we experience the weight of mortality. There are few actors working right now more capable of winning us over than Matt Damon, and Ridley Scott understands this. He lets Damon do the work of pulling us into the film’s emotional journey, and it’s this which anchors The Martian to firm ground, narratively speaking. Even when the film begins to grow a little wearisome (I would have liked it to be 20 minutes shorter), we’re still ultimately with this movie and willing to be taken for its ride.

Scott has also assembled a fine supporting cast, most of them playing astronauts or scientists: Jessica Chastain, giving a surprisingly warm performance (for her) as the captain of the Mars mission that inadvertently abandoned Mark; Jeff Daniels as the head of NASA, managing to be glib, tactical, and likable all at once; Kristen Wiig as NASA’s public relations analyst, proving once again that Kristen Wiig is a tremendously engaging performer capable of both comedy and drama: she has some lovely, funny little moments, and conveys exasperation quite effectively; Michael Peña as the pilot of the spaceship Hermes: he exudes the charm of a good-natured ex-military pilot; Chiwetel Ejiofor (best known for his performance in 12 Years a Slave) as Vincent Kapoor, one of the NASA heads trying to manage both an impossible rescue mission and a public relations nightmare.

The film looks gorgeous, I should add. Mars never looked so beautiful in all its orange-red dusty glory, although the movie doesn’t focus as much on the sheer grandeur of space as it might have. It’s far more interested with practical things, but in a way that keeps us hooked to the screen (mostly). And even though I can appreciate arty space movies like 2001 and Alien, there’s something befitting the more practical, humanistic touch with which Ridley Scott imbues The Martian. This is a populist space movie, an almost sap-headed love letter to the idea of can-do spirit and human achievement. But Scott is a competent director, so The Martian successfully walks the lines of sentimentality and histrionics. It’s immensely satisfying entertainment.