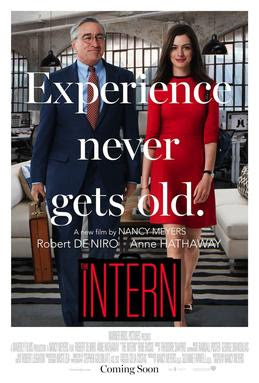 The Intern opens and closes with Robert De Niro doing Yoga, as if writer-director Nancy Myers dreamed up this image first, and then wrote a whole script around it. The Intern is destined to be a hit with the over-50 crowd, and while the film doesn’t pander to them quite as much as I thought it would, it is at times astonishingly dull. But it hits all the right beats of its ready-made formula, and after the movie’s two meandering hours have finally passed, viewers may feel that the quantity has given them their money’s worth, even if the quality is bland and overly expository.

Here’s the set-up: Robert De Niro plays Ben, a retired ad exec who applies for a senior internship (meaning an internship for senior citizens) at an up-and-coming online apparel outlet, founded and operated by a frantic, driven, smart young woman named Jules Ostin (Anne Hathaway). Jules is a modern woman: She started this company only a year-and-a-half ago, and it’s grown to 200 employees and booming business. Her husband (played by Anders Holm) is a stay-at-home dad. (With his patchy manscaping, Holm looks like a boy who’s donned a thick prop beard to play dress-up in.) Jules is so under-developed that we have no idea she’s married (or has a child) for the first half-hour of the film. (This could be a poorly conceived attempt to show us that Jules is working too hard and therefore her family is invisible to her.) Ben becomes Jules’s assistant, and we watch as he gradually wins her over with his wise gentlemanly ways. There are the expected jokes about the clash between young and old, but even though this movie doesn’t hit them too too hard, it smacks of staleness. There’s even a scene in which Hathaway helps De Niro set up his Facebook account. Will this even matter in ten years, assuming Facebook goes the way of Myspace by then?

Nancy Myers, a veteran writer-director, has not shaped The Intern into anything sharp or alive. The movie lumbers along, and we’re all waiting to get to the part where De Niro and Hathaway become friends. We want to see them interact. Nancy Myers wants this too, but she makes us wait nearly an hour as Jules goes through the motions of resisting Ben. We all know what’s going to happen, so this device does nothing for the film but pad the running time.

De Niro rarely rises above his abysmal fate playing a friendly, wise, oddly progressive Grandpa-Santa Claus-type, doling out obvious life advice—like telling his youthful co-workers they should tuck their shirts in. De Niro is likable, but he smiles his way through the film, like some big dumb grinning cartoon character, with no sense of direction. The movie desperately wants him not to be the crotchety hard-ass he played in Meet the Parents, but it swings so far in the other direction that he becomes passive. Anne Hathaway gets to be funnier and more defined, but by the time we arrived at those moments in the second half of the film, my patience had worn thin.

For all its attempts at clever commentary on the cultural divide between young and old people, The Intern isn’t very funny. Nancy Myers gets so caught up in grinding us through the formula of her story that she forgets to make it amusing. She relies entirely on her actors’ individual charisma and charm, like when Adam Devine (one of the goofy young employees, who’s like Speedy Gonzalez with his delightful maniacal ridiculousness) is rapping in the getaway car while De Niro and two others break into Jules’s mother’s house to delete a nasty email Jules accidentally sent to her mom. De Niro has been coaching Devine’s character about how to interact with women, and gives him more obvious advice: A text message is not a suitable venue for an apology. Adam Devine could make me laugh in almost anything, though, so his presence here comes as a relief.

Perhaps the biggest crime The Intern commits is its wasting of Rene Russo, who plays the company’s in-house massage therapist. She and De Niro’s character strike up a romance pretty quickly, but the film barely pursues it. We get one brief scene of them talking about their former spouses and their lives, and that’s it. The rest of the time, Russo’s character is either coming or going, saying things like “I’m just on my way to work.” (A far cry from the delicious part she had in last year’s Nightcrawler.)
You’d think Myers would have been drawn into this relationship, that she’d have wanted to develop it more fully. Perhaps her characters are so dull, so pat, and so predictable, that the only direction it can go is banal perfection.

That’s the real problem with The Intern: It essentially argues that old people have figured everything out, and along the way, it robs them of any interesting qualities. The young people in The Intern have all the problems, and the old people are there to solve them—or else get in the way with their cartoonish ineptness, like one of the other senior interns does when she attempts to serve as Hathaway’s chauffeur. This movie is the cinematic equivalent to all those shame-inducing think pieces dumping on the “millennial” generation by espousing the inherent superiority of the baby boomers. Myers hasn’t developed her thinking very much in the last thirty years. In fact, she was more honest in 1987’s Baby Boom.

Anne Hathaway is the reason to see this picture, if at all. Her performance as Jules Ostin is terrific. It’s a pretty standard Hathaway part: driven, smart, plucky, tough, and just a tad prickly. Obviously, De Niro’s character exists only to smooth over her rough edges. But the film finds itself in a quandary when [spoiler alert] Jules discovers her husband [spoiler] is cheating on her. There’s a lot of talk that Jules is somehow guilty for her husband’s cheating ways, because she’s too focused on work. But De Niro discourages this self-doubt, and reminds her that it’s okay to be a woman with ambitions. Somehow, this felt like a characterological flaw. De Niro’s Ben isn’t so much a human being as a Frankenstein-concoction: the ideal man,  created by a politically progressive but cinematically conventional filmmaker. And as much as The Intern tries to be progressively feminist, it settles for a treacly happy ending, one that cheats its convictions.