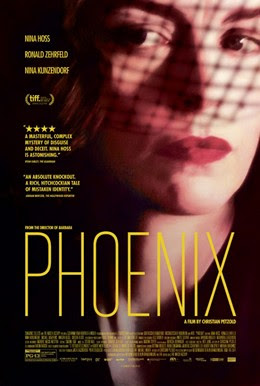 As well-trod a subject as the Holocaust is for filmmakers, director Christian Petzhold has tapped into a new well of sorts with Phoenix, a slow-moving but brilliantly constructed and haunting film set in post-war Berlin. Nina Hoss plays Nelly, a young woman who miraculously survived Auschwitz. (We’re informed that everyone else in her immediate family is dead.) The film opens as Nelly is being transported back to Berlin by her old friend Lene (Nina Kunzendorf). Nelly’s faced is masked with red-stained gauze, and when the women are stopped at a checkpoint by some gruff American soldiers, one of them demands that she remove the gauze so he can see her face. She does, and although we do not see the damage, the film makes it clear that Nelly’s face has been completely mangled by a gunshot wound.

Phoenix asks the question, “Is your face your identity?” When a plastic surgeon asks Nelly what movie star’s resemblance she would like when he reconstructs her face, she balks at the idea and bemusedly asks for him to restore her own likeness to her. But the plastic surgeon insists that this is more difficult, nay impossible, and that a new face is just the thing she’ll want. Why would she want to be recognized anyway, given the state of things in Europe right now? But this is merely the surface of this haunting film: Christian Petzhold (who co-wrote the screenplay with Harun Farocki) undertakes a fascinating exploration of the nature of identity, of the fact that surviving German Jews encountered a shattering identity crisis when they returned to the rubble of their former homes in Berlin.

Petzhold masterfully weaves important, seemingly small details into the film, all of them building to an astonishing crescendo. Before her imprisonment, Nelly was a singer, and her husband, Johnny, a goyim who had been trying to hide her from the Nazis, was a piano player. The plot of Phoenix involves Nelly tracking down her husband (Ronald Zehrfeld, who looks like a German Jeremy Renner), who doesn’t recognize her because of the plastic surgery. However, before Nelly can reveal her true identity, Johnny asks her to pose as his wife, since she reminds him of her, so that he can collect her inheritance, which he’s willing to split with her for her trouble.

“I no longer exist,” Nelly says early in the film. She wanders through bombed streets piled with broken bricks and dust, and catches her fractured reflection in shards of glass. Johnny’s proposition entices her strangely, perhaps because it’s like starting over again. What unfolds is a kind of tragic Pygmalion story, or a re-fetishized Vertigo, wherein the man recreates the woman for financial gain rather than sexual pleasure. For whatever reason, Nelly goes along with it, delays telling Johnny the truth, and makes cosmetic changes—donning her old clothes, dying her hair—to more closely resemble her former self. And all along, Johnny refuses to believe that the real Nelly is right there in front of him. Perhaps he’s denying his own deep suspicions, or maybe Nelly’s death is so necessary for his schemes that he cannot configure a reality in which Nelly has actually returned.

Nelly’s willingness to go along with Johnny’s plan disturbs her friend Lene, who insists that Johnny betrayed her, and later uncovers proof of this. Lene is indeed overcome with feelings of betrayal, both personally and ethnically, and she’s become attuned to it, to detecting the manipulative and self-serving designs of other people. She’s likewise attuned to the ways vulnerable people participate in their own abuse. Lene says, and I’m paraphrasing, “We fought for them (in World War I) and this is how they repay us; and now they welcome us back as though nothing happened.” Lene’s feeling of dejection, of displacement, gets at the deeper questions about identity that World War II unearthed, questions that make Phoenix such a rich viewing experience. It also may be the first movie to really depict just how desperate Jews were to establish their own home—Palestine—as a refuge from a Continent which had consumed them.

Phoenix is absolutely worth seeking out, and probably more than once, because it has one of the most mind-blowing finales I’ve seen in a long time. Even if you become a little impatient with the movie as it builds and builds slowly but meticulously (it’s easy to distrust a filmmaker when you’re not sure where he’s going), that last moment makes everything worthwhile as all the little details suddenly congeal into the piercing, unforgettable payoff. The film’s emotional impact is devastating and thrilling at the same time. I sat glued to the screen, suddenly and totally under director Christian Petzhold’s spell. The whole time, Nelly seems powerless, but at the last minute, she turns the tables on everyone, and that little detail—that Nelly used to be a singer—suddenly moves to the foreground of Petzhold’s narrative. It’s a knockout of a movie; but it requires a little patience.
by Jacob Lusk @ pannedreview
Email ThisBlogThis!Share to TwitterShare to FacebookShare to Pinterest
Tags 2015, Christian Petzhold, Nina Hoss, Nina Kunzendorf, Ronald Zehrfeld