When Blythe Danner sings, everyone listens. 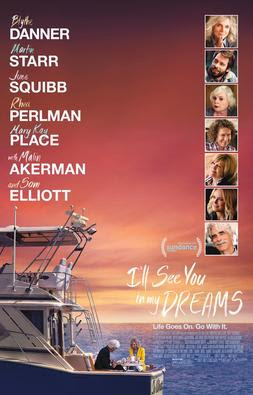 When Blythe Danner sings “Cry Me a River,” she takes control of the screen. Her character has suddenly taken on new depth and emotional clarity: We see the woman she was united with the woman she is. The film, I’ll See You in My Dreams, is a plum role for an actress that’s never had her due. Danner gives a wonderful, understated performance, and director Brett Haley seems like he’s actually interested in developing the inner-lives and the relationships of his characters. Unlike Nancy Myers’ The Intern, I’ll See You in My Dreams treats the over-55 crowd as human beings of depth, flawed and hopeful and interesting. It’s surprising to realize that the younger director has crafted the more intelligent movie about relationships between different age groups.

What do you do with yourself when all the important events in your life have already happened to you? That’s the dilemma facing Carol Petersen, a woman in her 60s who feels lost, aimless as she faces the routine of being retired, of being in a cycle of life that feels somehow useless and detached from everyone else. Carol is a retired school teacher. Before that, she was the singer in a band. She’s been widowed for twenty years, her daughter is grown up and living across the country, and she lives alone with her dog.

I watched I’ll See You in My Dreams about a month ago, but never found time to write a review of it. I remember sitting at my computer balling as Carol is forced to put her beloved dog to sleep. Maybe I had just had a particularly bad day, but the film struck a chord with me. It runs the risk of being dismissed as “sweet” or “light,” but this faint praise undercuts the fact that I’ll See You in My Dreams has emotional weight to it, and it presents its main characters with emotional depth—a feat that the more recent The Intern failed to accomplish.

I’ll See You in My Dreams is at times refreshingly unpredictable. Carol meets two men at roughly the same period, and two distinct, dynamic relationships develop. One of them, Lloyd (Martin Starr), a banal 30-year-old man who cleans her pool, becomes her friend. Their affinity for each other is strangely lovely, perhaps because we tend to live such splintered lives, shutting out people who aren’t carbon copies of ourselves. The other relationship—a budding romance with Sam Elliott—also travels in unexpected directions, all of them adding new layers to Danner’s characterization. Elliott's charming, carefree attitude proves to be life-changing for Carol.

The one element of I’ll See You in My Dreams that feels the most calculated is Carol’s group of rambunctious girlfriends, all of them fellow retirees, living at a posh seniors community. Those scenes reminded me a little bit of the 2005 film In Her Shoes, when Cameron Diaz visits her grandmother, played by Shirley MacLaine, at one of those retirement homes where all the old people are hooking up with each other. (The speed dating scene is admittedly funny in a horrific sort of way.) It's funny, but it feels a little bit like the movie's cheap hook. And yet, the portrayal is not unrealistic. The girlfriends—played by Rhea Perlman, Mary Kay Place, and June Squibb—are funny, too, but they’re used much in the same way Betty White has been in the last five years: as old women saying inappropriate things. When The Golden Girls did it, it worked because they were fully realized characters and they could deliver the one-liners with verve. But these characters aren’t as well drawn as the others.

This is, incidentally, Blythe Danner’s first starring role. Readers may recognize her as the mother in the Meet the Parents franchise or as Will Truman’s mother on Will & Grace, or as Gwyneth Paltow’s mother in real life. Danner always lends a touch of class to a production, but rarely does she get to be the center of attention herself. Brett Haley lets her fill the room. And she’s not a particularly showy actress. Even when her character performs that lovely little number at a karaoke bar, she’s never ostentatious, never a camp queen. Danner cares deeply about the humanity of this woman, and this in turn makes us care deeply for her.

With Malin Akerman as Carol’s daughter. Written by Haley and Marc Basch.