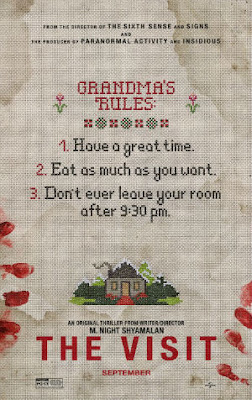 When a director pleasantly surprises me—especially one I’m not particularly fond of—it restores my faith in the whole movie-going experience. M. Night Shyamalan’s The Visit is a movie that deserves to be seen, especially by people—like me—who have written this director off over the years, often with good reason. Although I had some problems with the film, I quite enjoyed much of it, and this may be one of the few times that a Shyamalan plot twist, once revealed, won’t detract from a second viewing. More importantly, this movie is alive and funny and freakishly weird. Shyamalan’s much celebrated 1999 debut The Sixth Sense oozes a kind of grim solemnity that feels antithetical to the horror genre; with The Visit, Shyamalan has loosened up. He deftly offsets the film’s ultimately disturbing tale with humor that feels delightfully inappropriate, like laughing in church; it’s both a reprieve from the film’s darker elements and a kind of manipulation, a veil between us and certain horrific realities present within The Visit.

The Visit is about Rebecca and Tyler, a brother and sister played by Olivia DeJonge and Ed Oxenbould, who go to spend a week with their grandparents, whom they’ve never met. Their mother (played by the vibrant, funny Kathryn Hahn) was a rebellious kid, and she stormed out of her parents' lives fifteen years ago and never looked back. And even though she hasn't yet made up with them, she's sending her kids off to their farmhouse for the week, perhaps with the hope that a reconciliation will present itself as a result.

One of the film’s potentially distracting gimmicks is that it’s shot as a documentary: Rebecca is a burgeoning filmmaker, and she has decided to turn their week into a movie project, enlisting the help of goofy, surprisingly insightful, Tyler, who’s a natural ham with a penchant for improvising silly, amusing little rap songs. (Rebecca, incidentally, uses film jargon constantly, and while this may have seemed like a cute way to portray her as precocious and driven, sometimes it just feels a little grating. But her character is bigger than just this one foible, and DeJonge gives a lovely performance of depth.)

But Shyamalan uses this gimmick to his advantage: We feel immersed in the inner-lives of these two kids, who are some of the best written child characters I've seen in movies in a long time. DeJonge and Oxenbould are the heart and soul of The Visit, as well as the dog and pony show; it's their quasi-Abbott and Costello routine which endears us to the film, and maybe protects us from what could very well have been a nasty, unpleasant experience. The documentary aspect is always frustrating at some point, such as when a dangerous situation demands that a character put down the damn camera. But even this irritation subsides in light of the overall movie experience, which is mostly thrilling and just creepy enough.

[SEMBLANCE OF SPOILERS IN THIS PARAGRAPH]

I’ve never been overly concerned with figuring out plot twists in movies. I always feel a little embarrassed—and like a bad movie-goer—when someone says, “Oh, I figured that ending out right away.” I rarely even try to guess. That being said, I have, like everyone, been conditioned to expect some big reveal in an M. Night Shyamalan movie, and have mostly been disappointed with them (as with 2004’s The Village). It’s difficult not to feel the wheels turning around in your head with these movies, and I eventually guessed (correctly) that there was something suspicious about the fact that these kids had never seen their grandparents’ faces before, and that they were meeting them without their mother present. Add to that the knowledge that Grandma and Grandpa volunteer as counselors for a mental institution, and you can start to figure out what’s really happened.

Playing the grandparents, Deanna Dunagan and Peter McRobbie are perfectly cast: their faces were unfamiliar to me--which I think worked to their advantage--and they’re polished actors, capable of blending their characters’ awkward homespun kindliness with the increasing dosage of macabre weirdness. We soon realize that something is oh so not right with Grandma and Grandpa. At first they just seem like quiet, sweet, simple country folk. (I kept expecting them to be part of a cult.) Grandpa works their isolated, peaceful farm, Grandma toils away in the kitchen making all kinds of bad-good foods: cheddar biscuits, cookies, pies. And you know, she occasionally asks Rebecca to clean the oven from inside it.

The children become increasingly concerned with their grandparents’ strange behavior at night, too, like when they spot Grandma frantically pacing the house like a madwoman, or violently throwing up on the kitchen floor, or repetitively scratching at the walls. But there’s always some “reasonable” explanation, and ultimately the running joke becomes, “that’s just how old people are. They’re different from you and me.”

The Visit hilariously examines our tacit fears of aging and the elderly, which play themselves out in a certain casual dismissal of them. We don’t want to think about the fact that our bodies and minds will start to fail us some day, or how these failings will affect our independence and our privacy. Interacting with the elderly reminds us where we’re headed, and this scares many of us. And how many of us have rolled our eyes at an elderly grandparent going on and on about health problems that are often way too descriptive?

The Visit exposes something urgent and strange and, even, funny in our culture: We may actually think of older people as monsters. If we believe in the concept of the Normal—that there are certain kinds of bodies that are “normal” and any bodies which deviate from these set norms are therefore “abnormal”—we then have to define what normal is, and we ultimately come to a definition excludes the elderly. Normal, traditionally, includes full use of the body and the mind, general good health, and some measure of physical beauty, intellectual sharpness, a sense of humor, and economic success. According to The Visit, when bodies violate this sense of normalcy, the result is terror.

What’s so great about The Visit is that none of these fascinating ideas overtake the sheer nutso exuberance of the film. The movie works as a purely entertaining shocker and as a comedy, as a wonderfully developed study of two children and the way they view the world, and as a battle between old and young. It’s difficult to believe this is an M. Night Shyamalan picture, because it’s such a delightful freakout of a movie.
by Jacob Lusk @ pannedreview
Email ThisBlogThis!Share to TwitterShare to FacebookShare to Pinterest
Tags 2015, Deanna Dunagan, Ed Oxenbould, Kathryn Hahn, M. Night Shyamalan, Olivia DeJonge, Peter McRobbie