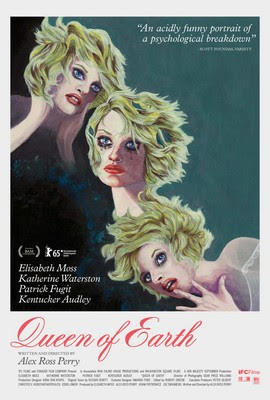 As a woman on the verge of a nervous breakdown, Elizabeth Moss channels Catherine Deneuve’s character in Repulsion, that unsettling 1965 psychological horror film from Roman Polanski. Moss, playing a woman who’s recently been dumped by her boyfriend, stars in Queen of Earth, the latest concoction from writer-director Alex Ross Perry. Moss and her co-star Katherine Waterston play best friends Katherine and Virginia. Katharine (the character, not the actress) has not only suffered the traumatic end of a romance, but also the painful loss of her father, a celebrated artist who battled severe depression. (And what's more, Katherine lives in the shadow of his reputation as an artist, accused of being the product of nepotism than an actual talent herself.) Virginia has enticed Katherine to her family’s lake house—which is apparently an annual trip for the two of them—ostensibly to help her best friend grieve in peace and maybe just find a way to breathe.

Alex Ross Perry points his camera directly at Moss (or, occasionally, the other actors) most of the time, and zooms in. Her face becomes the canvass for his story of psychological crisis. It’s good that Moss is such an expressive actor, a woman who is absolutely in touch with herself, with her emotions, and has a real command of that canvass. Her wide eyes, her running eye-liner, her lips seemingly inflated by the bubblegum-pink lipstick that she sloppily applied without regard to coloring between the lines, all of these cosmetic and exterior details show us a person at an emotional and psychological crossroads.

What’s perhaps more disturbing, however, than watching a woman go mad (which would seem exploitive on its own), is the way Queen of Earth smartly depicts the power play at the heart of the friendship between Katherine and Virginia. We see flashbacks of the previous summer trip to the lake house, when Virginia was going through her own painful breakup, and when things were pretty much okay for Katherine, who had that year brought along her then-boyfriend, stifling any chance for a good girl-time session between friends. Now, in the current year, Virginia has returned the favor so-to-speak, inviting a local beau named Rich (Patrick Fugit) over all the time, using him to feel superior to Katherine. It helps a lot that Rich likes getting under Katherine’s skin, and Virginia, although she doesn’t want to admit it, is starting to lose faith in her friendship with Katharine. Secretly, she’s already done, but she can’t quite admit it to herself, and, moreover, she’s still bristling from Katherine’s own abuse of their friendship the year before. Like Nancy Allen's character in the 1976 Carrie biting her lip just before dumping the pig's blood on the bemused Carrie, Virginia wants to enact some pain. She's just not as honest or openly depraved about it.

This is a film about getting even while still displaying a smile and a few looks of concern. And the thing is, neither Katherine nor Virginia is the villain of Queen of Earth. The real villain is the lies we tell ourselves, or our own very human need to be with other people, to find validation of ourselves in others, that sets us up not simply for disappointment, but for the throes of despair, once the people we love have failed us, lied to us, used us, rejected us, laughed at us. It’s all there: in every relationship there is love and hate, truth and deception, friend and foe.

While Queen of Earth will surely be a hard sell for some—it’s a tough movie to sit through even at 90 minutes, because there’s nothing pleasurable about what it wants to show us—it does showcase some strong performances, and even though I don’t think I ever need to sit through this movie again, I appreciate what it’s trying to say about relationships. Katherine is very much a Shirley Jackson kind of character. Shirley Jackson, who wrote such novels as The Haunting of Hill House and We Have Always Lived in the Castle, was adept at entering into the then-mostly-uncharted minds of young women who lived in secrets (the mid-20th century in American lit celebrated the liberated male, not the imprisoned female just trying to understand herself).

In a Shirley Jackson story, there's almost always a woman who's shut off from the rest of the world, usually because of the hostility that world holds for her. Like Eleanor Vance in Hill House, Katherine has come to an isolated place to find something, and it's there that a kind of haunted inner-struggle wages on and burns itself into our minds as we watch. But Jackson, I think, did it better: Her fiction manages to be both true and compelling, where Queen of Earth is often just true.

As powerful as Elizabeth Moss’s performance is, and as fascinating a study of her breakdown as Alex Ross Perry has created, the movie feels somewhat lifeless. This may be the point: Katherine’s been drained of a kind of vitality. Something about Queen of Earth feels incomplete. It's as though we've never quite been given a risen to care about this character, as sympathetic as she seems. Perhaps it would have worked better as a kind of What Ever Happened to Baby Jane? experience. Perry has put Katherine up on the screen like a camp goddess and then made it impossible for us to laugh.
by Jacob Lusk @ pannedreview
Email ThisBlogThis!Share to TwitterShare to FacebookShare to Pinterest
Tags 2015, Alex Ross Perry, Elizabeth Moss, Katherine Waterston, Patrick Fugit