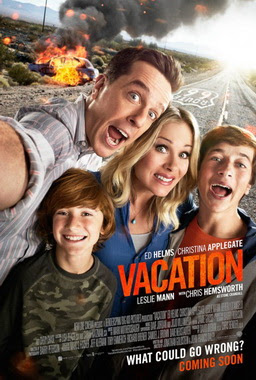 Does the world really need another Vacation movie? Apparently, Jonathan Goldstein and John Francis Daley, the writing-directing team of the latest film in the franchise, aren’t too sure. Their own apathy about the project, and their own disdain for just about every character in the movie, saps the energy out of this lackluster comedy. It’s the worst kind of dude-bro humor, operating at about a grade-7-level. Is there anything more tiresome than a gag in which commercial pilot Rusty Griswold (son of Clark), played by Ed Helms, accidentally gropes the breasts of a passenger on his plane when he’s taken off balance by some turbulence at the hands of his senile co-pilot? If that wasn’t bad enough, Rusty falls face forward into the crotch of the woman’s young son. More turbulence. This is in the opening five minutes, and it’s a grim warning of the deadening unfunniness to come.

More disturbing, however, is the thread of creepy pedophilia jokes that runs through the movie. The crotch scene is the first of a running tally, and I’m not exactly sure for whom these jokes were intended to be funny. When I was a kid, all my parents had to shield me from was sex and violence between adults. Now, when the kiddos inevitably tune into the 2015 Vacation, someone will have to explain to them what a pedophile is, because Rusty tries to explain the word to his own son, before Mom steps in and silences her bumbling husband.

Don't get me wrong. I enjoy dirty humor when it's done right. It’s just that this particular brand of dirty humor, not to mention the uninspired way the filmmakers push it on us, doesn’t work. It’s not clever, it’s not funny, it’s not even good enough for European Vacation, which everyone agreed was the worst Vacation movie, although there may be a contender against that title now.

Early in the film, when Rusty informs his wife Debbie (Christina Applegate, who was just about the only performer I truly liked and engaged with in this movie) and his two sons, James (Skyler Gisondo) and Kevin (Steele Stebbins) that they’re going to drive across the country to Wally World (the same ill-fated trek his father made in the 1983 Vacation), the movie takes a self-referential turn. “It’ll be just like the original vacation!” their father declares, adopting that same wide-eyed glee that Chevy Chase got in his eyes when he was more into his plans than the rest of his family. “I’ve never heard of the original vacation,” replies Kevin, a real demon-child who’s constantly beating up on his passive older brother. “This one’s exactly the same, except the first one had a boy and a girl, and we have two boys.” I wasn’t sure exactly how to take this scene, except it felt like an accidental admission that nobody knows what to do to make this movie good. Simply being tied to a beloved comedy franchise is presumably enough to ride on for 100 minutes. (I must admit, I grew up watching Vacation and Christmas Vacation as a child, and I loved them both for quite a long time. And anyone who loves those movies will at least be happy to hear the cheesy Lindsey Buckingham tune "Holiday Road" wash over the opening credits, which feature lots of stupid family road trip photos.)

The scenes with Leslie Mann (as Rusty’s sister Audrey) and her husband Stone (Chris Hemsworth, who’s the epitome of the conservative Texan, and who parades his considerable package in front of his brother- and sister-in-law) are kind of funny. But Goldstein and Daley don’t know how to use Leslie Mann, who is one of the funniest actresses working in comedy movies right now. Both Mann and Chris Hemsworth, who’s incredibly likable and go-along, deserved more screen time. They hold our attention far more than Ed Helms, who's not nearly as charismatic.

And of course, no Vacation would be complete without an appearance from Clark and Ellen Griswold (Chevy Chase and the wonderful Beverly D’Angelo, who was often the saving grace of the other movies in the franchise.) Some readers may not know this because so many crappy comedies are written by men who don’t know what to do with brilliantly talented actresses, but Beverly D’Angelo can sing. Yes. She once played Patsy Cline in Coal Miners Daughter. She has a beautiful singing voice and terrific comic timing to boot, which makes her virtually silent role in this movie all the more disheartening.

Christina Applegate takes over for Beverly D'Angelo as a reason not to completely hate these movies. She's a trooper, and the movie tries to give her character a crazy side which unfortunately ends up backfiring because it unleashes the movie's misguided contempt for her. Rusty, despite Debbie’s wishes, makes a detour at her old university, where she gets sucked into a sorority drinking game that involves downing a pitcher of beer and then completing an obstacle course. Applegate vomits repeatedly before being pummeled and thrown to the ground, where she lays face-down in her own frothy upchuck. Such dignity.

As for the kids, I wanted to squash the little brother Kevin. Skyler Gisondo is sort of likable as James, the budding writer who would rather wander the West like Jack Kerouac than go to a “corporate theme park.” There's not much complexity to either one of these boys: the older brother is totally likable and the younger brother is a monstrous little shit. When James finally does put an end to Kevin's abuse, it's underwhelming, although admittedly in character, to see him lightly slap his brother, who's disturbed by the weirdness of it. James's method works, though. And moreover, the movie hates him just as much as his little brother. But it's more proof that the makers of Vacation secretly despise their own characters. You'll be glad when the journey is over.