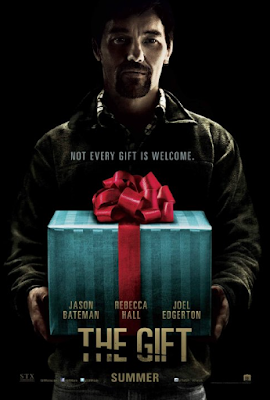 I didn’t have time to write a formal review of The Gift, so here are just a few thoughts about this movie a week or so after seeing it.

First off, Rebecca Hall’s performance—as Robyn, the wife of businessman Jason Bateman, who herself owns a design company—is the heart and soul of The Gift. I’ve been wanting to see Hall break through for some time now, and while I’m not sure this will be achieved with The Gift, it’s gratifying to see such a talented actress in such a big role. Hall’s quiet, compassionate demeanor disarms you, because she’s also incredibly strong and smart. She uses all of these qualities to great effect here.

The film itself, which was written and directed by Joel Edgerton, who co-stars, is masterful in its use of silence and the cumulative effect of creepy little things. If you’ve seen the trailers, you’ll likely be expecting a bromance version of Fatal Attraction. (Edgerton’s interview on NPR’s Fresh Air gives a little more of the plot away.) But the movie happily departs from any predictable outcomes, and offers something far more surprising, if a little too didactic.

The disappointment of The Gift is, as a friend put it, the movie’s lack of “oomph.” It’s so deliberately paced and so good at being subtle, that it deserves a whopper of an ending, and the finale feels like it might have been tacked on by someone from the Lifetime studios. Edgerton’s ability to shift the audience’s allegiance is pretty amazing, though, and I still highly recommend this movie as one of the better creepy thrillers of late.
by Jacob Lusk @ pannedreview
Email ThisBlogThis!Share to TwitterShare to FacebookShare to Pinterest
Tags 2015, Jason Bateman, Joel Edgerton, Rebecca Hall