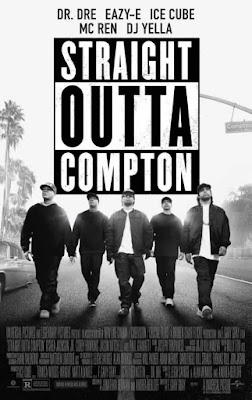 Like so many biopics of late, Straight Outta Compton ignores the complexity of the issues it raises in order to posture an agenda. If you don’t know anything about legendary hip hop group NWA, you’ll likely be taken for a ride by the film Straight Outta Compton, which paints those men in a disturbingly flattering light. This is an instance where a movie should have put the credits at the beginning, not the end, so that we’d see who produced it: Dr. Dre and Ice Cube. Their film, directed by F. Gary Gray, shows how Dre, Cube, Easy E, M.C. Ren, and D.J. Yella took the music world by storm with their incendiary, indignant music. I'm not taking issue with their music or their indignation. The movie nails the racial injustice—aggressive white L.A. cops who frequently trounced young black men in Compton and flagrantly ignored their rights—that spurred NWA to write songs like “Fuck the Police". But the movie doesn’t want to acknowledge any of the flaws of its heroes, such as their rampant misogyny and homophobia, although it’s pretty easy to see the former for ourselves in this film, because women are rarely not referred to as “bitches” and are valued almost exclusively for their sex appeal.

Instead of portraying its heroes honestly, warts and all, Straight Outta Compton revels in their status upgrades and the windfall of money that these guys made as their music became increasingly successful. (NWA's very real and justifiable righteous anger would not have been squelched by a more honest portrait of their own foibles.)

As money is the most important theme in Straight Outta Compton, Paul Giamatti, playing music producer Jerry Heller, who helped put NWA’s music on the map, ultimately becomes the film’s sleaziest villain, once it’s discovered that he’s been dishonest about their finances. What’s perhaps more distressing is that he presents himself as a forward-thinking man who’s willing to stand up to the white police (although there is one black police officer in this scene, and the film doesn't have to do anything to point out the particular tension that conjures up) when these cops illegally accost the guys as they’re standing outside a recording studio. Jerry shouts back at the ignorantly authoritative cops, and it's clear that he only gets away with this retaliation because he’s white. But Jerry’s commitment to racial equality is merely a façade, and he uses the trust of the NWA boys, not to mention their own ignorance of the legalize of the business world, to take advantage of them.

The moments when Ice Cube, Dr. Dre, and Easy E discover they've been cheated out of money are treated like the most important revelations of the movie. The love of money becomes a good unto itself, and these characters’ motivations are tainted by that. This is a film which raises some urgently needed questions right now, but whose focus gets shifted by other things, so that the filmmakers lose sight of what made NWA's music relevant. Who cares if you stand up to racist authorities if in the end your only goal is to become rich and famous, as protected and unconcerned about injustices as your oppressors?

What’s disappointing about Straight Outta Compton as a film is that there are many terrific individual scenes. The film thrives on direct and emotionally charged scenes that grab us and refuse to let go. But Compton wants too much to enshrine its heroes, as though it were Selma, without ever earning that right--the way Selma does. And Ava Duvernay, the director of Selma, acknowledges Martin Luther King’s flaws. Her film doesn’t portray King as perfect. You could walk out of Compton thinking that these guys were totally innocent, that they had never really mistreated anyone. They were just having fun. What's with the secrecy? Anyone can find out what they really think about "bitches" by just listening to one of their songs.

As for the age-old criticism that rap isn't art, the movie at least gives us a taste of the sheer artistic genius behind the best that NWA created over the years. The movie doesn’t really want to talk about art, though, except in very brief moments, like when a police officer scoffs at the idea, rejecting rap as something far inferior to any other form of expression. When you listen to the lyrics of a song like "Fuck the Police", you hear the smart, skillful use of language, the unabated anger and frustration being channeled, and you see how much this particular piece tapped into an ire that wasn’t being seen or heard by anyone. Segregation hasn't gone away even in 2015, and this movie effectively reminds people like me—white, middle-class people—that our skin color has protected us from the kind of treatment people experienced in places like Compton.

The only we way that movies like Straight Outta Compton can really effect positive change is if they’re honest, and we cannot denounce racism while tacitly tolerating misogyny. What’s disturbing is the idea that someone could enjoy a film like this and be proud of his enlightened appreciation for the race problem, while never admitting the filmmakers’ lies about their treatment of women.  Recently, Dr. Dre publicly apologized for his treatment of women, but to what effect? And why did he let a movie like this ignore that same mistreatment? Movies shouldn’t ignore the complexity of their characters all in the name of stirring up the viewers' moral outrage, and they shouldn’t be tidied up in order to package themselves as something morally pure.

Nevertheless, there are moments of greatness and electricity in Straight Outta Compton that make it worth seeing. (It runs on far too long, however, and loses its edge in the final half-hour.) The key performances in this film—Ice Cube’s actual son O’Shea Jackson as Ice Cube, Corey Hawkins as Dr. Dre, and Jason Mitchell as Easy E—are all strong. The screenplay--by Jonathan Herman and Andrea Berloff--is often funny and incisive. But it's disappointing to think that the filmmakers squandered an opportunity in order to worship these rappers as both model citizens fighting for justice, and dutiful capitalists, courageously looking after their bank accounts. It's hard to be counter-culture when you sell out.
by Jacob Lusk @ pannedreview
Email ThisBlogThis!Share to TwitterShare to FacebookShare to Pinterest
Tags 2015, Corey Hawkins, Jason Mitchell, O'Shea Jackson, Paul Giamatti