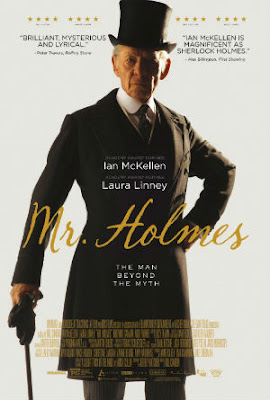 In Mr. Holmes, Ian McKellen takes what might otherwise have been a very superficial piece of anglophilia and elevates it to the level of something deeply moving. McKellen plays Sherlock Holmes, now in his early 90s and living in voluntary exile at his cottage in Sussex, perhaps the only time he’s ever lived away from the whirling metropolis of London, where he made his reputation as the world’s greatest detective.

The film, which is based on Mitch Cullin’s book A Slight Trick of the Mind, follows several threads of Holmes’s life: the present, which involves his relationship with frumpy housekeeper Laura Linney and her adorable, adoring son Roger, played by Milo Parker, who tempers a fiery curiosity about life with a kind of rural English cuteness. With features that completely fill his smallish V-shaped head, he looks like a child-version of Dominic Cooper.

The film also goes back in time to two separate adventures of Sherlock Holmes, one involving a recent trip to Japan ostensibly to find a plant called prickly ash, which is reputably a remedy for arthritis and memory loss. (Holmes is becoming more and more forgetful, and when his doctor suggests that he begin tallying in a journal the number of times he forgets things each day, the still-sharp detective quips, “And what if I forget to mark them?”) The final thread involves a case in which Holmes trailed a grieving young woman who—almost like the obsessed Madeleine in Vertigo—is entranced by the glass harmonica. Her husband thinks that her musician-tutor has gotten her into the dark arts.

Somehow, director Bill Condon has taken something that should have been cheap sentiment mixed with bad literary nostalgia and turned it into a beautifully layered study of aging, of friendship, of regret, of solitude, of all the tensions that we face sooner or later in life. Roger, the boy, becomes enamored of Holmes, and their budding friendship invigorates him and motivates Holmes to finish writing the narrative of the case of the entranced woman, even though he cannot remember how the case turned out. He’s haunted by a sense of guilt to which he cannot attribute a source.

There’s a wonderful scene between the three of them, Holmes, Linney and Parker, in which the boy sharply insults his mother, of whom he’s clearly ashamed. “She can barely read!” he scolds, appealing to Holmes’s hyper-intelligence. Holmes’s reaction is powerful. He looks like he’d just witnessed an avalanche, and in a sense he has. That moment, each actor holds his or her own, even young Parker, who makes quite an impression. There are a number of complex feelings circulating through the room in that scene, and Condon (with the help, I’m sure, of screenwriter Jeffrey Hatcher) handles them with precision.

The movie doesn’t try to neatly resolve emotions that have calcified over many years of time. It unpacks these heavy emotions and treats them with their due respect. And yet, the film doesn’t bog you down with its own weight. It's a very strong movie, but it's also refreshingly airy. McKellen’s beautifully wistful and spry performance, the anchor of this film to be sure, is measured enough to offer equal shares of pathos, levity, and light. I was disappointed that Laura Linney had such a dismal role, but even she vests her character with a kind of stoic dignity. She’s from the lower-class but her son is smart, and this relationship establishes an interesting tension. Holmes remarks with characteristic bluntness, “Often times exceptional people come from unremarkable parents.” It’s really not meant to insult, and perhaps only an actor like McKellen can get away with it. He’s far too likable for a comment like that to give much offense. And at the end of the film, when the boy’s health is endangered, Holmes's genuine, deep compassion and sorrow is powerful. It pierces the mother’s bitterness like a lance.

One of the most remarkable elements of Mr. Holmes is the film’s attention to sensory detail. It's a movie that feels wholly in touch with its environment and with the objects that populate it, from things found in a house or a bookstore or on a train to things growing in the grass. (I couldn't help but notice the thick billowing smoke as it frothed out of the trains; and I was delighted by the rocky beaches and the frothy waters of the sea, where Holmes and Roger swim in a scene near the end of the movie.) Holmes has become a beekeeper in his old age, and this proves a source of fascination for young Roger, who learns to care for the bees himself. The honey harvested by the bees, we learn, is yet another of Holmes’s attempts to cure his senility.

There are plenty of shots of the beautiful countryside too. It’s almost too perfectly, gorgeously English to live. You suspect they're overdoing it on purpose, and yet it’s hard not to be awed by the gorgeous, lush landscapes and the charming quaintness of the cottage and all the silver and furniture and leather books and trinkets: Holmes's old pen, dipped in oily-black ink; the faded white glove--worn by the entranced woman--hidden in Watson's old desk; the old magnifying glass, the mail wrapped in brown parcel paper. All of these little things offer captivating little worlds of their own, adding to the texture of Mr. Holmes, and making it feel earthy and lived-in. I hope I'm not overstating my case here. It's just kind of miraculous to see a movie like this in the summer.
by Jacob Lusk @ pannedreview
Email ThisBlogThis!Share to TwitterShare to FacebookShare to Pinterest
Tags 2015, Bill Condon, Ian McKellen, Laura Linney, Milo Parker