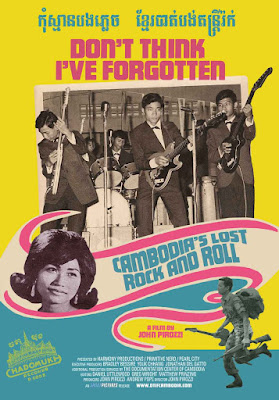 As the world collapsed around them, they made music. In the 1950s and 60s, Phnom Penh, the capital city and cultural nucleus of Cambodia, witnessed a rush of exuberant artistic expression and cultural freedom in the wake of a new push toward modernization. But in 1970, amidst the turmoil of the Vietnam war, neutral Cambodia was transformed into a war zone, eventually leading to its own civil war and subsequent takeover by the Khmer Rouge. Those musicians who had united Cambodians were being silenced, unless they were willing to create fascist art, which is hardly worth the trouble. This is the subject of director John Pirozzi’s heartbreaking new documentary, Don’t Think I’ve Forgotten. It’s perhaps the most culturally significant music documentary of the last few years, along with 20 Feet From Stardom.

If you’re like me, you probably don’t know very much about Cambodia. Perhaps you had a vague notion that Cambodia was somehow involved in the Vietnam War. You probably had heard the term “the killing fields,” but maybe you were fuzzy on where exactly those “fields” were, and who was doing the killing, and whom they were doing it to. Don’t Think I’ve Forgotten fills in some of those historical and geographical gaps for those of us who are woefully uninitiated, and paints a vivid portrait of a country’s relentless spirit amidst its tragic oppression.

It is also a compelling treatise on the inherent value of art.

We in the West live in such a different world, one where self-expression is a measure of social value, a moral right, and where access to all kinds of artistic expression is virtually unlimited. At the same time, we are fighting our own battles over the arts, as anyone who teaches anything in the humanities can attest. There’s a disconnect about art in this country that is the product of our unmitigated progress and prosperity. We’re so accustomed to its availability that we, rather predictably, take it for granted. And yet, art is tremendously undervalued in this country. We’ve forgotten why it is so vital to the health of a society. Our education about the arts is partly to blame. And I don’t mean our education in the classroom, but the more important self-education that is, I believe, a duty and a privilege of a free citizen. We ought to be, independently of the classroom or any other institution or person, reading literature, listening to music, watching movies, and not merely as mindless consumers, but as human beings passionately invested in the world around them, past, present, and future, and the people that populate it. A society is never far from its own self-destruction when it devalues artistic expression, whether this devaluing happens at the bottom or at the top. The people of Cambodia saw the tragic consequences of this in the 1970s.

Like so many countries in Asia, modern Cambodia is the product of Western colonization, having been a French colony until the 1950s when it achieved independence in a friendly (according to the film) change of power. The Cambodian citizens in the documentary spoke what appeared to be a kind of localized French mixed with their own native tongue. The music we hear in the film—covering a period from the early 1950s to the 1970s—combines traditional Cambodian sounds with a style that is distinctly Western: some French but mostly American. The twangy electric guitars echo the glimmery-warm surf rock of the 60s. But there’s also an Afro-Cuban influence at play. And the vocals, the vocals. So sharp, so clear, almost shrill, often childlike in tone, but also rich in texture and ultimately, evocative. The songs are more often than not laments, especially as the wars outside Cambodia threatened to spill over, pulling the neutral country in conflict.

The lyrics are almost comically direct, although I wasn’t sure how much of this was an effect of their translation into English. One line: “Stop asking about your father; he was a womanizer and an embarrassment.” Another, this one a product of the enforced patriotism of the Khmer Rouge: “Don’t be afraid to kill… Pick up a weapon now.” It sounds like a line from one of Charles Manson’s hippie-murder-ballads. And although many of the lyrics feel clumsily obvious, they still find some room for metaphors, with one song comparing a lover to a full moon or a clear sky.

What was most heartening about this movie experience for me personally was the woman sitting next to me, who hummed/sang along with every single song we heard in the movie, who recognized all of the famous Cambodian pop stars and bands chronicled, who laughed uproariously at certain moments that were sometimes lost on the rest of us, who periodically “tsked” as the film dug deeper into the dark pages of Cambodia’s recent history. Sitting next to this woman made the movie come alive for me. I felt, although I do not know, that she had lived this experience somehow, and her responses were almost as powerful, and certainly as moving, as the film itself.
by Jacob Lusk @ pannedreview
Email ThisBlogThis!Share to TwitterShare to FacebookShare to Pinterest
Tags 2015