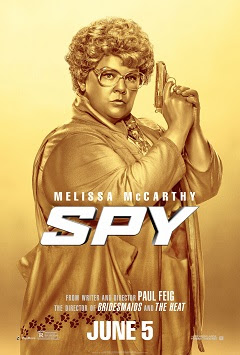 Four years ago, Melissa McCarthy hit the stratosphere playing the unexpectedly wise misfit Megan in Paul Feig’s Bridesmaids. But the resulting McCarthy vehicles have been largely disappointing until now. The Heat was funny, but totally misshapen, like putting the camera in front of a drunk person at a bar. Letting McCarthy lose it for ten minutes can indeed deliver laughs, but they’re cheap laughs that reduce her to a very limiting kind of crazy-lady “performance.” And the result of this direction has been pretty dismal. (See Identity Thief and Tammy.) Now Paul Feig has returned as director and given us Spy, which is structurally the strongest Melissa McCarthy vehicle thus far. Spy is clever and inventive in ways that her previous films were not, and, happily, this movie lets its star be competent and self-aware. It was so hard to give a damn about Tammy when she was such a heartless moron (quite a needless, even cruel combination for any character). It’s much easier and much more fun to rally for McCarthy’s character in Spy: Susan Cooper, the CIA desk jockey who secretly pines for a more exciting career.

Cooper plays the virtual wingman to Jude Law’s character, an agent who gets to do all the fun stuff, like infiltrate nuclear arms transactions in Bulgaria. Jude Law feels like perfect casting here: he has a corrupted charmingness about him; you always expect him to be angling for himself even when he’s mostly a good guy. Even as she sits at a computer screen watching Jude Law’s back (“there’s a guy coming down the stairs; there’s three of them coming toward you down the hallway”), Susan Cooper is in command and good at what she does. In terms of characterization, this movie has done a complete 180, because now almost everyone but McCarthy is totally inept. The CIA office is infested with rats, and we keep seeing the little rodents scurrying around the cubicles and climbing up on employees’ shoulders. While Susan repeatedly saves her agent from actual gunshots and bomb explosions, her colleagues sare shooting the shit around the water cooler three feet away from her desk.

But let’s skip ahead, to where McCarthy is unexpectedly pulled into some exciting field work in Paris. She finally gets to be a legit spy, and that’s where the movie gets interesting. Feig’s script actually bothers to surprise us, which is itself a refreshing delight in a world where comedies are too content with mediocrity. Feig stops short of making this Naked Gun 44¼, but he clearly has an affection both for spy movies and spoofs of spy movies. (The opening titles could actually be mistaken for a Bond film; and Spy isn’t afraid to let someone fall flat on his ass for a joke.) I was also surprised by how many people actually get killed in Spy, which is something many comedies are afraid to do, instead taking the Looney Toons “extreme-violence-will-only-temporarily-hurt-you” tack most of the time. But the characters in Spy get beat up and bruised and make fools of themselves and occasionally die.

McCarthy, however, takes everything on her chin, and as her character gets deeper into the film’s loosey-goosey espionage plot, she gets tougher and more comically aggressive. Feig has finally mastered the balancing act of controlling McCarthy while allowing her to pop off just enough to leave us in fits of hysterics. And she’s surrounded by a wonderful ensemble cast, all of whom have been given full characters to play. Jason Statham is particularly appealing as the comically badass agent who’s not nearly as skilled as he thinks he is. Miranda Hart, who may be unfamiliar to American viewers but who has made a name for herself in British television, is a delight as Susan’s co-worker and best friend. When the movie slows and down gives us little bursts of conversation between these two performers, it feels like a gift. McCarthy finally has a full, rich (ish) character to play, and Hart and McCarthy bring out the best in each other. (I did wish that there could have been a little more shaping to their friendship; it doesn’t get quite as deep as it could. But it’s a start.)

And then there’s Rose Byrne. What can I say about Rose Byrne? I am so happy that she is making movies. Byrne is beautiful and glamorous and smart and funny, and it’s always a pleasure when Hollywood actresses get to be all of those things at once. Here she plays the villain, a spoiled, rich Bulgarian woman named Rayna Boyanov who alone knows the location of some nuclear weapon. (It’s the kind of unimportant spy-movie-nonsense that you have to have in these movies.) It’s not evident in the film’s theatrical trailer, but Byrne and McCarthy spend much of the film playing off each other, and their chemistry pops when McCarthy turns up the volume on her aggressiveness, matching Byrne's terrific mean-girl-with-nukes bitchiness.

The best thing about Spy is its shaping. Feig has written an actual story with actual jokes and characters that feel full of life. These qualities allow the humor to grow organically out of the story; it doesn’t feel like someone is just pointing the camera at insanity and hoping for the best. Sometimes that works, sometimes it doesn’t. I’m always grateful when filmmakers take the time to create funny situations and then let their actors breathe life into them. Spy has vitality and spark to it. You have fun with these people who seem like they’re having fun too.