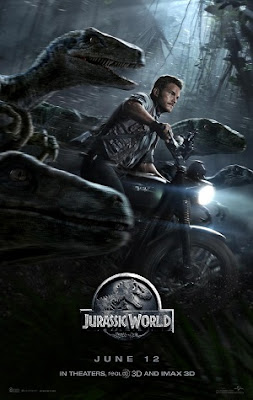 Jurassic World delivers exactly what you’d expect. If you want dinosaurs munching on terrified humans, if you’re dying to see a showdown between a T-Rex and a new, hybrid, more-terrifying-than-the-T-Rex monster-dinosaur, you’ve come to the right place. Jurassic World will take care of your needs. Jurassic World isn’t the revelation you might have hoped for (or maybe you didn’t hope for), but it does have some things going for it. It’s easy to like Chris Pratt, and, for those of us who adore the show Parks and Recreation, it’s pretty gratifying to see him suddenly become a movie star. Also, he’s just movie star material. He’s totally sincere, genuinely likable, and projects equal parts toughness and charm. As I was watching him in Jurassic World, playing a raptor wrangler who can communicate on some primeval level with his fearsome, predatory creatures, I thought: “He’s our next Harrison Ford!” And maybe our next John Wayne. Who knows. But he’s also distinct enough to be accepted on his own terms as a legitimate emerging movie star.

Chris Pratt’s likability is enough to carry a mediocre monster movie like Jurassic World. Pratt good-naturedly undercuts the uptight Claire, the executive (played by Bryce Dallas Howard) who runs Jurassic World but, predictably, doesn’t see the dinosaurs as real living things and lacks the proper respect for them. Claire is a woman who’s too dedicated to her work, which means she’s scheduled for a cinematic come-uppance. Her nephews, Zach and Gray (Nick Robinson and Ty Simpkins) are sent to the park ostensibly to teach Claire a lesson about the value of family. Fortunately, there’s quite a good bit of humor written into her character, and she and Pratt have good chemistry together. They’re both good actors making the most out of not-so-good material. As for the movie’s attempts to preach to us about things like family values or the need to respect nature (important lessons no doubt, but hardly credible in a movie that revels in the exploitation of animals and the sadistic slaughter of random humans), the movie only half-heartedly pursues its tired sermonizing, for which I was grateful.

In fact, I think the best thing about Jurassic World is the way it lacks conviction for all those treacly, feel-good moralisms that blockbuster movies push on audiences. One of the coming attractions shown before the movie was that of the adventure film Everest, in which a group of climbers presumably must battle the elements as they descend Mount Everest. Flashing across the screen were BIG THEMES: Love, Family, Passion, Survival. “Never let go” the narrator reminded us, as if we ever had a chance to forget one of Hollywood’s favorite admonitions. Jurassic World plays along with these almost obligatory BIG THEMES, but it never buys into them that much. That’s not because Jurassic World is smart, even though it wants to be. It may simply be a case of lazy writing. Regardless of the reason, in this particular instance, I liked the movie more because it failed to fully endorse those convictions. You get the feeling that someone making this movie—perhaps one or more of the film’s four credited screenwriters, or the director, Colin Trevorrow—wanted to ditch all the standard family schmaltz and just make a sick, depraved monster movie: an ecstasy of Id.

We probably won’t get anything that depraved from a Steven Spielberg-produced blockbuster, since this stuff is always marketed to children. (Not sure I would take a young child to see this one, parents.) However, I will say this about the adolescent characters in Jurassic World: They’re surprisingly not annoying. Nick Robinson is an incredibly likable actor. (If you haven’t seen it, go back and watch 2013’s The Way, Way Back, in which he starred.) And Ty Simpkins is one of the few boys in recent movies to not be either a smart-ass or a completely selfish little monster. He’s believably worried about his parents’ impending divorce, and yet he’s also thrilled/fascinated by the theme park and has obviously read up on dinosaurs before arriving there. In the original Jurassic Park, the kids are incredibly irritating (as they are in most movies of this sort). But you can never feel invested in their well-being, because you know Spielberg won’t actually kill one of them off. They’re safe, and their peril is always just a plot device for the adults to either get killed themselves or “learn something” about the importance of “something.”

One of the things that surprised me about Jurassic World was its blatant theft from James Cameron’s Aliens. Remember the scene in Aliens when the Marines first go into the complex, and we see their vital signs—right next to their names—lapsing on the screen as they’re being bombarded by aliens? Jurassic World duplicates this, twice. Aliens was a much savvier film politically, though. It was easy to see connections to Vietnam, for example. But in Jurassic World, all the talk about “completing missions” and references to the military feels thin. These quasi-political observations have been thrown in for good measure; nobody’s tried to work them into the movie in a thoughtful way.

But I’ll settle for the lightness of tone that we get in Jurassic World. I never felt pummeled or beaten down by it, and the showdown between the two big dinosaurs will deliver for fans of the series. Those of us who could go either way can sit back and enjoy the performances of Chris Pratt and Bryce Dallas Howard, both of whom are far better than their material.