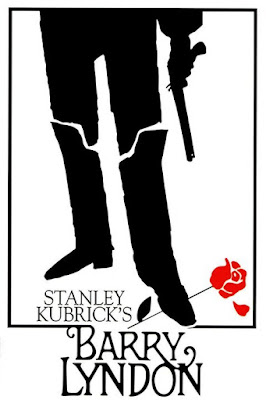 Barry Lyndon is like one of those prickly old spinsters in a 19th-century novel, one who’s got a reserve of feeling buried deep, deep inside her, beneath all the venom and cruelty (and buried, presumably, in order to bear a lifetime of hardships and disappointments). Stanley Kubrick’s three-hour chamber piece, the meticulously beautiful Barry Lyndon (1975), has garnered a coterie of admirers and detractors over the course of its forty year existence. Lyndon performed poorly at the box office in 1975, and reviewers were generally unkind to it. Pauline Kael wrote that “Kubrick suppresses most of the active elements that make movies pleasurable,” calling the film a “three-hour slide show for art-history majors.” 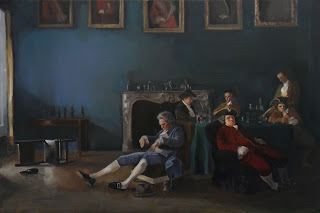 I must admit, I chuckled over that amusing crack, and to a large extent, I agreed with Kael as I sat tonight in front of this sweeping behemoth of a movie. Critics of Stanley Kubrick almost always point to his cold detachment, and indeed much of Barry Lyndon is both cold and detached. However, I found myself emotionally drawn into the film during the final third, when the consequences of Barry Lyndon’s actions finally come calling on him. This is admittedly a long time to wait for a movie to hit you in the right nerve. It’s also tempting—especially because of the voluminous praise this film has acquired over the years from a number of critics including Jonathan Rosenbaum and Roger Ebert—to be too bowled over by the film’s artistry, to reward Kubrick for spending hours looking for just the right recording of a particular symphony, or congratulate him for fashioning every second of this movie like an 18th-century painting. When we go into a movie, all we have it’s what’s in front of us. And even though film nerds (like myself) are voracious consumers of every detail of a movie’s production, it’s ultimately the finished product we must reckon with, not the hard work or the intent of the director. But is it, as Pauline Kael suggests, denying some vital aspect of the movie-going experience to fall in love with the visuals of a film like Barry Lyndon, even if the movie hasn’t hit you on an emotional level? The answer to that question is entirely personal. My hunch is that people who love Barry Lyndon aren’t just reacting to the film on an artistic level. For them, the movie does connect emotionally. It depends largely on your state of mind throughout the film, and how the tragedies, which line up like dominoes in the last act, affect you as a viewer and where your sympathies lie.

William Makepeace Thackeray, who authored the 1844 novel The Luck of Barry Lyndon, is best known for his Victorian classic Vanity Fair, subtitled “A Novel Without a Hero.” Perhaps the same can be said for Barry Lyndon, and it seems plausible that this idea is one of the things which attracted Stanley Kubrick to the project. The film version ultimately shows us the rot beneath the structure of 18th-century British society, and the opportunistic Irish cad Barry Lyndon, played by Ryan O’Neal, learns how to deftly work within the confines of that structure in order to get what he wants. Of course, Lyndon isn’t exactly rewarded for his caddishness. The film wields an appropriately Victorian disbursement of punishment.

But what’s more interesting than the way the movie punishes its characters is the complexity of those characters. Lyndon is by turns a nasty and a sympathetically stupid character. Sometimes life happens to him, and sometimes life happens because of him, and sometimes death is the consequence. Lyndon at times appears passive, even though he possesses a talent for social climbing and the appropriate absence of moral scruples such movement requires. In the beginning of the movie, Barry is reduced to stupefaction because of his love for his cousin, and when she marries someone else, Barry is humiliated. It’s this betrayal which shapes the rest of Barry Lyndon’s story. Is it the woman’s fault, or is it Barry’s stubborn refusal to accept any kind of rejection? 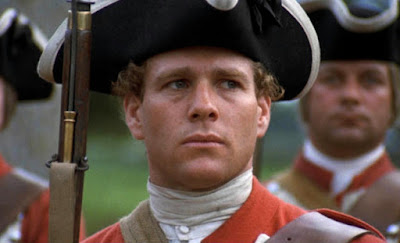 Ryan O’Neal is somehow perfectly cast in the role of Barry Lyndon, although it is, to borrow a line from critic Michael Gebert, “the best case of miscasting in history.” I mean, who would have imagined Ryan O’Neal, the star of Love Story, as this flawed knave? Yet His moderately hunky American movie star looks work for him. (I kept thinking of Channing Tatum, who is proving himself a viable talent, and who is the kind of modern-day actor people often do not take seriously in dramatic roles, because in their minds they’ve boxed him into a corner.) When O’Neal looks at his ex-lover with those puppy dog eyes, we feel for him. But that feeling soon dissipates as we watch Barry Lyndon cheat and lie and abuse people, and only returns near the end of the film, after several particularly tragic events succeed in giving Barry Lyndon his deserved come-uppance.

The film opens with a duel, shown far away and presented with a comic irony by the narrator (Michael Hordern). Two other duels follow; all three have tremendous weight with the outcome of the characters, and in each one, Kubrick adds some new and interesting critique of a society that tolerated dueling and presented it as something genteel rather than barbarian. The final duel is the most intense, exciting scene in the movie, and Kubrick draws it out masterfully. It’s the duel between Barry and his stepson, Lord Bullingdon (Leon Vitali). That scene encapsulates the complexity of the characters, because our sympathies alternate between the two of them with stunning ease as each gains and loses the upper-hand. Kubrick depicts how the choices of life and the structure of society work to mold people into a confusing meld of angel and demon.

Yes, Barry Lyndon has a certain amount of pompous self-importance to it that is undeniable; but despite all this, and despite the clinical way Kubrick works, it’s still affecting and powerful. The film understands the complexities of the great Victorian novelists (namely, Thackeray, Eliot, Dickens, and Trollope), who used sweeping narratives to expose the social evils of their time and were by turns critical and deeply humanistic when it came to nationalism, class structure, and the effects of progress on the working class. Barry Lyndon doesn’t always connect, but it is shattering at times, and beneath the cold exterior, there is humanity, and occasionally even Stanley Kubrick manages to squeeze blood from a stone.