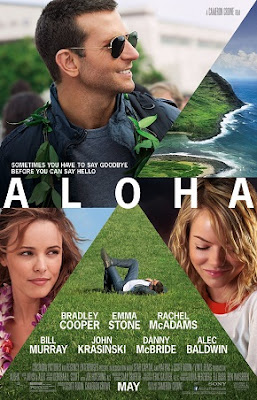 The controversy surrounding writer-director Cameron Crowe’s latest film, Aloha, is becoming more significant than the movie itself. In case you aren’t aware of the backlash against Crowe, it involves his casting Emma Stone as a character who’s one-fourth native Hawaiian. The argument--which is being raised more and more frequently against Hollywood--hinges on the problem of under-representation in mainstream movies of vital, well-drawn characters who are not white and/or not male. Crowe’s response has been considerably respectful and apologetic, but it may also fall under the old adage, “it’s better to ask forgiveness than permission.” Crowe wrote:

Thank you so much for all the impassioned comments regarding the casting of the wonderful Emma Stone in the part of Allison Ng. I have heard your words and your disappointment, and I offer you a heart-felt apology to all who felt this was an odd or misguided casting choice. As far back as 2007, Captain Allison Ng was written to be a super-proud ¼ Hawaiian who was frustrated that, by all outward appearances, she looked nothing like one. A half-Chinese father was meant to show the surprising mix of cultures often prevalent in Hawaii. Extremely proud of her unlikely heritage, she feels personally compelled to over-explain every chance she gets. The character was based on a real-life, red-headed local who did just that.

I must confess, the issue of Stone’s character’s ethnicity did not strike me as I was watching the film. I figured she was an American Hawaiian: someone of European descent whose parents or grandparents moved to Hawaii; only now do I recall Stone’s explanation of her ancestors, as well as her overzealous appreciation for the mythology of Hawaii. (It feels forced.) As I read over Crowe’s statement, I remembered a scene early in the film in which Stone’s character spells her name out loud, pronouncing it for Bradley Cooper’s character. That’s when she goes into a diatribe about her heritage, but it was lost on me. Crowe’s dialogue, particularly in the first third of Aloha, is muddled and even difficult to understand at times. You feel lost in it: it’s like bad old Hollywood writing; and really, the dialogue in old Hollywood movies was never this convoluted or confusing; it was dreamy nonsense. Crowe’s dialogue for Aloha is striving to be dreamy nonsense, and achieving only the latter part of its goal.

Stone plays an Air Force pilot assigned to shadow Cooper’s character while he’s visiting Honolulu. (The why is still a mystery to me, much like many of the film’s wobbly plot elements.) A romance develops between the two of them, only it’s not really credible, and there’s a half-hearted attempt at a love triangle, because Cooper runs into his ex-girlfriend, played by Rachel McAdams, who is now married to pilot John Krasinski. I adore Rachel McAdams, and she’s very good in Aloha, but she’s often forgotten by the movie, and Crowe does a generally terrible job at resolving the conflict between her and her husband, who’s comically incapable of carrying on a conversation. (His taciturn manner serves as the source of one admittedly genius moment later in the movie, which might justify rushing to theaters to see this movie before it’s gone.)

I think this is the first time I’ve ever felt critical of an Emma Stone performance. She’s uneven in a lot of the movie, but this is really the fault of Crowe’s writing. In the first half of the film, Stone talks too fast, like one of those madcap comic actresses from the 1940s, the way that Mary Astor did in the zizzy Preston Sturges comedy The Palm Beach Story. And Stone kind of looks like she’s doing a Rosalind Russell (His Girl Friday) impersonation. She’s a go-getter and a busybody and she’s as crazily devoted to the integrity of her job and her state as Leslie Knope, the indefatigable parks department director of Pawnee, Indiana. But something about the Stone character’s reference to old Hollywood actresses and old Hollywood comedy doesn’t work, and it certainly doesn’t pay off, because by the time we’ve gotten used to it, she changes back into a modern-day girl, just in time to criticize Bradley Cooper’s character for letting a crazy billionaire send an armed satellite into space.

Aloha is an incredibly problematic film structurally and morally. Crowe introduces a lot of big moral dilemmas for his characters, and somehow manages to bungle them all. Bill Murray plays the mad billionaire who has essentially taken the place of NASA; he and Cooper are the only ones who know of his plans to put weapons in space; but in the end, Cooper walks away with impunity because he sabotages the satellite, and Murray is arrested. Somehow that feels too easy, and moreover, too complicated, for what should have been a simple, enjoyable romantic comedy.

There are other moral issues at stake here. Aloha is trying to do some kind of Hawaiian heritage public relations, but it fails pretty miserably. Go back and watch John Sayles’s wonderful Sunshine State (2002) if you want to see it done right. Sayles tapped into the psyche of Floridians, as well as the pulse of the developers trying to make money off of them; Crowe is trying to do the same thing in Aloha. I knew it was a bad sign when the movie’s opening credits showed us vintage Hawaii imagery in a vacant cultural collage as the names materialized on screen. Crowe is only scratching the surface, and George Clooney’s The Descendants did more to tap into the culture of Hawaii than this movie does. And worse yet, Crowe's attempts to address American imperialism in Hawaii have no depth to them: the Americans are the center of this film, and Hawaii and its people are basically in the way. Cooper is, after all, sent to Hawaii to try and sweet-talk them into letting Bill Murray launch his space program there without any objections from them.

Alas, here’s my problem: I walked away liking this movie a little more than my review indicates. It pushed enough of my buttons (especially that sentimental ending, which I won’t reveal, involving a character and his daughter) to give me a decent time. I loved Rachel McAdams and John Krasinski’s characters. I wanted the movie to spend more time with them, fleshing out their personalities and conflicts. I quite enjoyed the brief onscreen moments of Alec Baldwin as an Air Force commander. I appreciated Crowe’s attempts to understand the implications of a world without NASA. All of these ingredients worked to some degree or another, even if the movie as a whole wasn’t successful. It's one of the strangest movie experiences I've had in a long time. But it has charm and vitality, and amidst its many problems, there is a good movie, hiding, needing to be plucked out.
by Jacob Lusk @ pannedreview
Email ThisBlogThis!Share to TwitterShare to FacebookShare to Pinterest
Tags 2015, Alec Baldwin, Bill Murray, Bradley Cooper, Cameron Crowe, Danny McBride, Emma Stone, John Krasinki, Rachel McAdams