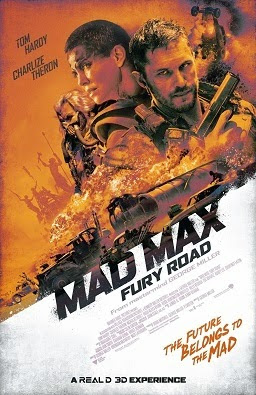 Walking out of the theater after seeing Mad Max: Fury Road, I felt as though I’d been hit over the head. It is one of the few times I could describe a movie as jaw-dropping and actually mean it. The movie pummels you for two hours with exquisite violence in the form of car crashes, bloody knock-down-drag-out fights (of fist and sword and gun etc), and various other acts of carnage that add up to a two-hour-long chase scene. The director, George Miller (who also directed all three of the previous Mad Max films) is almost afraid to slow down, and the few fleeting moments of relative calm that we get, where characters are able to talk to each other or simply catch their breath, are like little oases in the desert.

But as exhausting as Fury Road is, the film is incredibly well-staged and impressively mounted. Miller isn’t showing any signs of the hardening which can befall directors later in their careers; the world of Fury Road is urgent and spare and terrifying, a world overcome by drought in which the humans have become monstrous, parched, shriveled creatures desperate for water. All of the Mad Max movies have tapped into a kind of Hills Have Eyes meets Escape From New York meets The Warriors feel. They have the look and mood of cult movies, and they exude the pleasures derived from the best kind of cinematic trash. (Trash in the most uplifting, happy sense of the word.)

Miller’s latest film is maybe too big-budget and polished to look like those smaller efforts, and far too big, but it does retain that sense of grimy, rusted, dirty, freakish rot seeping into the world. The idea of physical wholeness has been thrown out the window; or maybe it has been redefined; likewise, our obsession with cleanliness and manners and decorum has been abandoned out of necessity. (There are lots of scenes involving people siphoning gas with their mouths, or directly spraying silver paint onto their faces, or taking savage bites out of their attackers or, as in one instance, to free themselves from mutual shackles.) Miller has reduced humanity to its fearsome skeletal remains, and what a fascinating thing it is to watch what the human body will endure or forsake in order to survive.

Tom Hardy heads the cast as Max, the tough-as-nails hero in George Miller’s desert wasteland, who becomes the prisoner of Immortan Joe, a powerful, cultish figure who has total control of the very limited water supply, and doles it out in criminally minute amounts to the parched masses who slavishly serve him. His cult has its own religion, and his devoted followers—the War Boys—believe that dying for him in battle is its own glorious reward. He’s also got a little harem of young women that he keeps pregnant, and it is their rescue and removal from the clutches of Immortan Joe with which the movie concerns itself. The plot is wonderfully simple, which may be one of the reasons that—despite everything operating on full force for so much of the time—we actually develop some feeling for the characters and their plight.

Tom Hardy is a terrific Max. He’s gruff and intense, but capable of softness as we see in a few moments in this film. He’s also a commanding presence on screen, even though he has relatively little dialogue, which comes out of him in quiet grunts and very low-range responses. Hardy is an exceedingly likable performer. He possesses the dumb lovableness of a young Marlon Brando (circa On the Waterfront), minus the arrogance; and he isn't dumb at all. Hardy is so imposing that we’re maybe tempted to think of him as simple-minded, when really he’s strategic and minimalistic in his movements and his speech. When called upon, he can deliver big dramatic touches that pull us into whatever he’s going through. (When he finally tells Theron's character his name, there's something very human and likable in his demeanor; he's clearly tender beneath all the necessary armor and battle scars.)

In so many ways, though, this is not Tom Hardy’s Mad Max. This is Charlize Theron’s Mad Max. Theron plays Furiosa, a woman who’s risking her life to save Immortan Joe’s harem girls. She hides them in a rig and then, during a routine trek, diverts from the route. Theron looks like the daughter of Sigourney Weaver’s Ellen Ripley. She is the human core of the film, although Theron, like everyone else, has little time to flesh out her character. When she leads the girls (joined by Max and another man played by Nicolas Hoult) to what she thinks is a green promised land, only to discover that it to has been encroached by drought, her despair is powerful.

I’ve never been a huge fan of Mad Max as a series, and I’m certainly not a huge fan of the bigness of movies like this. But despite this, I recommend Fury Road (with some reservations) because it’s a smart movie, a generally well-crafted movie, and because it gives its characters ambiguity and integrity and vitality. (One particularly strong example: Nicholas Hoult’s character, a demonic War Boy who turns good, perhaps because he has no choice.) There are so many interesting characters in this movie that I wish I could have gotten to know better. They are not the inane characters we usually get in summer movies. It was a weird and unexpected pleasure to have spent a couple hours with them.

Great review! This is definitely a highlight of the year so far. Hardy was great, Theron was great, Hoult was great. I'm in the process of watching the originals. I hear Road Warrior is good but I doubt any of them will be Fury Road good.

I recently re-watched Mad Max `79 and wasn't that into it. I watched The Road Warrior like 10 years ago and really hated it, although I don't remember why. I probably need to see it again. And I've never seen Thunderdome.